What are your thoughts of running fiber in a house?

I’ve been trying to decide what I’m gonna do when I move.

Personally, I would run Cat6A or higher because I would do it myself and I don’t have the tools or experience to terminate fiber. That said, if you really wanted ports everywhere in every room, maybe you’d distribute some switches throughout the house instead of having one rack in the garage/basement/attic. In that case, I’d have redundant fiber lines between the access switches and the aggregation switch, but still RJ45 for all the wall plates.

Also, of course if you want to isolate surge zones, then maybe you want some fiber.

These guys (above) are going in a rack and will be connected to a local switch via DACs.

I worked as a DC tech for quite a while. When my company ran the numbers it turned out it was cheaper on man hours and waste to just measure your length and buy pre made cables. I would say the real problem would be if you don’t have experience running fiber, there is a possibility you will ruin it while making the run.

We found the same thing. Only time I ever had a guy cleave or cut in a Cat5/6 was when we needed a custom run or a faceplate in a specific / odd location.

Yeah they make nice splicing tools but forced labor is too cheap.

Sgt I would stay away from fiber in the house personally, expensive adapters, cant just plug in any devices without a media converter(think work laptops). You should never really need more then copper can deliver to a desktop and your runs will be pretty short just buy good copper and you should be fine. I dont see data rates for home network stuff going past 10g for awhile and you can do w/e in the rack. (you could run 1 fiber run to your office and the rest copper to give you a nice option if you need something extra fancy at the desk)

Sgt I would stay away from fiber in the house personally, expensive adapters, cant just plug in any devices without a media converter(think work laptops).

I am going to have to disagree with you there, it is a future proof way to go as we get more high resolution videos, streaming and content that lives on the web. It is about throughput and reducing the number of bottle necks.
The same things were said about Ethernet and 100Mbps networks. Coaxail Ring Bus should be fine. No one will need more than 10Mbps for a home network.

Yes the investment in fibre is expensive but I rather be able to just upgrade the ends rather than have to chase new cables in the future. But you don’t need media converters if you use a switch to break out to Ethernet. I my case, I have at least four machines in each room that need to be hardwired.
One of these more than covers the cost of four media converts plus allows more connectivity in the future.
https://www.amazon.com/dp/B08MBZYYKB/?coliid=IGSMXU0VJYJYF&colid=3NITYF5F0AAYG&psc=1&ref_=lv_ov_lig_dp_it

But you don’t need media converters if you use a switch to break out to Ethernet.

Yeah add more power waste to your house and more expensive parts to your network if you want faster connections at those new desktops.

Copper Isnt that expensive and you will get a ton of life out of modern copper. The new tech works quite a few gens back. What possible need would you have in your kitchen for Fiber. Streaming video isnt going to be over 10gibit for quite some time.

Also not able to run PoE

The compromise was the 1 fiber run to office the only place you might actually need / could even use the fiber end potential.

(also if you are running Multi mode the cheaper option, you cant just change the ends there is actual difference in the quality and design of the fiber)

I understand what you are saying but you are narrowly focusing on your use cases. My house has not drops. Running Cat 6 and 7 is a PITA. How long will it be viable. I am also running a Smart Home with lots of Automation. Right now I have a lot of naked cat 5 wires running everywhere and I am using Wireless to support most of the sensors and what not. fibre to POE switches exist. Having the cameras streaming to a DVR takes a bit of bandwidth for highest quality. The exchange students use a lot of network connectivity. Again, my use case is for throughput in the home with few bottlenecks as well as with ease of upgrading in the future.

I can agree to disagree. I am just saying that if you are running cable anyway fibre is not longer in Oil Baron territory as far as cost. If you plan on hosting your own media as well as running a lot of stuff through you network, then 10Gbps now with fibre is cheaper than 10Gbps Ethernet in the future. The cost of precious metals keep going up.

**Edit
Thanks for moving the topic to a relevant thread.

also if you are running Multi mode the cheaper option, you cant just change the ends there is actual difference in the quality and design of the fiber

I am aware. I work with fibre on a daily basis (multi-mode and single). But OM4 is OM4 everywhere. Knowing what I know now, I am willing hedge my bets on fibre in my home(s). It is not for everyone and will not make financial sense in everyone’s use case, in my case it does.

The reality is that I am bandwidth constrained so Fiber would be great for getting all my networked devices down to my rack, but I also still need copper for running things like USB.

So yeah… If I did it again, I would pull at least a 6 strand if not 12 to my office. What is nice is that you can get it all in 1 cable and its about the same size as a CAT6 cable, so if your going to do it, its not much work.

Splicing on ends is not that hard with modern tools, gone are the days of anaerobic or heat activated glue, and scoring tips with sapphire blades. These days you use a simple cleaver, and pop them into a camlock and your done, the optical jell they use is stable for like 10 years. If you really want to do it right you can rent a fusion splicer for a day. Modern fusion splicers are all automatic, simply cleave, and push the button it does the rest.

Why optical display port cables? for remote access or your do the LTT desktop in rack thing?

That is not a very common setup, so wouldnt consider it as a baseline for doing new houses

I am not suggesting people run optical display port, but I did because of my use case.

So yes Linus copied what I do which is have my personal/gaming PC in a rack in my home DC. And because I dont love the latency or the cost I ran direct cables to my KVM rather than run an IP KVM 100’ ish feet. So I have 3 cables and 1 local laptop connected to a 4 port 4k 60hz KVM.

This way my work computer, my personal computer, and anything else I want or need to connect up can be directly connected to my KVM. It keeps all the heat and noise out of my office. 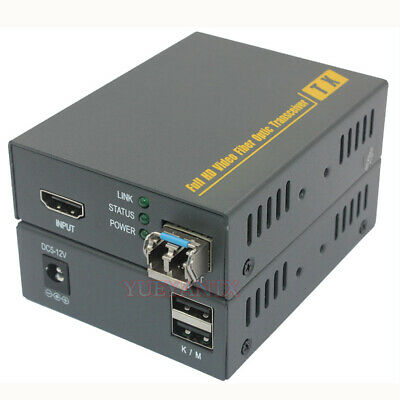 This one uses OS2 singlemode but there are some of these extenders with a multimode SFP for OM4 which would be cheaper.

The Monoprice Blackbird 4K Fiber Optic HDMI Extender apparently only has a 10Gb/s SFP+ so it does not support 4K60 4:4:4 8 bit.

oof… only HD 4k30 is not something I would wish on my enemies.

Yep which is why I went with fibre-optic cables rather than SFP based for my displays. My cables are rated for just over 32Gbs.

Running Cat 6 and 7 is a PITA. How long will it be viable.

Assuming you’re running gigabit, now, and you aren’t right at the distance limits, I’d say for two more generations. 10GbE works over CAT-5E or better, and there is work on 40Gbase-T. Right now that’s spec’d for CAT-8, but like others before it, will likely offer compatibility over lower-spec cables later.

Having the cameras streaming to a DVR takes a bit of bandwidth for highest quality. The exchange students use a lot of network connectivity.

You’re talking about a workload that gigabit ethernet can handle without even trying… 4K streaming video is around 40Mbit/s, you can easily have 20+ cameras on one single segment of gigabit… but they won’t be on their own segment so you can have as many as your have switch ports. If the bottleneck is the DVR, you could bond a couple ports, or just upgrade it to 10GbE to the switch (which you would likely be able to do without even changing any wiring). And it makes a lot of sense to power cameras on PoE, which isn’t possible with optical.

10Gbps now with fibre is cheaper than 10Gbps Ethernet in the future. The cost of precious metals keep going up.

You can run 10Gbps now on old/existing CAT-5e if your runs aren’t very long, so that’s clearly the cheapest option. Ethernet cables have a rather small amount of copper in them, and lots of copper is being freed up as telcoms switch their own networks to fiber.

The biggest expense of any network is in the man-hours, and optical requires more time and effort, and there’s more risk of being damaged during installation, or after.

It makes a lot of sense to install a couple runs of optical if you’ve got long distances to bridge (e.g. between two switches at opposite ends of a building) or if required by codes (direct burial), but otherwise, it’s an inconvenience and extra expense, and makes a lot of sense to use twisted pair for the local, short-distance connectivity.

runs of optical if you’ve got long distances to bridge (e.g. between two switches at opposite ends of a building) or if required by codes (direct burial),

There’s also direct burial cat6/cat6a but that’s usually for POE applications, where you want to bury a cable part way and also power a wifi access point. There’s also fancy twisted pair cables that’ll let you do multigig poe at more than 100m if that’s what you need.

You’d do fiber when you need 25/40/100 Gbps today and when:
a) distance is longer than a DAC will allow (typically>10m)
b) when it’s cheaper than DAC cables
c) when you have worries about compatibility of DACs

For anything else you’d do cat6 or cat6a if you’re a masochist.

This is all “today”.

In you need to think of the future, and you’re digging up walls or are good at drywall stuff, you’ll want to run one or two conduits (flexible pipes, like you’d use for plumbing for example).

Dont forget that Fiber is not subject to EMI so over long runs near or around electrical cable Fiber is preferred.

ethernet over copper works over differential pairs and thanks to tcp and checksumming regular power cables are rarely an issue, even in industrial use cases - it’s fairly robust to most EMI. Usually you’ll want an ethernet cable with additional shielding / and or foil when you’re running cables in thick bundles next to each other (like in this wonderful blog post: 17 Neat Cable Bundles That Will Delight Your OCD )

We do this for our displays around our building. Pretty neat and allows us to use dumb displays.