So I recently inherited a 1985 Brother WP-1 word processor, it features a built in daisy wheel printer and removable keyboard which I just realized uses PS/2 but with pin 2 (which isn't utilized with normal peripherals) snipped. I'm currently waiting on a ps/2 cable to get here for me to start getting into using it's keyboard with my computer.

The word processor also has a typewriter mode in which is just prints whatever keyboard input it gets as it gets it. Aside from mapping the word processor's keyboard to my computer I was wondering if there are programs or languages that would allow me to output data from the PS/2 port on my computer so it acts like the word processor's keyboard, thus allowing me to control the machine from my PC and use it like a printer. I have no real use for a project like this but I want to do it as an intellectual pursuit kind of thing. Any help would be appreciated. 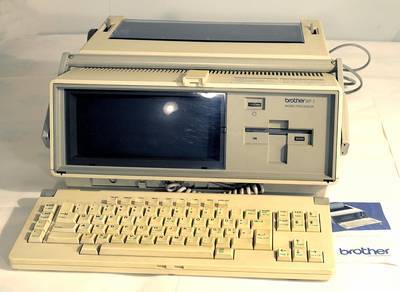 This is a picture of a similar unit, mine has what seems to be a slightly earlier revision front bezel and disk drive.

I'm not sure what you want to do is exactly possible, in terms of having the PS/2 Port of your PC output data.

But, if you made your own splitting cable, to split your keyboards PS/2 cable to plug into the PC AND the printer at the same time, you could switch on the printer when you needed it, and could print what you type.

Hmm, point taken, possibly I could do something using USB? The idea of having the computer do it is so that I can make it print .txt documents.

I want to specify that this isn't an old printer, it's a stand alone word processor with the business end of an electric typewriter built in, the machine itself can do spell check save and load documents ect. It has a CRT display.

Doesn't it have a DB-25 or DB-9 serial port?! If you want to use it as a printer with your computer then all you need to do is connect serial ports and possibly do some configuration / dip-switch settings.

As I recall, that thing may have a PS/2 keyboard plug but that it might not use PS/2 standards! FYI: PS/2 keyboard standards changed about the same time 286's were rolling out which is also about the same time when that "dedicated word processor" was made. So check that it has a XT/AT keyboard switch and keep it on AT if you want any hope of using it with your current modern computer.

Well actually the unit doesn't have any ports on it, it doesn't boot into dos but a hard coded word processing environment. The keyboard cable is removable only on the keyboard end so the cable is hardwired into the machine. The idea of using it as a printer is to make the computer or arduino if I end up getting one pretend to be the word processor's keyboard, put the machine into typewriter mode (which bypasses the word processing environment and simply causes the machine to print what ever key is pressed on the keyboard), then basically "typing" the letters in a .txt file. I feel that there is some confusion about the nature the machine I'm talking about, it isn't a portable computer of any description, it is a closed word processing system and the only accessories that were sold for it were an international keyboard and different daisy wheels.

The goal of this project isn't to use it as my main printer the goal is just to see if I can make it work sort of kind of as one.

you could try to see if it is ps/2 by monitoring the connection (with some op amps in follow mode pointing to your arduino) and then if it is, find some code to output ps/2 with arduino, and work from this, else you have to reverse engineer it by still haveing all wires going to the arduino who logs their state, and then pressing each key one by one to get their code and finally program your arduino to act like the keyboard

oh, and by the way, have you searched it on a web search engine?

I have indeed googled it, and I found less documentation for it than I have found for the Evans & Sutherland ESV workstation. In other words almost none. Thankfully the system includes the manual and even the demo disk, however the manual doesn't give any service information beyond a few defunct support numbers.

I can make copies of the included demo disk but the format isn't readable by PCs or by Macs of the time. If there was some way to essentially brute force the program code off the demo disk for the demo and tutorial programs then I could possibly determine the processor that the system uses and write some alternative assembly for it.

On booting the system with the program disk in the drive if you press Code+Q it will run an in store demo that loops. If you don't press Code+Q and instead let it boot to the word processing environment you can run a tutorial by pressing the File key, letting the index menu load, then pressing Code+T. I have theorized that either system's architecture simply has non standard programs hook to a short cut key in the index screen but it could also only run two separate programs from the disk and have Code+T and Code+Q simply be hard coded commands.

I have attempted to open the system up to see if I can determine the processor it uses however I just can't find the screws that remove the top, there is a metal panel on the bottom with access to a bunch of soldered points but without a maintenance manual (something about as easy to get ahold of as 3DFX Voodoo 6) I have no idea what the points are for.

Reverse engineering the keyboard has been my main plan for some time and is probably what I will end up doing, I was hoping to find a way to do it through my computer's PS/2 or through USB so I wouldn't have to go out and get an arduino.

do you have a parallel or serial port on your computer?
Because you could use it, and it would be easier than via usb, I think.

you could also open the keyboard, get the electronics out, replace the broken connector, map each key to a transistor, and command them via some multiplexers (yes, that would mean a lot of connections.)
cost would be around 15€ (10€ demux, 3-5€ transistors, 2€ wires/plates )