When I first built my pc occasionally it would hard reboot while gaming at first I thought it was just driver maturity for the X570 platform. Six months later into the build the issue seems to be becoming more chronic. Any help is greatly appreciated.

Drivers are all current. Just did a fresh install of Windows 10 Pro 64 Bit. Ram has been tested with Mem86 and no errors present. Default values set in Bios.

Windows Event viewer only says the computer shuts down unexpectedly.

A couple of things happen to a PC whilst gaming.
The power draw goes up and so do the temperatures.

For the power I suggest you use the two separate PCIe GPU cables rather than use two plugs on one cable. That can deliver current with less volt drop and may even load the PSU more evenly. Do make sure all the power plugs are in well. Maybe see if the 12v that powers the MoBo can be plugged in a different socket. The PSU came with two 12v power cables, maybe use the other one or even use both if possible.

As for the temperatures, see if you can get some monitoring happening whilst gaming. There are various tools for that. You can see the last temperature recorded before hard reset. You might try running the PC with the side off and seeing if it runs for longer.

Problems with power usually happen quickly, as soon as the power usage spikes. Problems with temperature happen once the heat has built up and take longer. Once the PC is hot the next event happens quickly.

You might want to check the BIOS to see if you have any sort of temperature shutoff enabled.

I built a RYZEN 5 system with a VEGA card and after leaving it on autopilot on rfactor racing for 2 hours the CPU shut down. It was a RYZEN 3600 with the stock cooler. I replaced it with a really good heatpipe one from a RYZEN 7. This fixed the problem. When I factor in the price of a cooler it maybe worth buying the RYZEN 3600X for my next build, not because it’s faster but because it has a decent cooler.

Try running FurMark and Prime95 simultaneously, could be power supply.

I had similar issue with my 5700XT Red Devil. It would be fine in benchmarks and 2d applications. But, in games, it would frequently and randomly crash the whole system to a green screen.
I thought this was down to the notoriously bad Navi drivers. However it turned out to be a hardware fault. I RMA’d the GPU and the replacement is perfect!

If you’ve got an alternative GPU to try, replace the 5700XT, and see if the issue persists.

My RX 590 automatically lowers the clocks of the GPU when Furmark is running. Not sure if the RX 5700 is the same way but it might be a good idea to use something like Heaven instead.

As a quick update for down the rabbit hole.

Thanks for all the help it was truly educational. As a side not while I am glad to have learned new things wish the out of the box experience was a little more smooth than this lol. 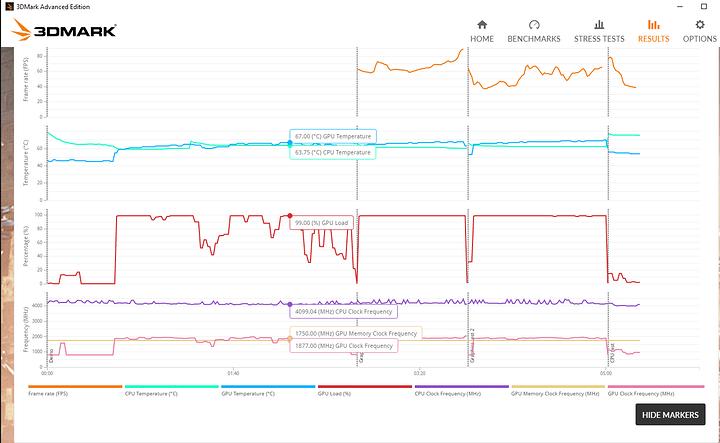 Just a quick status update. Problem started to continue even with the manual fan curve set. Sent in the motherboard and graphics card for RMA. Received both back. However, the motherboard that Asrock sent me back is not detecting both ram sticks. After updating the bios to version 3.40 and trying one stick in the four dimms both B1 and B2 do not work and cause the computer to go into a boot loop. As a side note on the bios it shipped with version 2.70 the computer would flag a ram training error.

The problem persists after tearing it down and reinstalling the CPU incase the CPU wasn’t situated correctly. Have ordered a CPU to try to see if it is the CPU that is messed up or the motherboard they sent back to me.

As a side note when speaking to Asrock to see if there was anything wrong with the first motherboard the rep said everything checked out fine yet the motherboard they sent back to me had a different S/N than the one that was sent in and also included a black skuff on the IO block. The video card received from Power Color matched the same S/N as before have not called them yet to see if anything was found wrong with the card when it was sent in but will contact them as I am curious. Found it interesting that the RMA motherboard came shipped with an anti static bag when the original didn’t.

As always any thoughts or comments to help diagnose the issue is appreciated.

If you have a PCI SSD you may also wanna check in the manual what SATA ports your are supposed to no longer use (if any).

This might sound stupid. But I had this problem with an Asus x470 crosshair vii hero, I think. It used to turn off sometimes. I say ‘I think’ because the way I figured this out was when I did a UEFI update and it stopped booting at all until I unplugged my sata drives. Then I read in the manual that two of the sata ports are not to be used when plugging ssds into nvme1/2.

It now works like a charm since then. But I am not quite certain wether it was fixed by the UEFI update or me plugging the drives into different ports.

So unplugged all SATA devices (2 hard drives and one dvd rw drive) and put in the new CPU (3900 XT) same issue. Called Asrock back they were quick to transfer me to tech support and they are unsure what is causing the issue as the board they sent me checked out. Currently they have asked me to send it back to them with the RAM to further diagnose. I inquired about them covering shipping this time and they said they would.

Hopefully they can figure something out. Will update with a post in case this experience has been helpful to anyone. If nothing else is a entry regarding their customer service.

Quick update for everyone. The 7th business day has expired from the date Asrock marked receiving the RMA and still haven’t received an tracking number, so called Asrock, the rep put me on hold for 11 minutes and then the line went dead.

Followed up the next day, and was informed they are still testing the board and that I should receive it sometime this week.

To be fair to Asrock their language in the RMA does state “approximately 5-7 business days for processing”.

This experience makes me wonder if they are out of motherboards due to supply shortages. Currently, Amazon no longer carries it and B&H does not have an ETA for receiving more.

Fingers crossed Asrock sends back a working motherboard with the processor and RAM in working order.

After two motherboard RMA’s and a graphics card RMA all appears to be operating normally.

Power Color did let me know that the graphics card was indeed faulty but wouldn’t go into specifics.

In this instance I probably would have been better off paying for the insurance at check out unfortunately. With both companies requiring the user pay shipping to them on the first RMA it was a little aggravating due to the price of the components.

I am a little disappointed in Asrock for sending me back a motherboard with bad ram slots.

Knock on wood this is the last of system issues till the next upgrade.