This is going to be the movie/film review thread. We tried having individual thread for each week’s movie. From now on post here.

Just be sure to clarify what you are reviewing and discussing to not confuse anyone.

This is the companion thread to the poll thread for discussions regarding Dr. Strangelove.

This is the cinema club’s companion thread for Knives Out. Be warned there may be spoilers in this thread. So again you have been warned!!!

Check out next weeks poll @

Knives Out is 5 dollars USD to own via VUDU. Be sure to pruchase UHD even if you dont have a uhd display/tv. it can always do lower res but not higher if you don’t but it as UHD.

In addition, If you’ve got Amazon Prime its currently free to watch.

This is the companion thread to the poll thread for the cinema club. Thoughts and reviews and comments for War Games should be posted here.

Hey, I wasn’t able to watch a copy of the movie this time, but something that bugged me, was the events take a while to happen.

Obviously the kid hacked in, and accidentally triggered the thing.

But, once they got the sole programmer Falkener (really? only one guy, no tech support?) to give Brodderick legitimacy, they didn’t validate the intelligence via the CIA…

Saying that, they really should have had a team on the woppr, and the team should have known the program wasn’t triggered legitimately…

[moved from other thread]

It would make sense, but maybe back then having a team like that wasn’t as viable as it is nowadays. I’m in agreement though about how the connection and such was validated as legitimate. Very strange….

For the time, its an interesting tale about how a ‘computer error’ could lead to some form of catastrophic disaster. The idea that a wargames computer would be running a simulation and then ‘decide’ to apply that outcome to a real launch as a fault of the computer. The idea that its artifical intelligence had to learn for itself that there is no winner in nuclear war lays bear the crux of the intent of the movie as two fold. First, computers cannot be trusted with decisions so dire in nature. Second, that nuclear war will never lead to anything but mutually assured destruction and should therefore never be used.

I was 11 when this movie came out. We bought our first home computer in 1982 and as such, I was mesmerized by any movie/tv show centered around computer technology. I had a great wave of nostalgia re-watching certain segments of this movie. At 20:31 you see David pick up an 8 inch floppy with the icon of an elephant on the dust jacket. That was a very popular brand back in the day called EMS (Elephant Memory Systems). Their tagline was, “An elephant never forgets”. At 20:49 David has to attach the phone receiver to an acoustic coupler (the modem of the day). Its speed was probably no more than 300 baud (characters per second). A whopping ~300 bits per second on average or 0.0003 Mbps. I never had an acoustic coupler. By the time I got a modem in 1983 we had native phone line interfaces, but we did not have automatic dialing. Instead, you had a little switch box that came out the back of the computer and you had to toggle it between ‘originate’ or ‘answer’ mode. If you were calling another system, you would dial the number and when the tones started you would toggle to ‘originate’ and hang up the phone when you heard your computer begin to emit its own tones. Similarly, if someone was calling your line, you would toggle it to the ‘answer’ mode. I find it humorous that we went from mechanical keys in the 80s to the carbon membrane keys and now we’re back to mechanical/optical keys. Sometimes the idea of the old technology was in fact better that the modern equivalent. I also remember being disappointed about keystroke sounds. In the movie, every key press is followed by an audible ‘beep’ from the computer as well as any output being put on screen was also teletyped with a corresponding ‘beep’ sound effect. This was in fact not the case. Sad really. I rather liked that concept back in the day. Lastly, so much phosphorous! I haven’t seen a phosphorous display in a long time. I know there are still a lot of legacy systems that have a few running, but they really are from a bygone era. I remember displays like the one from my parents store. They spent so much time on the order entry screen that it became ‘burned in’. The phosphor left a permanent etch that still showed as a faint outline even the they were turned off.

Anyways, there is my 2 cents. Better late than never I suppose. 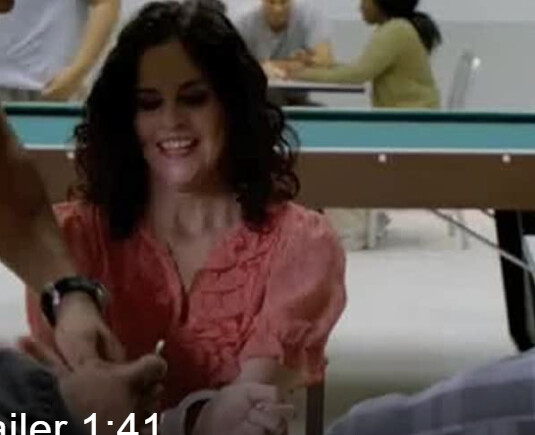 the love interest in war games is the psychotic woman in psych. Neat.

Raw corn. lol I am taking a break on the movie. I am trying to watch when I’m free.

So far it is a teen scared shitless of what he did with ai.

Decent movie. I enjoyed it. How about a nice game of chess.

I wish I saw it sooner. In my younger years.

I think the fear and use of ai has always existed. But in this case they didn’t know it was ai, that it was just a simulation machine. But in fact it learned via machine learning or what we call deep learning now.