Google Chrome, being the majority browser, is able to steer internet standards. They (Alphabet, Goolag) WILL use this power to break the internet beyond repair. An example of how Free Software would not be able to fix malicious design is DRM, sure you can turn it off and remove it from the browser - good luck using services like netflix. It is possible to see a future where Goolag steers web standards to thoroughly nest themselves deeper into the very foundational fabric which makes up the internet thus making it impossible to eject from their tentacles and hence also their control over us, their cattle. And those changes, just like DRM, can be removed, but will anything on the internet work?

Peer into my crystal ball and behold the darkness: Search the following

Wake up proles! Gather your pitch forks! Perform the exorcism, purge the Chrome cancers and cleanse your machines with Firefox. Join, fight and promote the battle for freedom! We need numbers people! Numbers! Numbers! NUMBERS!

With computers and the internet becoming a single point of failure for our day to day existence is it paramount to not only keep analog alternatives alive (use cash) but also to ensure the gate-keeper software we use (operating systems -hello Debian GNU/Linux, browsers etc) is Free/Libre Software controlled by non-profit organizations (who are not controlled hopefully) and not giant corporapetions.

If we build a turn-key totalitarian world and things go dark like in China with the social citizen scores you can never escape - no way to ever reach critical mass in resistance. It is a one way street: this time, if we lose freedom, it aint coming back. Sooo, we need to collectively pull our heads out of our behinds and see the Free/Lible Software light before it is too late. If we sell our freedom for convenience… the chains won’t be coming off.

Chrome: Brought to you by the censoring, monopolistic, manipulative tech demon known as Goolag.

Firefox: Brought to you by a non-profit rebel alliance desperate for your support in the fight against the empire, not perfect but it’s what we have.

“It is every citizen’s duty to poke big brother in the eye” - Richard M. Stallman.

Got any evidence to support this claim?

Or you just gonna screech like another stallmanist freetard?

Can’t be a Stallmanist, the post refers to Firefox. Any self respecting Stallmanist would have recommended GNU Ice Cat

Bit of an odd first post, but welcome to Lv1techs forums all the same :^)

Welcome to the Forvm. Just a word of warning, we like facts.

It’s worth mentioning Google Chrome is based off of the open source project Chromium, which is still in very active development.

Forks of Chromium have gone through all lengths to remove any trace of Google or their tracking (which is minimal) that has been put in to the open source Chromium project.

Any audits that come along Integrating Google are caught before they’re ever integrated in to these forks.

One good privacy/minimalist oriented Chromium fork is Bromite. I use it on all of my devices, and the author makes a great replacement for the built-in webview of Android removing analytics and Google ties.

Netflix is a proprietary service, and they’re the ones that enforce the DRM. Not Google. They also actively ban any and all VPN providers, a move that goes against personal privacy and rights to access the internet however we see fit. They also enforce region-blocking, a regression in modern digital marketing tactics. They’re all around a service we should not be supporting IMHO.

I recommend building a NAS for your home, storing all your media on a large ZFS pool and using Kodi media center as the front end to replace Netflix.

What is the actual point of this topic?
Because i cannot fully figure this out.

Would you like to provide some recent news articles,
or other sources to feed the discussion?

Also welcome to the forums.

Any self respecting Stallmanist would have recommended GNU Ice Cat

I’d just like to interject for a moment. You don’t need to be a Stallmanist to recommend Ice Cat.
I use Ice Cat as the only browser on my laptop and phone, and I don’t even like the guy!

Feels like a sales pitch to me. But kinda pointless because the pretty much preaching to the choir.

@veraximus doesn’t go far enough though. Remove Windows and switch to a BSD distro or Gentoo.

Remove the spyware that is mainline andriod with AOSP, Sailfish, Postmarket or Plasma Mobile. Self host your services. Run your firewalls as a whitelist. Use TOR and VPNs if you truly care about privacy. .

Wear a face mask so CCTV can’t recognize you. Change up you walking gait becuase that is another way of tracking you.

Unhook your residence from the grid because they can make a profile of your habits. Grow your own food.

And place your electronics in faraday cages.

Just using firefox is a half measure.

It’s worth mentioning Google Chrome is based off of the open source project Chromium, which is still in very active development.

Chromium is still in active development BECAUSE GOOGLE OWNS CHROMIUM. Chromium is simply the open-source variant of Google Chrome. With Google in control of Chromium, even if someone forks Chromium, Google still holds control of the software unless you decide to completely fork Chromium, which no dev does; all devs rely on Google pushing security updates to Chromium, and the third-party applying their custom changes.

Simply removing analytics and phone-home to Google on the Chromium browser does NOT loosen Google’s control of the web. Utilizing Firefox, creating your own search engine, or forking Chromium and never relying on Google for security updates are the true alternatives to avoid helping Google.

Regarding everyone asking for sources, it’s not hard to find sources about how Google is using Chrome in monoplistic ways to push away competition (in the browser market and advertising market) and influence how the internet is run. Not everything that Google influences on the web is bad (Chrome and HTTP), but it just goes to show the power that Google holds.

Microsoft is hopping on the monopolistic ship as well by preventing browsers that aren’t Chrome or Edge from accessing web.skype.com

Google slows downs webpages that it owns (ex. YouTube) when not run on Chrome(Breitbart source)(PCMag source)

Your comment was very uplifting to read TheAlmightyBaconLord! Was feeling a bit hopeless with the other stuff I read haha.

BTW other people, I wasn’t allowed to post links, probably because I’m still new here. That is why I posted things to search like: “google-chrome-has-become-surveillance-software-its-time-switch”

I’ll come deal with the other comments later.

Eh… Brave is the way forward. Firefox is great as a second option but in terms of performance it just doesn’t compete in my experience.

Chromium is still open source, if you don’t like Google, fork it.

Please don’t throw around misinformation. Google does not own the open-source chromium project. They just contribute a lot to the development naturally since they use it for their primary web browser, Google chrome.

Microsoft Edge is also based on Chromium, as is Opera and other browsers. Google DOES NOT own chromium, and Chromium does not contain all the spyware you seem to be fear-mongering about.

You have been corrected. 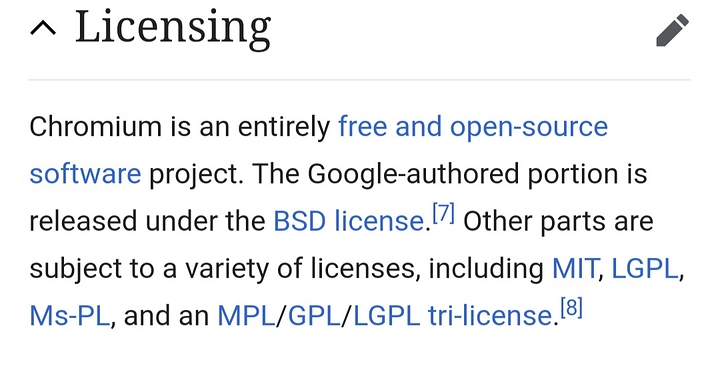 You are preaching to the choir here…

What you posted simply says that the parts of the code that Google wrote is BSD licensed, with the other parts of code (not written by Google) uses different licenses.

Conviently, that exact Wiki page states that “Chromium is from Google.” Google runs the Chromium repo, they decide what gets published, and what pull requets they decide to take.

I’m sorry if you do not understand the wording of that Wikipedia page, but yes, Google does in fact own Chromium, just like how Mozilla owns Firefox, and Microsoft owns Edge.

Here’s the official Chromium repo, if you really felt like you needed more proof that Google owns Chromium. Take a look at the URL, pound sand, and stop throwing out pure bullshit in an attempt to seem smart.

@TheAlmightyBaconLord You’re right that Google controls the project, but they do not own it, as is shown in my provided picture in my previous post.

You’re making several statements however that don’t line up with the evidence. You’re also assuming that all 3rd party chromium developers are somehow incompetent in building their own desired browser off of the chromium source code.

Evidence, please? Otherwise I have no reason to stop using a perfectly good open source chromium-based browser, that is more capable in many ways compared to Firefox, particularly on my mobile Android device.

Please keep pettiness out of this forum and read the rules. No belittling is necessary here and you just discredited yourself in the conversation by resorting to belittlement.

You’re obviously not looking for a constructive conversation. Goodbye.

I’m sorry if you do not understand the wording of that Wikipedia page, but yes, Google does in fact own Chromium, just like how Mozilla owns Firefox, and Microsoft owns Edge.

Here’s the official Chromium repo, if you really felt like you needed more proof that Google owns Chromium. Take a look at the URL, pound sand, and stop throwing out pure bullshit in an attempt to seem smart.

You just “proved” that Google owns/runs the central repository. Or at least the DNS record pointing to it.

Owning the respository does not mean you own or legally control the code base/intellectual property.

It’s like me claiming that i own everything currently contained within my house that I am renting out to some third party. Or that i own the intellectual property rights to the contents of the books on my bookshelf, because i have copies of them in my physical possession.

I’m sorry but that’s simply not how it works.