Okay so the title sounds a little intimidating to people who are new users, but don't let it fool you reason being is because we get a lot of questions saying "Whats the best distro" Short answer none, long answer nooooooonnnnneeee!

Each distro to its own can beat another, and while we all have our differences and opinions and what one may say is not what may fit you.

So this is where the dont ask, do comes in, actually start by asking for a list of distros, as mentioned below

Okay now you have a list, get a VM and try them, if you want bare metal them and run them for a week on your PC, see which is best for you.

Doing this you learn about many different aspects of Linux, you are distro wise and can use different package managers, and begin to understand the dynamic abilities of Linux and its setup.

The distro its self may need some specific changes to suit your needs, So change the desktop, the browser, the software, the kernel, the nature of drivers, strip the kernel if you feel brave enough, re-compile the thing and make it run to your hardware only, hack it, break it, fix it repeat, get on the forums and ask for advice on what you should do about making a distro suit your needs.

once you have the basics, and oh that above wont cover the basics, give the knowledge back to the community, help others and grow your reputation, while still learning, it takes years of practice and is well worth it.

But don't start by asking "What distro is the best" because there isn't one! distro hopping is the only way you will find out!

this is pretty good point. each distro does have its strengths and weaknesses. personally i like mint, cinnamon edition. i do agree the best way to try a distro, just throw it in a VM. worse case you f up during install and gotta delete it and start over.

I would try Fedora but the installation always messes up somehow when I install it in a VM.

To run Fedora in a VM you HAVE to install it from a USB, It will not work from a disk.  There is some documentation about this on their website.

This thread speaks the truth!

The important thing is to take control over your hardware and computing life by using linux. The distro someone will use is a matter of convenience.

At first, most linux users will go through a phase where they don't really have full grasp of the operating system. This is normal, and it's a good thing, because it stimulates the experimental and educational aspect of discovering the enhanced features and power of the platform. Computers these days are pretty powerful devices, and moving from a software console like Windows to a full-blown computing environment like GNU/Linux, is quite a revelation, that doesn't come immediately.

For that reason, many users start with distros like Ubuntu or Mint, which are closer to software consoles in their general configuration, in that they make a lot of choices for the user. A starting linux user might appreciate those functions, an experience linux user will want more direct control and run a tighter ship on his systems. One of the huge features of linux is the speed with which things can be set up or configured. This is true for the GUI centric operations, but experienced linux users will quickly gravitate towards CLI, because the speed of CLI for getting things done is unsurpassed. For a lot of users, bloated distros like Ubuntu or Mint will soon become a ball-and-chain, and they will switch to other distros, that may sometimes need more manual configuration, but also are much leaner and meaner, and thus offer better performance and more precise control over the computing experience.

It's very easy to make your own distro. You can go to the SuSE Studio website, and configure your own distro, then try it out on a virtual server on Azure or linode for free on that same website, and download your distro and share it with others. You can also build a linux from scratch by going to the linux from scratch website. So there is even an easy solution for those that can't choose between existing distros...

I personally use different distros all the time. That depends on the purpose and the hardware, but also on the fact that I want to keep up-to-date with the different big families of distros, and don't want to miss out on new features, and at least want to try out everything that interests me.

There is a big difference between using linux for work and using linux for fun. Linux is one big development environment, and offers an incredible amount of tools to make your own working environment and for getting things done that aren't even possible on a software console. However, for those that don't need the dev tools, it also just offers the pure performance, safety and security, and ease of use, that software consoles can't provide. That's why there are so many different GNU/Linux distros. It's all about people customizing the software for their own use, then sharing it with everyone. The addition of the fact that everything is freely shared and the fact that so much different configurations are possible, leads to an incredible portfolio of distros and applications.

Linux is often said to be fragmented, but that is not true. Any linux distro will work in any environment and do what it's supposed to do, without any limitations. The extra features and ease of use that particular distros offer for particular tasks, is not to be confused with fragmentation. Windows is fragmented, in that Windows is never Windows. If you want to run Windows on a server, you need to buy another version of Windows that uses other tools, if you want to run Windows on a >16 GB RAM machine, you need another version of Windows, etc... and there are serious intercompatibility issues with different Windows versions, even from the same generation. Application software in Windows has to be looked for from all kinds of different sources, there is no unity in packaging, there is no unity in software sources. All these kinds of fragmentation don't exist in GNU/Linux. Choice and freedom is not fragmentation, it's quite the opposite, because everyone can freely use the distro and applications he/she wants, whilst still maintaining perfect compatibility with every other platform (also Windows and Mac and every other operating system under the sun), and whilst being able to run it on every hardware under the sun, all of that using the same platform, without ever being confronted with any commercial licensing fragmentation of compatibility-based fragmentation or budget-induced fragmentation. If you've bought a really expensive peripheral in 2003, chances are it's not compatible with present Windows versions anymore, but when you're using GNU/Linux, it'll just work as it always has worked, just faster and with more features and security than in Windows software consoles.

I know you shouldn't trust 4chan but this a reasonable guide ... 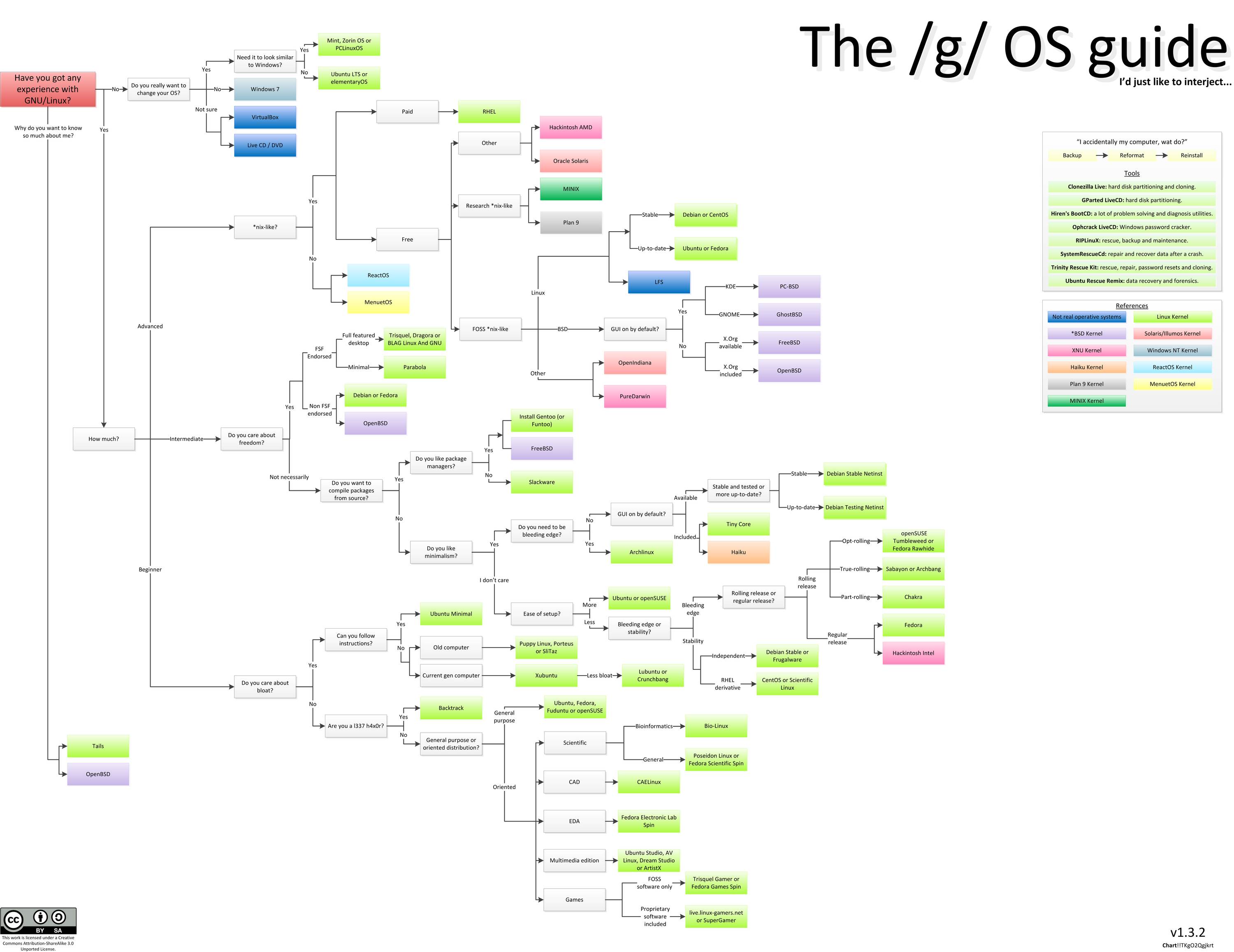