Note: The build will be a separate thread, this is just a story, a warning and tips for those ordering from Aliexpress. If you don't know about Xeon mods, this would be a nice intro: link

Two pre-modded Xeons from Aliexpress, ordered at the same time from the same seller:

They're even cheaper now. As of today, an E5430 ($8.98) is on its way as well. I'll test all of them underclocked, stock and overclocked for performance and power draw, and post the results. I'll also probably test all of the above under different cooling solutions if I have the time. The build has just started, so it may take a while.

But anyway... a week ago these two arrived crammed into a single plastic CPU holder (ironically AMD lol) and sandwiched in between them was one of the two bags of thermal paste. If it can even be called "paste", 'cause it looks like machine oil to me... I guess one of the surface-mount components ruptured the bag.

Naturally, I did a photo session and opened a dispute for a full refund. 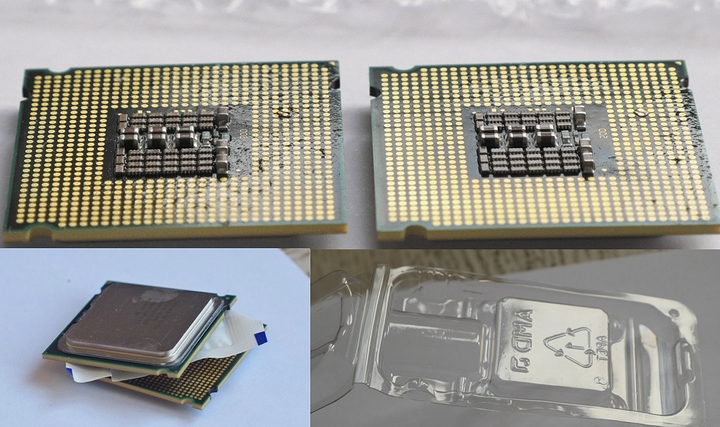 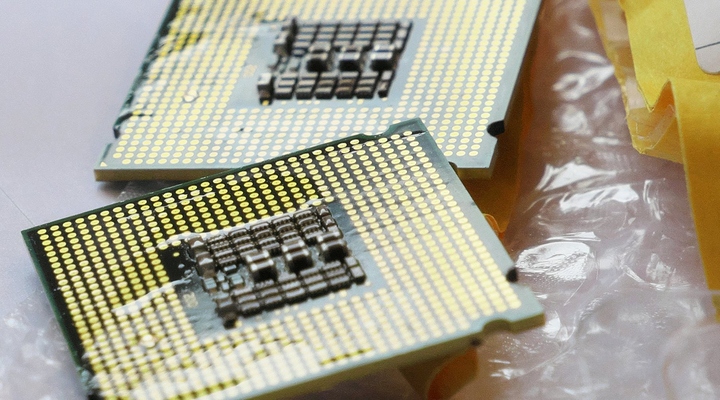 I wanted to see how far they would go. Just for giggles and to see how it all works so they don't screw me on more expensive items.

In the dispute I'd stated that I didn't want to clean them and that I was afraid of frying my motherboard so testing them was out of the question. I didn't feel like experimenting with alcohol and a guy I know said he had some petroleum ether which was supposedly better (for this purpose) than the ethyl alcohol I had in my home. He cleaned them, tested them and electrons be blessed - they both work

I've read (here) that they do like to "buy" people's trust with the small stuff and than slap you when they screw up something for more expensive items. That was in line with what I'd experienced.

The disputes for E5450 and L5420 were opened separately but I'd posted the exact same compiled photos as evidence. Aliexpress judgement deemed that the E5450 dispute was invalid and asked for further proof of the packaging to exclude the possibility of in-transit damage. Which I'd provided and proposed a near 80% refund of $20 . The second (L5420) dispute they deemed valid and gave me two options:

So after a week, the seller didn't counter my $20 refund proposal and Aliexpress ruled in my favor and accepted the last proposed figure ($20). The other dispute, however, had to end by me choosing one of the two offered options, so since I got $20 back on the E5450 and cleaned/tested both CPUs, I just accepted the partial $5.75 . So in the end, I got more money back for the E5450 (80%) than the L5420 (60%). An interesting turn of events in any case.

I don't think I'll be ordering any items >$35 per piece from Aliexpress after this. The dispute process is too chaotic. Bryan from Tech City has had some really good luck with his builds although the guy that cleaned my CPUs told me that the cheap memory like the one Bryan bought often starts failing within a year of usage. Caveat emptor.

Imperative when buying CPUs on Aliexpress:

I guess some of you had more luck, but these things with online shopping seem to happen frequently to me. I swear it's like I'm a testbed for Murphy's law.

How? You gave the same evidence for both disputes.

I do see you later got that turned around. But it is weird they did invalidate it at first.

After some googling I found that article I linked where it said that they behave differently for more/less expensive items. E5450 was more expensive, so they probably decided to probe me out... I budged, lowered the proposal from $24 to $20

I should get around to throw up some 4.5ghz benchmark numbers when I put my 775 system on my testbench.
X5470 all the way.

For my build I specifically avoided the "X" Xeons. Really wanting to know what the low-mid TDP models could do and how they measure up against each other in both synthetic benchmarks and games.

But it would be a welcome addition to have some X benchmark numbers.