Chinese "KingSpec" NVME M.2 SSD, should i buy it?

I need a larger SSD for my PC, 240gb is just not cutting it anymore.
I’ve searched the local market (Brazil) just to find insanely overpriced models, so i parked the idea for a while.
Yesterday i was talking with a dude on a local PC-focused group on FB and he mentioned this, a “KingSpec” M.2 NVME drive.
I got particularly interested in the 512gb model, since the price of it on Aliexpress is comparable to that of an (at least on paper) inferior WD Blue M.2 drive on Newegg.
Has anybody tried one of these before? I found just one person on the local groups that has the 256gb model and he told me its been more than a year since he bought and he has no problems at all.

Considering your situation, and as long as you are willing to potentially loose 100 bucks on the deal, I say go for it.

If you were in the US, I would probably advise otherwise, but I know everything outside the US for PC stuff is insanely over priced.

I would say go for ADATA SX6000… It’s an NVME, kinda slower, but it’s a reputable brand from a reputable store. I had quite a lot of lost packages from Aliexpress…

Could be an option, its like US$5 more and it comes from Adata, add like US$20 of shipping to Brazil via Shipito and i’m set!

I had quite a lot of lost packages from Aliexpress…

Can’t say i’ve lost anything from there, and i’ve bought quite a lot of stuff, sure, some stuff take like 3 months or more, but it generally arrives.

Potentially lose as in it never arrives or stops working after a while? I asked the seller and he said he will cover the 3 years warranty (mentioned on their website) even after it arrives in my country.

Reading the russian auto translated Aliexpress reviews, its ill advised to use the included heatsink because it actually retains the heat instead of dissipating it, ayay…

As far as warranty goes, I don’t even trust warranty I get from a reputable seller let alone someone off allied express.

There are a couple of things with this drive that weird me out. The kingspec website lists a 128GB, 256GB, and 512GB model at the top of the product page, but then only lists 240GB and 480GB models on the spec sheet.

And the spec sheet is not very redeeming. There is no SSD controller listed, which I really would have liked to know because of the IOPS and Sequential speeds listed. The Sequential speeds of 2400MB/s read and 1700MB/s write are respectable for a ‘budget’ NVMe drive, but the IOPS numbers are pretty low. I mean its quoted as 76k 4k read IOPS and 96K write, which are lower than a lot of Sata drives. For comparison, the Samsung 860 evo which is a Sata 6gbps drive, which alike the kingspec has ‘3D TLC’ flash, has a higher 4k read at 98k IOPS compared to 76K IOPS on the kingspec, and is pretty damn close on 4k write IOPS at 90k which losses out to the kingspec’s 96k.

But when you compare the 4k IOPS of a ‘budget’ NVMe drive like the Samsung 970 evo 256GB, you see that the Samsung NVMe trounces the kingspec with more than 3x the 4k read and write IOPS.

And the weird thing with the low IOPS is how relatively high the sequential write speeds of 1700MB/s are. Usually for a TLC based drive like the kingspec, you need to have a buffer of very fast RAM in front of the actual TLC flash memory to sustain high sequential write speeds, because of the limitations of TLC flash. But a RAM buffer usually also lends itself to higher 4k read and write scores. Which makes it ever weirder how even relative to ‘budget’ NVMe drives, the kingspec is falling flat on its face with the 4k scores.

Personally, I’d buy sata from a reputable brand or save for the name brand NVMe. Honestly the benefits of NVMe are all in the 4k speeds, not the Sequential speeds (unless you have a specific usecase like using the drive for high resolution, low compression, video scrubbing or regular large file transfers over a very fast connection like 10+ gbps ethernet).

The spec sheet for this drive weirds me out frankly. The numbers don’t all make sense, there’s no listed Flash supplier, and you don’t know the controller model or brand.

Oh yeah, and the listed “Mean Time Between Failures (MTBF)” is almost half of the listed for the western digital blue you are comparing against. Doesn’t seem like kingspec is expecting these to survive nearly as long as western digital or other name brands expect of their drives. The WD Blue you linked lists 1.75M hours between failures, while the 970 evo I used as comparison lists 1.5M hours, compared to the Kingspec at 1M hours.

And yes I know the 970 evo is a much more expensive drive, the point of using it as comparison was that it is also a 3D TLC based NVMe drive. If you’re on a budget I wouldn’t recommend buying the 970 evo because well, it’s outside your budget for a 500GB. But when you compare the kingspec to the name brand drive that is on paper similar, you really start to see the weirdness of the kingspec on paper.

Thanks a lot for the comprehensive explanation @TheCaveman, otherwise i just wouldn’t have known what i was dealing with.
I don’t actually need a whole lot of speed, even my standard 240gb SSD Plus does more than enough for me when it comes to speed, its just that big numbers look pretty on the paper and they automatically make you assume its a better option, when in the reality you’re dealing with the worst of category.
I knew something was off since i saw the price in comparison with MyDigitalSSD’s BPX model, the KingSpec was US$70 less, something had to be making cutting the cost down.
As a cost x benefit option, would you rather pick the WD Blue i talked about or the Adata SX6000 psycho_666 talked about? Or maybe something else entirely?

In general I usually advise going sata if you’re not going to be getting a mid or high tier NVMe drive, but looking at current pricing for 500~ GB drives, I really like Psycho’s SX 6000 recommendation.

For $15~ less than the WD Blue M.2, you’re getting almost double the Sequential, better 4k read write IOPS, a longer MTBF, and the same 5 year warranty on both drives. I think the SX6000 for the price is a no brainer. Although it does look like the $98 sale price on Newegg is a limited time offer, so I’d grab it before it climbs back to the $130+ it was going for pre-sale.

I hadn’t seen that price before, thanks! I think i was looking at Amazon prices at the time, but that is definitely better and it doesn’t go past my budget even after i pay Shipito to bring it over to me.
Thanks a lot for the recommendations, you dudes are great!

Glad to help, have fun

I’m scraping the pan on my Visa, hope i can get it before the sale ends!

I’ve bought a few small capacity cheapo kingspec SSDs, no failures or issues but they haven’t been used on a regular basis at any point.

Never tried their NVMe SSD’s, but I do use their PATA and SATA SSD’s. Haven’t had a problem with them, they are slow for a SSD though. Don’t really use them for the speed, use them where I don’t want a spinning platter. 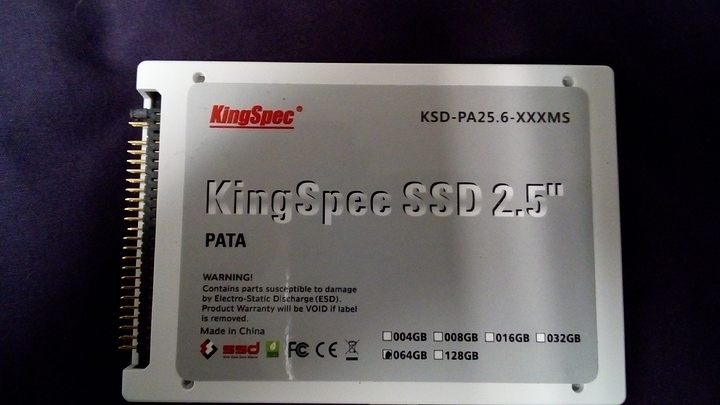 The PATA models are interesting, could be a good option for some older machines

windows 98 on an ssd. imagine how fast you could launch mw2.

Coming back to annoy you a little bit more, unfortunately i couldn’t get the Adata in time, since the day i posted and decided i would go for it Newegg was fighting with my Visa because the shipping address is not the same as the billing address, considering the billing address is my house in Brazil and the shipping address is the Shipito warehouse in Minden, NV.
But no problem regarding that, i sold some hardware and my paycheck has already hit the bank, i can finally pick the SSD i wanted, the MyDigitalSSD BPX.
I already ordered it, actually.

Haha I’m never annoyed to help someone out with good questions! What do I think of the BPX? I think it’s an underrated value for the price. MyDigitalSSD isn’t a super popular brand here in the states but they use good stuff. MLC Flash, a Phison Controller, and all the performance to match the specs. A lot of the ‘budget’ M.2 are too my liking but the BPX is an exception. The controller is solid, they use MLC flash which isn’t necessarily a requirement anymore for a good drive, but it’s nice to have.

You made a good purchase, it’ll be a fun time

Thanks a lot for the help @TheCaveman, i casually found the BPX while taking a look at the better value drives, there’s no good quality videos about these, but some reviews by trustworthy publications, so that caught my attention.