So is this a decent jumping off point for a NAS? Like the Unbuffered ECC will work just fine with that motherboard right? I know the pentiums and i3s of haswell have ECC support, figured the supermicro board would have it as well, do I just look at the chipset to figure out if the board has ECC support? 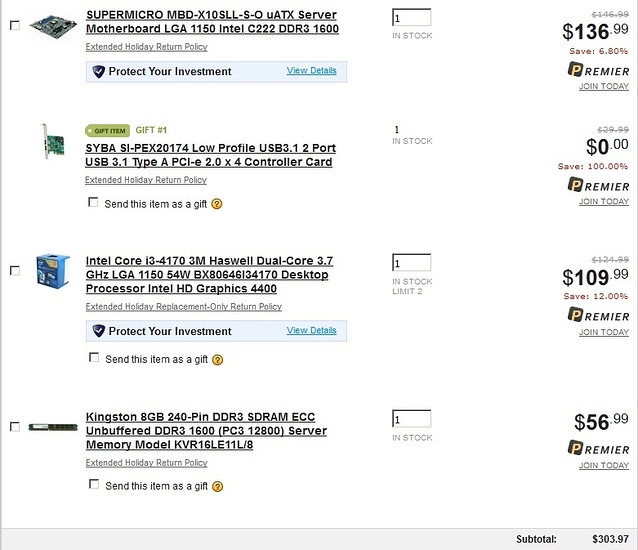 I'd find the memory support list for that board, some of them can be fussy about which brand of ecc ram they support.

I thought that was more related to registered ECC

It looks plenty fine to me.

I mean the C226 chipset with a Xeon will obviously be much more powerful, but for a home NAS I don't see the reason why your list wouldn't be adequate. I think my parents have the same processor even, and it is just fine for them on Windows with my dad plowing through Chrome tabs like it's nobody's business.

I would get a motherboard that supports more RAM. 16GB max doesn't allow for much expansion down the line.

What tasks require more than 8GB RAM on 4 threads? I'm asking because I have no idea myself, I thought the only reason to get that much RAM was for more VM's?

Well you'd want more if you wanted to run a lot of VMs, or if you had a lot of storage for the NAS, maybe if you were doing some like live encoding to change video files when you threw something to it

I would argue an FX 6300/AM3+ would be better if anyone other than yourself was accessing the files... hell you could do an 8320/decent AM3+ board for the same price and have much better performance for server tasks (i mean the 9000 series is just a server chip with a turbocharger on it)... not having ECC has never been a problem for me... Xeon is the way to go but if not... I'd do AMD.... if not for superior server performance than at least for the VM options it provides...

I think certain AM3+ boards add ECC support, same with AM1 but it seems hard to confirm if it's really working

know why? Cause bitrot is a commercial storage solution.... ECC is for like... LARGE corporations that do millions of writes a day... not consumer media NAS