I’m primarily looking for a 2-bay NAS that also has support for containers. I only know of Synology and Qnap that are big brands and available world-wide.

I tried googling around, and for Snyology I found a list of models that support the Docker package. My problem is there are so many models, and I can’t tell just by the number which are 2-bay only, and then would need to look up the price.

Didn’t have much luck with Qnap. Their Container Station seems to be universal, but probably isn’t. I found a promo video where they advertised the TS-231+ as a container capable NAS. That’s not much to go on, especially since I can’t seem to find it, only variants of it.

So could anyone recommend a NAS that can run containers? I don’t want to say Docker, cos containerization is bigger than Docker, but maybe these companies do something screwy and only allow “pre-approved” images, so let’s say I want to pull/run Docker Hub images, natively. I say natively, cos I got burnt by Synology in the past when they updated their platform which broke a lot of 3rd party packages. Don’t want to go through that again.

The problem youre going to run into is that you just dont need much cpu if you are only going for a 2 bay nas.

but for containers you need some more cpu and ram.

see if you can find a 2 bay nas with 4gb or more of ram, and look at the cpu. Post it here.

it might be that a diy option will be cheaper if you can stand having something a little bigger. It is possible to get a case like the fractal node 304 itx case on ebay for ~$50 and an older but AMPLE itx mobo w/ram for around $100. $25 350w power supply and you’re in just-add-drives territory. It is 6 bays, not 3, but no hotswap. If it were me that’s what I’d be doing. There may be some other itx cases out there even smaller but the fractal case takes a standard atx psu and has lots of airflow

It’s not actually for me, but didn’t wanna drag out the initial post with a wall of text. A friend of mine wants to run rtorrent + rutorrent, so whatever gets picked would not be pressed for every last bit of juice.

He has no Linux experience, but in my opinion that would be beneficial to start on. Cos otherwise he’s going to plug the two 12TB drives he just bought into his Windows PC, as NTFS, and run rtorrent + rutorrent via Docker Desktop.

Don’t think he would bend far enough to assemble a complete system, then install and configure something like OMV or whatever. Synology’s DSM is friendly, a whole package, everything is basically plug and play. That’s why I thought this would be the best approach.

If it needs to be a 2-bay version, then you might want to look at the DS720+. You’ll need to upgrade it with an extra 4GB, but the Celeron J4125 is probably enough for that.

Otherwise the DS920+ might give more future expandability. It has the same J4125 CPU, but already comes with 4GB standard and can be expanded to 8 total.
Will provide 2 more bays (they both support adding a DX517 for 5 extra bays) and has a bit more total RAM support. But the initial costs will be a bit higher.

How sturdy is the steel(?) drive mounting on the node 304,

Can it comfortably sit on on the side while filled with drives?

Very sturdy. Rubber grommets all the way down

I went the SuperMicro 4-bay chassis TrueNAS server route. Old 8 core Atom and 32GB RAM work well for VMs. Cost was comparable to a commercial NAS but no worries about proprietary hardware dying. Also gives me the option to upgrade to cheap SAS ex-enterprise drives.

Probably the best option if you want more than a backup target. Small businesses around here have a lot of cheap QNAPs, and by the time you get to a decent one the price goes up fast.
Cheap 2 and 4 bay models are super anemic, running on Arm Cortex A15 and 1GB or 2GB RAM at best.

On the plus side, they support the OS for a very long time, but at this point I see a lot of older models with 1GB RAM struggling to run even basic out of the box services.

I still have the first NAS I bought, QNAP TS-431P, but the next one was ironically cheaper with used Dell PowerEdge T320 and TrueNAS.

This is now a thing every time I log in to QNAP: 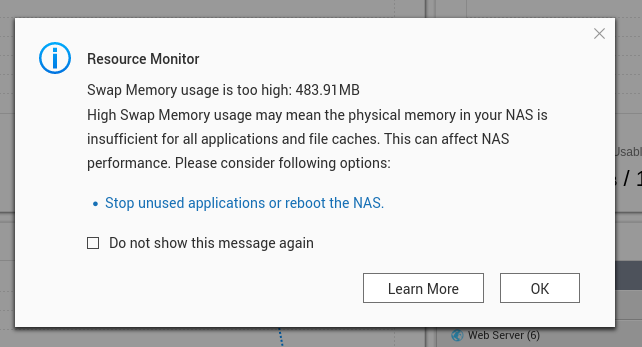 Be careful with Celeron J1900, IIRC QNAPs with those CPUs started dying because of some Intel bug QNAP never fixed. Maybe try and verify that that model is not affected if you go second hand.

VLI89 System May Experience Inability to Boot or May Cease Operation
Problem : Under certain conditions where activity is high for several years the LPC, USB (low speed and full speed) and SD Card circuitry may stop functioning in the outer years of
use.
Implication : LPC circuitry that stops functioning may cause operation to cease or inability to boot.

These are old enough to not have AES acceleration in hardware, max they can do in software while not doing much else is 75MB/s.

This makes things like disk encryption and nextcloud (because of https) and VPNs painfully slow at times.

chacha20 does better than AES on that CPU as expected but you can only use it for OpenVPN and Wireguard and https, it doesn’t work with cryptsetup and luks for block devices,

A Synology DS720+ for a 2-bay enclosure with at least a 4gb RAM upgrade is what I’d recommend for a 2-bay. Around $400 USD for just the enclosure though without RAM.

The Synology Docker solution works well and has a decent amount of tutorials for setting up containers.

It only needs to run rtorrent + rutorrent.

How big disks/how much bandwidth?

It only needs to run rtorrent + rutorrent.

I hear you, but j1900, as great as it was to have a “high performance cheap low power” atom cpu like it back in 2013-2014 era… these days it’s not really something you should seriously be considering given how much the whole “computer”/“nas bay” will cost you.

If you’re ok with low power stuff you could very well end up having a better or similar experience hooking up two USB3 wd elements disks to a raspberry pi 4; or even better an odroid n2+… which btw also doesn’t do AES in hardware despite most other armv8 64bit chips supporting it (no idea why raspberry pi folks+Broadcom gimped AES? Russian import license tax? who knows)?

Be careful with Celeron J1900

Can confirm, my first pfSense box was a J1900 and it didn’t last long. Something to do with cache memory wearing out adversely fast and/or not working around it. In fact my avatar is the picture of the kernel panic on the screen lol.