So a bit back, CentOS 8 got released. And inbetween all the release hype, i found what was basically the most interesting part for me: CentOS Stream
https://wiki.centos.org/Manuals/ReleaseNotes/CentOSStream

It seems that, with CentOS 8 there is now a rolling CentOS Release. I tried installing it back then, but the Repos weren’t up yet. Retrying it today, it seems to be running quite fine. I was able to update the system online and could install things from the software store: 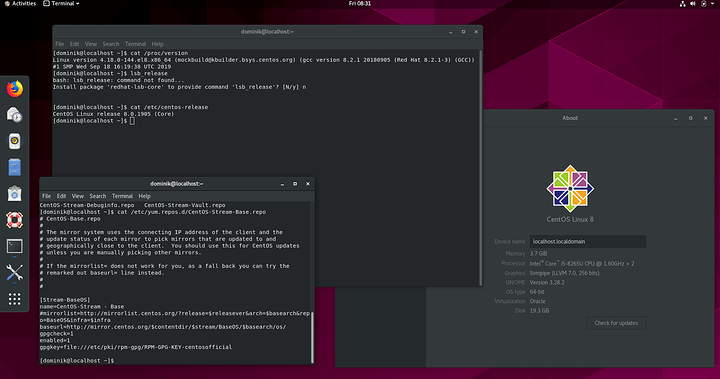 So, CentOS Stream. Since Fedora is already rolling release, what’s the plan here? From what i gather it’s a look into what’s going into the next Red Hat release. So, Fedora being the “far future” for Red Hat Enterprise and this being more like a Near Future. I guess i’m more familiar with debian so
RHEL/CentOS -> debian stable
CentOS Stream -> debian testing
Fedora -> debian unstable
Is that how it works?
What ever. I think it’s really interesting. Having something that’s more often Updated than CentOS, but is still close to what’s running on most of our Servers certainly is interesting. Fedora is a nice Workstation but often far removed from what’s happening on CentOS Servers.

Feel free to correct me if i’m wrong with my assesment of what this is. Are you interested? What are you thoughts on CentOS Stream <> Fedora?

The structure between Debian distros and RHEL distros is fundamentally different.

In Debian world, Debian is upstream of Ubuntu, but Debian uses older versions of most software. They are also pretty independent from each other despite being related.

In RHEL world, Fedora is upstream of RHEL, Fedora runs newer software, and RHEL is much more explicitly reliant on Fedora.

Debian is the outlier here. Ubuntu is upstream of many distros, and they are all behind Ubuntu software-wise.

Compared to Debian world, the relationship between Debian, Ubuntu and the many downstream distros of both are much more detached and independent. For instance, if Mint, Elementary and Pop disappeared tomorrow, it would have virtually no effect of Canonical’s day to day, but if any part of the RHEL stream disappeared, it would have an impact on the whole ecosystem.

Additionally, Fedora (and I believe CentOS Stream) are not rolling. Only Fedora Rawhide is rolling. Upgrading between major versions of Fedora is not a rolling process. Likewise, when RHEL 9 comes out, I don’t think a simple dnf update -y is going to bring CentOS Stream up to version 9 (could be wrong though…).

and I believe CentOS Stream) are not rolling.

Centos Stream is supposed to be a rolling release, at least according to the page for it on the centos wiki.

I think it is just rolling in that it won’t have minor releases. For example, a major feature enhancement could be included in CentOS Stream now but in RHEL it would have to wait for 8.2.

I’m not aware of any official word on what happens to CentOS Stream around the RHEL 9 release.

I think it is just rolling in that it won’t have minor releases. For example, a major feature enhancement could be included in CentOS Stream now but in RHEL it would have to wait for 8.2.

Yeah, this is my understanding as well.

I am pretty tempted to switch my desktop to CentOS Stream. @domsch1988 are you using it as your primary desktop?

are you using it as your primary desktop?

Not yet. I installed it in a VM to see if the repos are up and such. I’ll give it a go on a spare 250G SSD i have around. Though i’m on Ryzen 3000 so, depending on Kernel Version i might not have luck with that. I’ll see. The latest Fedora ISO’s won’t boot atm.