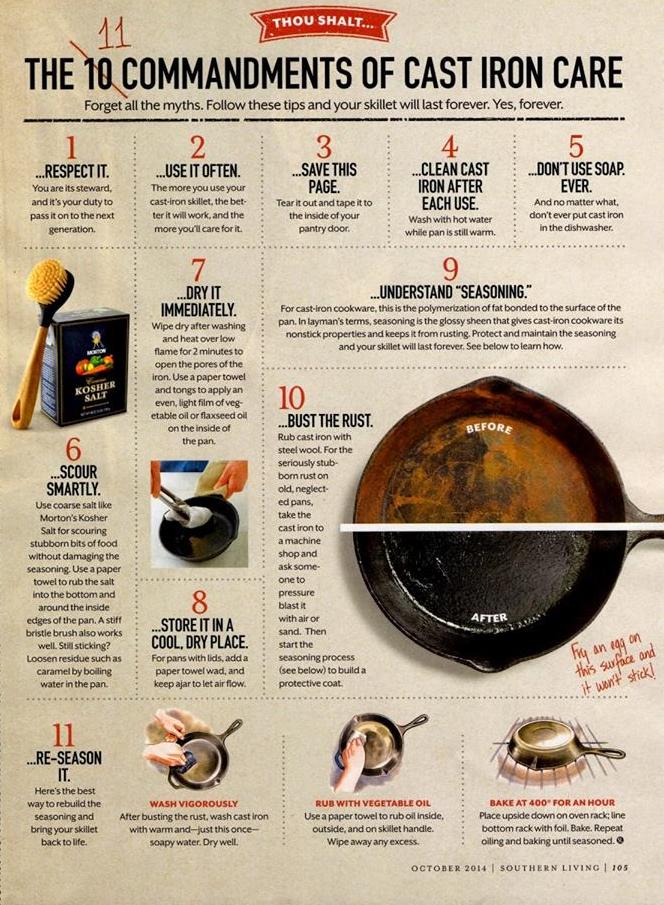 im gona season the fecal matter out of my cast iron stuff.

Yeah seasoning is a must. I use coconut oil and clean after each use with water (no soap) like the page states. Love cast iron skillets.

You can wash cast iron with soap; that is just a kernel of wisdom from colonial times, when soap was caustic stuff. Modern soap is far gentler.

Plenty of kitchens that use cast iron put them through the dishwashers without issue.

Interesting poster, however taking a rusty pan to a machine shop seems a bit extreme... If you let it sit in some vinegar for a day you can just rub off any rust easily. afterwards clean with water and season and you're done.

We have a stove that is not level. So oil and grease fall to one side of the pan. So one side and a lot of the middle of the pan never stays oily and the other side is just caked with crap.

I clean it every time, but god damn is it a pain.

When I use it at a friends house, it works beautifully though.

Best way to do that is never wash it, basically. Scrape the fat out and scrub with steel wool.

The Truth About Cast Iron Pans: 7 Myths That Need T...

There's a mysterious, myth-packed lore when it comes to cast iron pans. On the one hand there's the folks who claim you've got to treat your cast iron cookware like a delicate little flower. On the other, there's the macho types who chime in with thei...

Modern soap doesn't contain lye, which was probably the reason for not washing them in the old days. Also resurrecting this topic.

I've started washing mine with water after each use, it's just sanitary. But I wouldn't hesitate to use a drop of soap if I had to.

i ran out of coarse sea salt so i got some icecream salt, and found that it works alot better actually. the larger grains last longer as they are scrapping up the bits, and i wash it with water too, how else you gona rinse anything off? but i dont think you have to worry so much bout it being sanitary cause doubt much survives when you heat the pan.

Unless your pan is like super dirty, then you are not being more or less sanitary by washing it.

Any pan should get hot enough to where it kills what ever bacteria is on it.

Curious if you've tried shimming the whole thing up to level it? I had the same issue in previous homes, and wish now that I would have tried that when I could have.