Can not get my RX 570 fans to stop spinning

This is driving me slightly crazy and I’ve spent way too much time googling and trying different things. Whatever I do I cannot get the fans of my AsRock RX 570 8GB to stop spinning.

As described here: https://wiki.archlinux.org/index.php/Fan_speed_control#AMDGPU_sysfs_fan_control I have tried setting the value to 0 manually. I have tried both amdgpu-fan and amdgpu-fancontrol.

It seems like the card considers 1200RPM as the lowest it could possibly go for some reason. Values above 0 increase the RPM, so 53 is ~1700RPM and so on, as reported by lm_sensors (no idea if these values are exactly correct, but it doesn’t really matter.)

The hardest thing this card is ever gonna do is play 1080p video so it seems unnecessary keep those fans constantly spinning and making noise.

Everyone says AMD cards run well on linux but in this case I’m kind of disappointed. My 1660Ti that I use for my Windows VM just sits there at 0 RPM when it’s not in use, and it obviously doesn’t even have drivers installed.

I guess I should probably just give up at this point, at 1200RPM it’s pretty quiet anyway.

I have had broken fan controllers on a graphics card before. Have you tried the 570 in a different environment to test the hardware?

I’ll try it later today in native windows and see, thanks for the suggestion

unplug it and let thermal throttling take its course

Oookay so, I got some interesting results.

AMD’s own software would only let me set the fan speed to 20%. However, with MSI Afterburner I was able to set it to 0, as seen here. 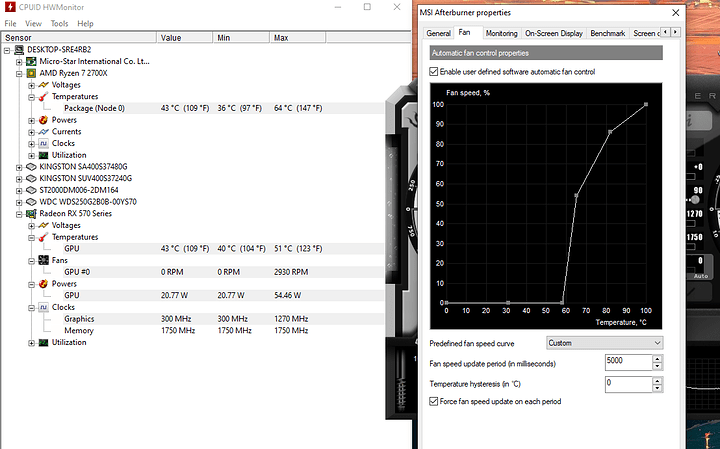 The fans were still spinning though. What does that mean? Is it a defect?

As for unplugging the fans entirely, it gets pretty toasty in the case when I’m playing something demanding in the VM, and if I also have a stream open in the host then I would like them to spin and do their job.

I have a RX 570 (XFX) as well. My fans stop spinning entirely, when there is little load on the GPU.

When you set the fans to 20%, are they spinning quietly (slowly)? If there is no change in the fan speed during normal operation, contacting the manufacturer would be a good idea.

Don’t be afraid to talk to them, it is their job to take care of you. Be nice. =)