can i fit noctua nh d15 with my 2 sticks of hyperx beast and not hitting my r4 sidepanel and i want use fan on to side panel. im lookin to get good cooler for my i7 4790k can you guys recoment some thing water/air cooler about 100-150 dollars

About the CPU cooler, depends what you want out of it.
Pick the two most important to you:

thank you but i cannot find my rams height anywhere 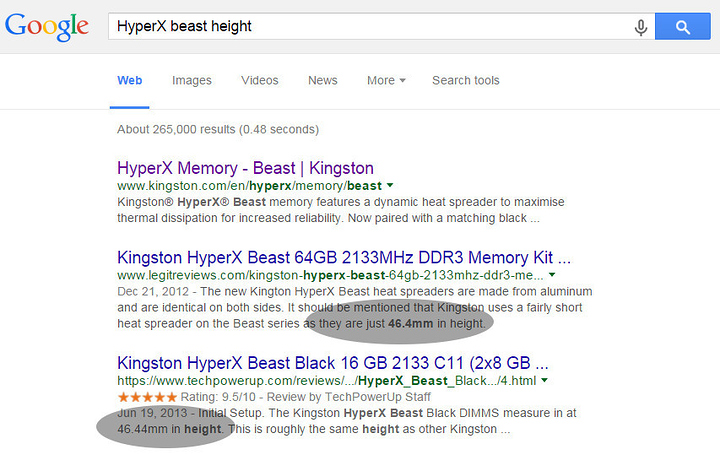 those beasts are not going to fit, if you have a board which has the memory slots a bit close to the socket.

If you'd read the fourth google result from the search provided about the NH-D15 you'd know that you can remove the front fan from the cooler/mount it further upwards to increase the max RAM clearance to 64mm.

The case I'll be getting is the Fractal Design Define R5 and I'm also getting G Skill Ripjaws X and A noctua Nh d15. Would I have any issues/Closing the side panel. I've already ordered the parts as

The Cryorig R1 universal. It's usually pretty hard to find though.
Other than that you could go for the NH-D15 anyway and then mount the front fan on the back of the cooler instead.
Might want to take a look at the NH-D14 too, I think that's supposedly got better RAM clearance? R1 universal beats it though, I think.

i get r1 and thank you for helping me out

i would personaly go with an AIO in this case.
Something like a H100i, or Coolermaster nepton 240m
Will be way easier to work with in your situation i guess.