Building inside a Fractal Torrent Questions

Hi first time building a PC and so I have some questions about cable management, as well as CPU and chassis fans.

As a result I would like help or clarification on how the fanhub should be used if at all.

Below are the parts as well as what the airflow I think will be happening with the build. Thank you for help. 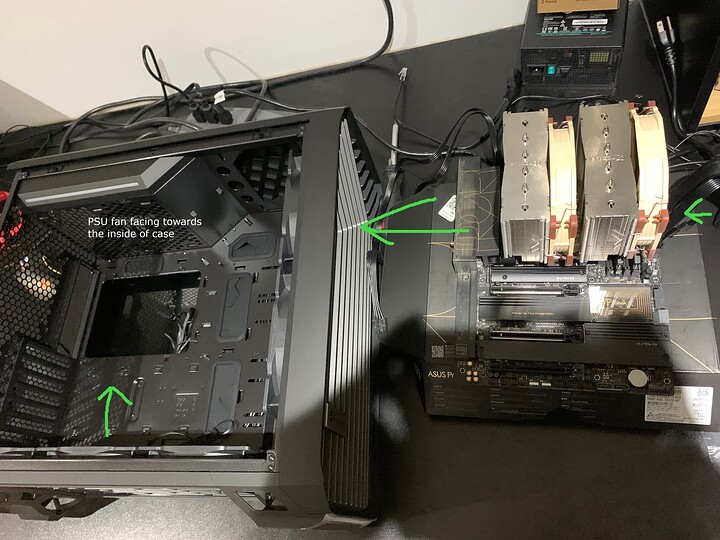 GPU: NVIDIA GTX 1070(will be upgraded or replaced in the future)

Though I need to use both the noise dampers and the Y splitter to get the noctua fans to make it all the way down to the fan hub.

Don’t use the Low Noise Adapter, as it has an inline resistor that mess with the PWM signal (reducing the fan speed unnecessarily). You can use the Fan Extension cable and the Y Adapter if needed.

If you’re not using any fans in the case, then it makes sense to just use the motherboard CPU_FAN header (and use the Y-splitter as necessary).

The benefit of Fractal’s fan hub is that it can control all fans attached to it, including case fans, based on the single CPU_FAN PWM control from the motherboard. So when the CPU fan needs to spin faster, the case fans that are attached to the fan hub are also told to spin faster, which allows cool air to enter the case (and exit) which helps increase airflow inside the case.

Some people like this, some don’t (due to the noise ramp-up of all the case fans spinning up). I prefer it, as it’s a single place to adjust the fan curves.

But if you don’t like this, you can simply connect the cooler fan directly to CPU_FAN header on motherboard, and then connect the case fans to CHASSIS_FAN (or SYS_FAN) headers on the motherboard. Remember to go to the UEFI and adjust each of the fan header’s controls manually, to DC or PWM, depending on the case fans being used, and the adjust the curve on each one.

As an aside, fortunately, most modern motherboards can internally read the PWM signal on the CPU_FAN header and distribute it to the case fan headers if you leave the case fan headers at the “auto” setting (as long as DC or PWM is selected properly). So the motherboard itself acts like the fan hub. But again, I prefer using Fractal’s fan hub as it’s hardware, and in case the UEFI resets, I don’t need to worry about the fan settings.

[Edit: apparently I took too long replying, and the forum didn’t show me Kish’s post until almost 2 hours later. The following is redundant since we’re basically saying the same things.]

Your airflow is correct. I’ll go over how the pieces interact in your particular setup, and then give a configuration to start with.

The motherboard has all the fan control logic; BIOS uses various temperature sensors to decide what speed to send to each fan header. All of your fans are PWM, so each header has 3 parts:

Because your motherboard is capable of controlling the fan speed based on temperature and settings, you don’t want to use the noise dampening adapters. They limit the fan’s max speed, and are intended for situations where there’s no adjustable controller and they would just run faster than desired.

The Y-splitter makes two fans appear as one: it copies the power and speed control to both of the Y ends, but only reports the RPM back from one of them. This basic split works well for a couple fans, but would draw too much power from a single motherboard header for many fans.

The fan hub in the Torrent basically works the same way, except it draws power from the much more capable SATA connector. It takes the RPM report from the fan connected to FAN1 and sends it to the motherboard through GND FG PWM MB.

There are basically two reasons to use the hub or splitters:

Your motherboard actually has enough headers: you’d connect the two Noctuas to CPU_FAN and CPU_OPT, and the rest to CHA_FAN1 - CHA_FAN5. So you could connect them that way, the defaults should work fine out of the box, and you’d be able to monitor and tune them individually in BIOS or with software if you wanted.

For airflow purposes, I view the fans as being in groups:

The last two groups serve the same purpose, so it’s ok if they’re in sync. With that in mind, another configuration would be:

This would only allow two points of future customization, but the fans would always be running together in a way that makes sense.

Either is fine, and a bunch of other configurations would also be fine. As long as they all run and move air in the right directions, the rest ends up being personal preference. There’s not too much that can go very wrong in this area.

Okay, thank you from what you and Kish have talked about I think I’ll take the three bottom fans to the hub, the two front fans individually connected and the two CPU fans on the CPU and CPU OPT header. Since the 180 mm seem to be the loudest, having them be slower than the bottom fans make sense.