So, I use to have two APC SMT3000RM2U that I had modified with an external 100AH 48VDC SLA battery but after years of service the charge controllers in them died. So I started looking around for a set of replacements and was looking at the APC SRT3000RMXLA-NC on eBay, the price was a bit high for my taste, but not out of the question, the bigger problem being that it used a 96VDC battery pack and the extended runtime battery packs were expensive and you did not get a lot of run time for the cost.

So I started looking around for alternatives, so down the internet rabbit hole I went, I looked at things like the AIMS Power PICOGLF120W48V240VS, but that was kinda too heavy for me to mount to the wall by myself. I looked at some of the Victron Energy stuff, neat ecosystem, but a bit rich for what I was looking for. Then I found two candidates for what I wanted, the MPP Solar PIP-LV-MK SERIES – ZERO TRANSFER TIME inverters and the Growatt 3kW Stackable Off-Grid Inverter | SPF 3000TL LVM-ES.

Now I had narrowed down my inverter options I started looking at batteries, everything from Battle Born Batteries, SOK, Big Battery, and EG4. It seems like there is a pretty decent community around the different battery companies, but I ultimately went with the EG4-LL Lithium Battery | 48V 100AH battery for its BMS and built-in precharge resistor. The warranty was nice also, the shipping on it sucked though. (read expensive)

So going with the EG4-LL kinda pushed me to the Growatt SPF 3000TL LVM-ES inverter for its ability to talk natively to the BMS on the battery vs the MPP Solar inverter that was a bit harder to find an online community around, but it was a good backup plan to have to incase the transfer time on the Growatt was not fast enough for my equipment. For some context, the Growatt’s transfer time is ~10 (average)-20 (max)ms compared to the 4(average)-8(max)ms that an APC UPS is. I also did a bit of research and found that most of my gear has a hold-up time of ~17ms, so I thought I would be pretty safe, but there is no telling how something will perform in the real world vs on paper.

So I ordered everything through Signature Solar and then played the waiting game, the inverters came in 2-3 days via FedEx and the battery came about a month later (it was a pre-order, they sell out fast). While I was waiting on the battery I started a gsheet of all the different supplies and what not I would need. ( Whole Home UPS - Google Sheets ) I already had some knukonceptz Power Cable from my car audio days, so that was a nice little savings.

Once I get everything in, I started the project on the first free weekend I had, I am hella outta shape from covid times and never leaving the house so it took me longer than I want to admit to get it all done, but it is done and working as intended and now I have ~2.65 hours of battery backup for the rack and room to grow. The inverters are setup in a split-phase arrangement so I can power 120VAC and 240VAC stuff, might put the HVAC on this at a later date or I was also looking at a 48VDC mini-split I could power directly off the battery pack, you can put like 16? of these batteries in parallel with the BMS comms and they will work as one cohesive unit.

I am open to any and all questions, here are some ugly pictures. 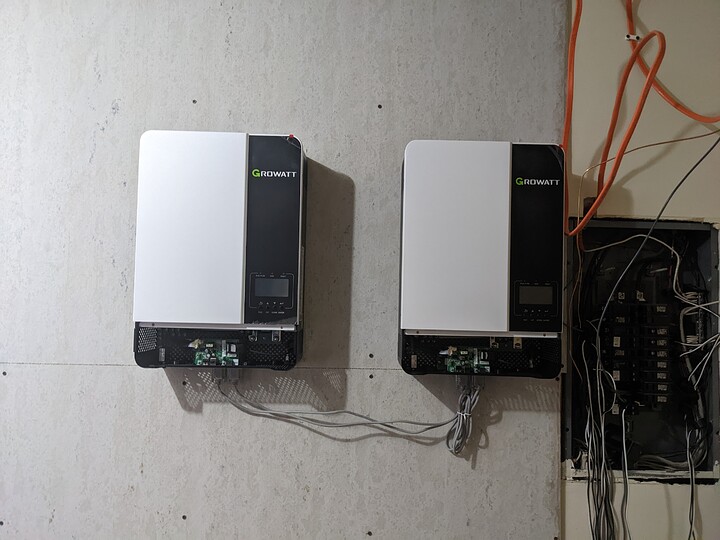 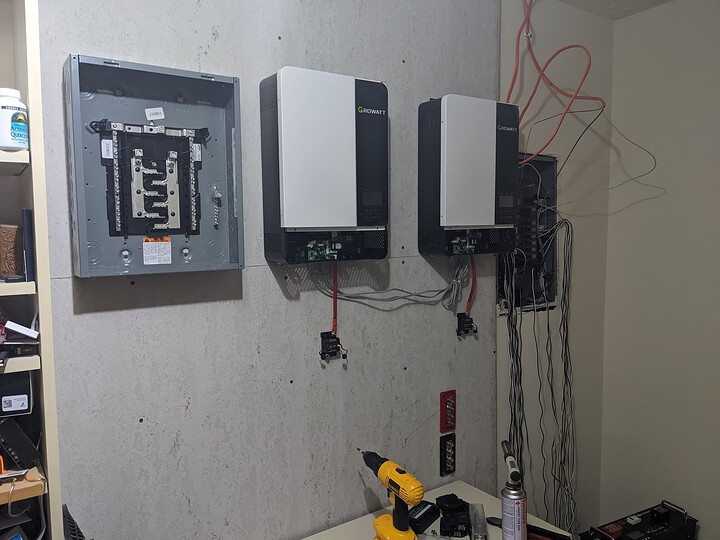 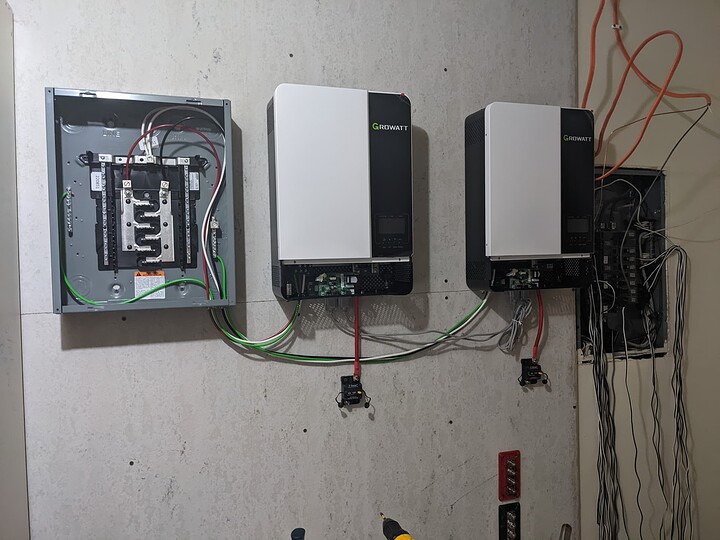 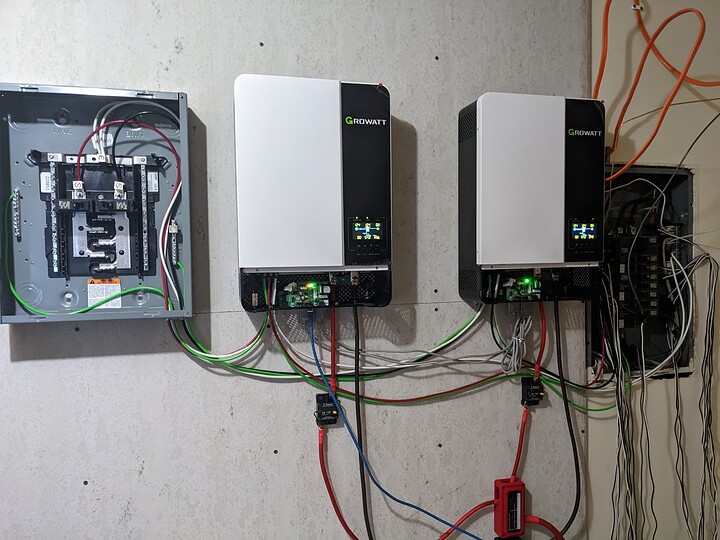 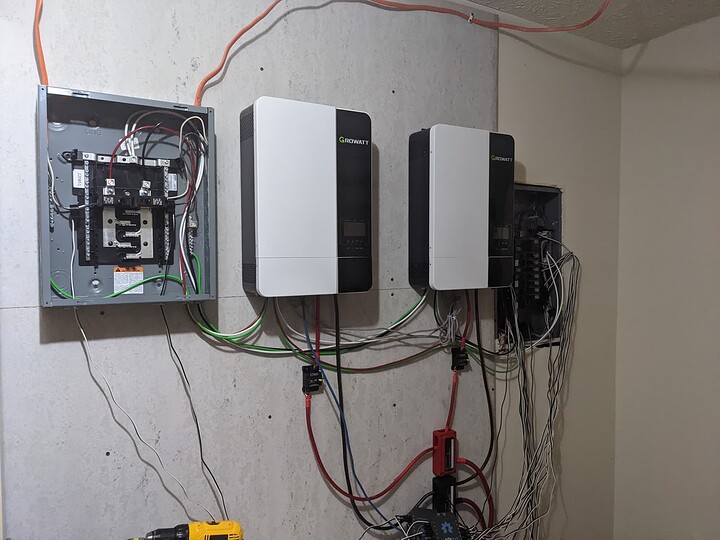 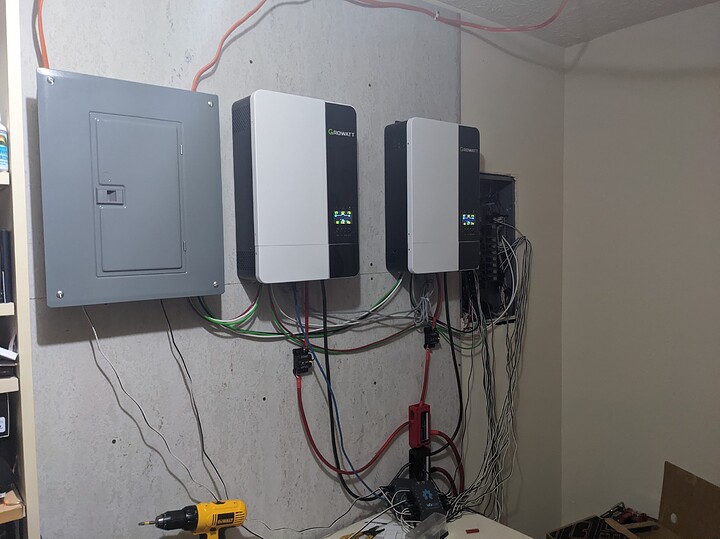 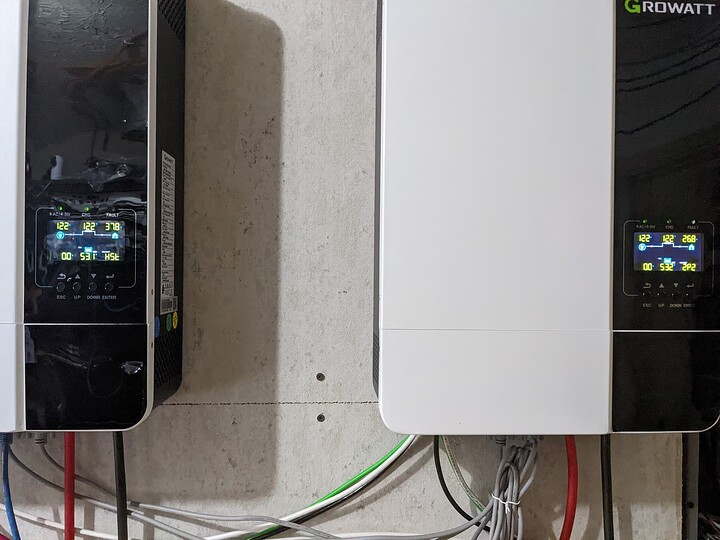 @wendell this may be of interest to you from your last UPS video.

Very nice! … have you tried to cut power and see what happens?
Every datasheet I see for these inverters have a warning saying they are not a true UPS (e.g. it may take them too much to switch from AC to battery inverter when AC fails) …
I have been looking into getting a similar setup, but based in Italy, so 220 AC single phase and much more batteries to power the whole house but the EG4 and SOK batteries here are a no-go and the only option is Pylontech, of which availability is very scarce …
I also have 6KW worth of solar panels to charge the batteries for free about 7 months per year …

@MadMatt yeah, I have cut the power several times under load, seems fine, I am waiting on some real-world power disruptions to see what happens.

If you are worried about it, check out the MPP Solar Inc » PIP-MK Series might be more your speed.

If you are worried about it, check out the MPP Solar Inc » PIP-MK Series might be more your speed.

I am not worried

the plan is to use the Inverter UPS circuit to feed a proper UPS (I dont’t have a rack yet, but I do have [email protected] worth of various electronics) and some other appliances for which the time switch will be driven by a contactor anyway.
The plan is to have the UPS line of the inverter to be connected to some of the house loads normally connected to grid, with a contactor to operate the switch in case grid goes down.
When grid is up I am going to be using the ability of the inverter to monitor power draw after the solar panels and eventually feed ac to the whole house when needed…
Now I only need 10K eur wort of batteries and 2K eur worth of electrician and paperwork, so that I can then claim a 50% tax deduction on it …
Probelm here in Italy is that between the scarcity of product and all the tax deduction because ov covid restoration plans I can’t find a freaking contractor that can do it in the next 1-2 years , so they say
I am completely fed up of this bllshit, but prices here have been inflated because of tax deductions, so a 4.8KW Pylontech 5000 can be preorderd for 1700EUR+VAt (23%) that means 2200USD plus shipping, and I would like to have at least four of them … from march to september my PV array produces 30-40KWh/day worth of energy, and the house consumption is 10-20 during the day, depending on wether we charge our PHEV renault …

@MadMatt ah, yeah, glad I can do my own electrical work, but I also have a buddy who is a licenced elechiken if I had to permit something.

Sorry you have to pay vat.

UPS after the inverter is probably a pretty safe way to go if you are worried about the transfer time, it should be a better sign wave than the grid in most cases so it should not piss off the UPS.

I use ~90-100KWh/day here, so the most I would probably do is ~30KW of batteries as I don’t have a real basement or anything.

Sorry you have to pay vat.

also, that is the best price ordering from an unknown place in the Netherlands … in Italy I have been trying to find a supplier but nada

I would be perfectly able to do the electrician work, but because of the contactor and the on grid/off grid it needs to be done by someone with an official license, and in order to do the tax deduction a contractor needs to buy the goods and re-invoice (with a surplus) … it’s the proverbial crock of s**t if you ask me

That sounds… crazy… unless you have a huge solar PV installation. It would almost certainly be cheaper to run such heavy loads directly from a generator rather than battery.

Have you figured out how much each KWH of power from your batteries costs you, factoring in the number of charge/discharge cycles and the purchase price? It is not going to be cheap.

@rcxb No PV, HOA won’t let me, the same thing with a Genset.

~$340/KWh for the battery, it’s warrantied for 7000 cycles 80% DoD and I am not cycling it every day, maybe a few times a year depending on power. I don’t really care too much about the cost, it’s cheaper and more flexible than an APC UPS, In theory, I could run the whole house off of the setup as it stands right now, though I would probably need a 2ed battery to feed the full 62.5A per inverter at full load, the BMS is only good for 100A each. 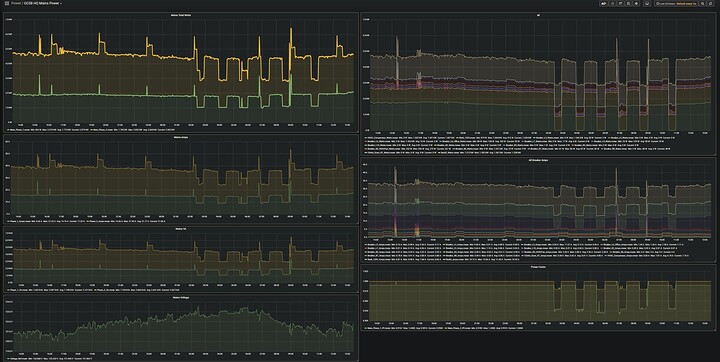