I build my own computers, but really I just know enough to get me in trouble. I have 6 kids between the ages of 6-17 years old and they all love to play PC games with me. I’ve built most of their rigs. I really hate the physical footprint of 7 different gaming rigs (Even with ThermalTake stacking cases) and I’m wondering with the advent of the 3990x if it is now possible to consider a 7 gamers/1 system setup like Linus has done a couple of times in the past with server chips (Sorry, @wendell maybe you’ve done it too, I just haven’t seen your video if you have). I know there would be a price premium over what it would cost to build 7 separate gaming rigs, but space is the higher consideration for me at this point. I would probably use 5700 GPU’s. The most graphically intense game we play is probably Ark and we mostly game at 1080p. I have extended family who also game with us so I’d like the rig to be able to host an Ark server cluster with all the maps available 24/7 as well as support 7 simultaneous gamers. Thoughts or ideas about using a 3990x for such a pursuit? I know one potential concern will be that all 64 cores won’t be able to run simultaneously north of 4.0Ghz. That doesn’t bother me, we aren’t competitive eSports team members. We have Freesync monitors and as long as we are around 40-50 fps, we’ll have an enjoyable time. Thanks in advance for any insight you have on this topic.

Edit: Ha, I realized right after posting this that the most immediate concern is whether anyone actually makes a MB for the Threadripper platform that will have 7 PCIe slots for the GPU’s. Hmmm…

There are splitter cables for that…
You have other issues, like actual case, that will support and more importantly cool 7GPUs properly…
Maybe there is a way to split 1GPU to support 2 users, and then it’s all fine, since most TRX40 boards have 4 or 5 PCIe slots…

I wanna see where It goes

Do you intend to hit it full-on all 7 at once?

How about arranging seven PCs on a rack mount? Would be a helluva project also

Do you intend to hit it full-on all 7 at once?

7 at once would definitely happen regularly, but 3-5 at a time would be more common.

Maybe there is a way to split 1GPU to support 2 users, and then it’s all fine, since most TRX40 boards have 4 or 5 PCIe slots…

Yes, that would be ideal but I’ve only heard of the very expensive cards like the nVidia Quadro cards being able to divide resources among users.

Thanks for the replies and interest in the subject.

The case is going to be your hurdle, and perhaps iommu groups (lessened with acs patch}

Any of the TR 3000 are enough horsepower, games aren’t large on threads.

Using bifurcation you have 6 x8 slots for GPUs, so your 7th GPU will need to go in either a PCH slot, or use an nvme to slot riser and settle for x4 bandwidth.

Are you interested ir have you settled for the tr?

The case is going to be your hurdle

Well there is always this garbage… 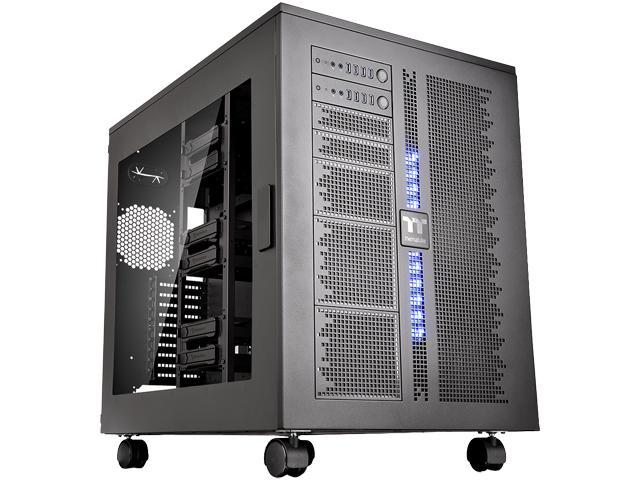 I almost feel like it would be easier to setup a rack with 7 different rack mounted gaming computers, but that has it’s own concerns. Would probably still be easier than trying to split up a single platform, not as interesting though.

Are you interested ir have you settled for the tr?

I haven’t settled on anything. I started with the TR because I didn’t want to bottleneck on threads. I would plan on using this system for at least 5 years into the future and wanted to have enough CPU for any unforeseen future needs. Gaming would be the immediate use case, but several of my kids have natural artistic talent and I’m hoping to steer them potentially into some CAD, video production, or even game dev experiences. It’s all just a lot of conceptual thinking right now to see if a potential solution materializes. AMD seems so far ahead of the game with putting CPU resources in reach of desktop users that it seems it will be a year or two before software catches up to making good use of it all for the ideas that I have. I guess getting the GPU makers to support allocated resources for gaming is the best way to resolve the major challenges to this build, but also the least likely thing to happen.

The big thing to keep in mind is PUBG and Battleye won’t work in this setup, and EAC can BSOD the VM if you do USB/evdev Passthrough.

the hardware has all your need. but software to support spliting PCI4.0 16x slots to 4x PCI3.0 x8 slots etc may be lacking.
With drivers it for sure could be done.

Then that Linus video on NVME storage where the real world limit is so far below the specs.

I guess this new hardware just coming out and us dreaming big is always a thing.

PUBG and Battleye won’t work in this setup

We don’t play PUBG and it would be a private Ark server that doesn’t need Battleye. Terraria and Factorio servers would exist. In the unlikely event that Star Citizen creates a private server option, like CIG originally promised, that would be something to look into.

I’ve thought about this a lot.
The best I could come up with is a dual Threadripper system. The most pcie x16 slots you can get on a TR system is 4. And for Intel socket 3647 is 7 (but they have only single slot spacing available).
So…a dual TR system makes sense.

You could build the pc into the area the systems will be used in… like in a central table. You can do anything you want with a custom case.

Have you considered using a rack solution for multiple systems? While I am intrigued to see another 7 gamers 1 CPU build, I am wondering if maintaining separation of the machines will prove easier to use and maintain. Other videos of Linus’ show his home setup where he rackmounts his personal systems and then utilizes either thunderbolt or USB-C to pass everything through a wall to a dock which runs everything. Just an idea, I am interested either way. Good Luck

What are you planning on spending on this? Because if that’s not really a consideration, then there are also (very few) enterprise GPUs to pick from, the most recent AMD one being the v340 -> https://www.amd.com/en/press-releases/2018-08-26-new-amd-radeon-pro-v340-graphics-card-delivers-accelerated-performance

Alternatively, there of course is looking glass.

I wouldn’t adive on any kind of consumer GPU for a project like that because that would lead you to headache land from the beginning. Just like many suggested enterprise GPUs are designed for those kind of workloads AND could even serve more than one gaming session, allowing you to use 4/5 cards for 7 users.

But, in general, I wouldn’t go that route to be honest because it’s very very expensive from the get go and will require a lot of maintenance. Maybe making a custom case that can house 7 ITX systems, splitters to run enough PSUs and not one for each system and that’s it.
Also a server-style build would require more network cards, USB cards, audio devices, etc. And if something in the system might ever malfunction everyone can’t play games.

What game do you play that requires 8 cores per person?