Many people on the forum seem to be concerned with the direction that Mozilla has chosen for Firefox. Brave, however, seems to be doing a lot of really interesting and innovative things. They’ve been baking in features like built-in ad blocking, tor private tabs, a privacy focused crypto ad service, and even including IPFS by default. Today they’ve announced a new search engine called Tailcat. 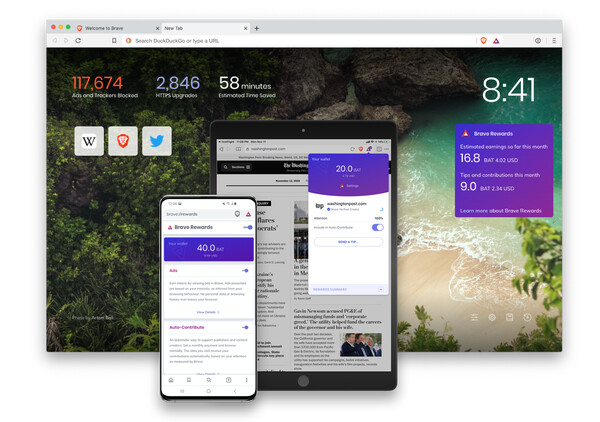 Brave is launching its own search engine with the help of ex-Cliqz devs and...

Brave, the privacy-focused browser co-founded by ex-Mozilla CEO Brendan Eich, is getting ready to launch an own-brand search engine for desktop and mobile. Today it’s announced the acquisition of an open source search engine developed by the team...

Tailcat will be an independent privacy focused search engine available to users in early spring or summer of this year. I say independent because it won’t rely on Google or Bing for curating it’s results as many alternative search engines like DuckDuckGo do.

Obviously we will need to wait and see how Tailcat’s search results are, but Brave’s CEO seems to think they’ve been quite promising. If it’s good, and with Brave doing all of these things, would it be enough for anyone to make the switch? If you’re a Brave user what are your thoughts on this? I look forward to discussing this with you all.

About search I hope it becomes a strong alternative to Google. We desperately need good completion in search engine market.

I think what we need is an easy to use decentralized search engine though. Something like Yaci, but so it is easy to use and install. Maybe P2P is not an answer as most people don’t have the desire to install a node on their own PCs.

Perhaps a federated search engine is the answer. If duckduckgo and all other smaller search engines could pool together somehow to act as gateways.

Neat! I am all for more search engines.

I recently started using Brave and I am personally not a fan of ANOTHER chromium based browser but if i have to use one it would be Brave.

A decentralized search engine becoming mainstream would be a huge win, and it could definitely be a reality in the future. In the mean time privacy oriented federated search engines, especially those not reliant on Bing or Google are a great start. Also, I posted that one into the News Dump per your suggestion.

Brave being based on Chromium is a hard pill to swallow for sure. On one hand it’s not that Chromium is bad, just that too many browsers based on one thing creates little competition on that front. Our reliance on Chromium and Webkit/Blink is certainly problematic. That’s one thing I like about Servo which is now under the Linux Foundation umbrella.

Brave being based on Chromium is a hard pill to swallow for sure.

Nothing wrong with chromium as a base. It’s solid tech.

just that too many browsers based on one thing creates little competition on that front.

Alternatively, we don’t have the fragmentation issue. Too many alternatives reduce the effectiveness the development effort.

I totally understand and have considered the points you made. I agree the Chromium is a really solid base, however, I don’t want it to be our only option. There’s a balance between choice/competition and fragmentation. It could also be a security concern having so many browsers based on the same foundational code base no?

Not to get too far off topic, but I don’t see it as particularly a bad thing. I mean as a comparison, how many games use Unreal Engine or Unity, and that has not stopped them innovating at all.

Just because they use the same base rendering engine for a browser does not stop developers adding whatever they want there after, I mean even if they were all JUST chrome, the ability to add plugins could mean almost every user can have a unique browser configuration.

The only reason they are all so samey is they they have a minimum level of functionality to reach and that has been set pretty high now so they all take a decent amount of time getting to the point where they all look and feel almost the same, after that they can start to add new bits, just like brave did. It was fairly plain with just an idea at the start and people were skeptical, now it is not uncommon to hear the name when talking about web browsers.

It could also be a security concern having so many browsers based on the same foundational code base no?

Yes, but I think weighing that against the concern of having everything using the same encryption libraries is just as much of a concern but for the most part, we’re all okay with that.

Anyways, I think we’re getting a bit into the weeds, sorry for dragging us off topic.

I am excited about it. Been using DuckDuckGo which is ok but not ideal.

In general been happy with Brave since they fixed their sync function. Hope the company continues on the current path.

Yeah DuckDuckGo just isn’t as convient as Google. There are things like doing “Cast of Tenent” or “what is imperative programming” (gives you what people have asked & answers without going to actual website) that google does better…Small but it does make a diff & I find myself using the bang operator (!g) at the end of my DuckDuckGo searches far to often.

Search results not being manipulated by a socially driven corporate opinion is likely always going to be better than what Google can offer, it will just take time.

I personally use both Vivaldi and Brave, and have BitTube AirTime in Vivaldi so I am double dipping in the crypto browsing earnings. I have tried almost every offering out there now for Windows and Linux, and I wouldn’t touch anything other than one of these two.

It’ll be interesting how Brave will try to innovate within the search engine market, there are plenty of popular search engines which either kept running at a shrinking user base only to expand into other services to stay afloat or they moved away from in-house work due to Bing/Google deals. Weakness of DuckDuckGo is the privacy factor makes some of the usual “Google” key searching filters break.

From a web developer point of view, even if you build a search engine there will be too much “SEO spam” trying to skew results. You could throw an AI to filter out SEO spam and still reach the limits of trying to avoid search engine manipulation. There are use-cases of building your own search engine for personal/work sites to minimize relying upon any API, many years ago I was approached by someone who wanted to try that and even after deploying a captcha for a certain amount of “excessive” searches there were moments of manipulation.

A decentralized search engine becoming mainstream would be a huge win, and it could definitely be a reality in the future. In the mean time privacy oriented federated search engines, especially those not reliant on Bing or Google are a great start.

I’m not so sure decentralized search engine would work well if there is censorship/ISP level traffic shaping. Crafting a search engine to work with minimal latency is a weakness once you try a decentralized functionality as every peer adds an unnecessary hop, you run the issue of regional data skews and also potential of people/groups/companies trying to poison search results like between 2000-2008.

DuckDuckGo is a pretty good search engine with unique features like bangs. As someone who uses it as their primary search engine I quite enjoy it, but it does have it’s short falls. Those you mentioned are great examples. I’ve also found very specific searches aren’t as good as they are in say Google. They rely on yelp for business hours which is hit or miss for smaller/local restaurants too.

Why would people trust Brave, browser or search, at all?

They have made some questionable decisions in the past. Particularly, they get a lot a criticism for the automatic insertion of affiliate referral codes. This has since been disabled. Additionally, they had accusations of not paying content creators there BAT. I believe this was resolved as well. These decisions definitely don’t reflect the actions of a company to support, however, they corrected these things rather quickly. The question is do these decisions make Brave a worse browser than the alternatives. Mozilla has been making some pretty bad decisions themselves lately, and I don’t think these things even remotely compare to the abominations that are Google and Microsoft.

they corrected these things rather quickly

This reflects on the size of the organizations, not the level of trustability of their purposes/intents/SOPs.

There are exactly zero perfect browsers or search engines today, and so they must be judged within this constraint. Mozilla however, is the only one operating with a non-profit organization.

Well said. I wouldn’t really use their search engine.

a couple weeks ago i was looking for information about a man who died 150+ years ago and was the father in law of one of the ames’s of ames manufacturing co. google found a 100+ year old book that was a pdf on some scholarly education site about Connecticut familys that had a few lines about their family in it.

please correct me if im wrong but catching up to google is going to be a remarkable feat probably as difficult as a moon landing if not more so these days and the word google is synonymous with search engine the noun and verb. so many big names have failed and their is so much advertising money in it. a actual competitor feels less real then the new age battery tech, flying cars, or uploading yourself to the matrix.

Revived necro for some reason, but i’ll give my two cents.
I do not trust Brave at all, i wouldn’t use their browser nor their search engine.

Not only that, Google has set foot firmly in many countries that don’t speak english, my native language is portuguese and Google is by far the best search engine to find results in portuguese, Duck and Bing don’t come even close.
If any search engine has any hopes of catching up to Google, they have to invest heavily in optimizing results that are not in english.