Boredom, its a helluva drug

Bios modded and old Asrock extrem3 r2 to allow NVME boot. Ive got a Y2K compliant HP case that i am going to stick this in with a FX8320 that i have in a drawer somewhere. Not truly retro, but retro inspired, borebom build. Undecided on a gpu yet, i have a p1000 that is similar ro a gtx1050. Here is the board with an NVME adapter booting windows 10. 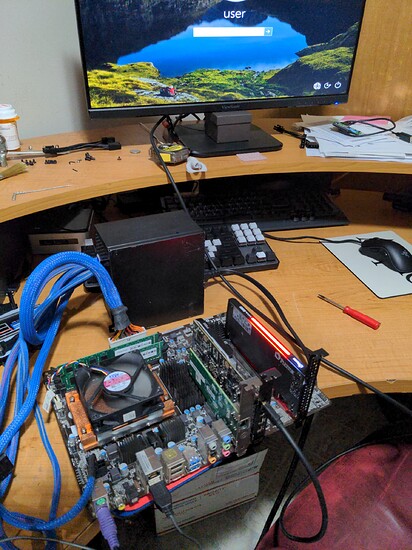 Quick question… What the hell is Y2K compliant HP case?

A case from before December 31st 1999 that likely has stickers saying it was made safe for the Y2K bug.

Ooooh, right. I just read “stick Asrock and FX8320 in a Y2K compliant metal box”. Too early in the morning I guess

So a question about the build itself.

To elaborate: I got an Intel 6i7kyk NUC, 6th gen early enough in NVMe, it got a 970 EVO. It was as expected way way faster than the FX system…
… but now I have a 3700X, it has a Sabrent Rocket 4.0 as its boot drive. It also, like the old FX system, takes a while to boot, where I would have expected NUC levels of speeds considering it is a newer system over all, CPU, SSD, PCIe all newer than the Intel system and yet it still handily beats both the old and new AMD systems to boot.

So a question about the build itself.

To elaborate: I got an Intel 6i7kyk NUC, 6th gen early enough in NVMe, it got a 970 EVO. It was as expected way way faster than the FX system…
… but now I have an 3700X, it has a Sabrent Rocket 4.0 as its boot drive. It also, like the old FX system, takes a while to boot, where in would have expected NUC level of speeds considering it is a nerwe system, over all, CPU, SSD, PCIe all newer than the Intel system and yet it still handily beats both the old and new AMD systems to boot.

i was curious about this as well, especially since this board did not natively NVME boot. After the BIOS mod and doing some (non scientific) testing, booting from an NVME drive vs a SATA SSD, the NVME boot time is about 1.5 seconds FASTER than a medium quality (WD Blue) SATA SSD.

some things i have seen when people have SSD speed issues on AMD builds:

Conclusion: Adding NVME boot support, even on a PCIE GEN2 mainboard, WILL gain some performance over SATA 3. (i actually will do some crystal disk testing after the build is further along.)

BTW heres the Y2K case. Yes, it is ATX compliant…ish. 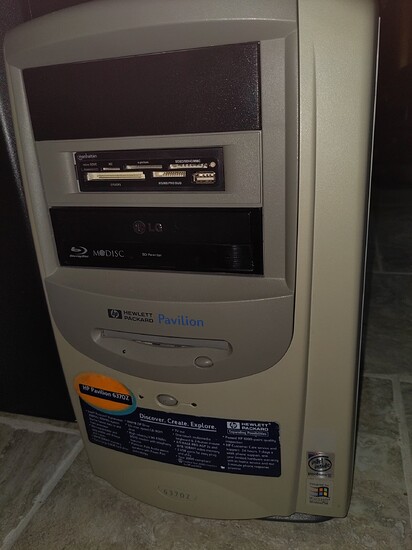 Boot times are mostly a “UEFI is checking/initializing all the hardware and ports” sort of thing, which a NUC is going to have much less going on. Drive speed only matters once Grub or whatever bootloader kicks off the OS.

It’s one of the reason that server oriented boards tend to take assloads of time to finally start loading the OS, they are doing a ton of checks. Feels like it takes a couple of minutes for it to reach the ability interrupt bootup with DEL and go to UEFI options. Disabling certain UEFI options can speed things up.

That said, it does look like Intel does indeed beat AMD in boot times on more comparable hardware: Which PC Boots Up and Shuts Down Faster: AMD or Intel? | Tom's Hardware

Do make sure fast boot is enabled.

Seems as though someone has been probing the win-raid forums recently.

Good job on you for taking initiative.

Is that a PX-256M8PeY plextor drive? Or did you swap out the nvme with a modern m.2 drive (Samsung, crucial, etcetra)?

I ask because those old plextors have a Marvel chipset; which are AHCI compatible (Think Samsung 950Pro’s). They can boot in pre-UEFI motherboards (x58, P45) and Z87 prior motherboards that did not have NVME modules within the UEFI subsystem

(AMD’s case is different as there are 990FX motherboards capable of booting nvme m.2 natively [Asus Sabertooth 990fx] without modification.

I happen to be on the former, my Asus M5A99FXpro_r2.0 does not natively support native nvme (though its cousin sabertooth 990fx does

i use to do bios mods with a hex editor, adding wireless card IDs to HP and IBM laptops. now with all the guides and utilities on the internet it is as easy as watching a youtube video.

the plextor is just a shell, the drive out of it was stolen for a project long before i acquired it. The drive that is in there now is a CHEAPY that did not allow for CSM or any sort of previous compatibility boot. i tried in every slot and messed with tons of bios settings before the flash.

this is a ‘what do i have laying around, and can i make it all work together’ build.

Yeah it does seem more than just number of ports and initialisation checks.

Sorry to derail the thread, I have just never gotten a good answer as to actually why other than what it could be. I mean it matters very little in the grand scheme of things, it would just be nice to have that parity when on the face if it, it seems like it should be easy for them to match given the time AMD have had to catch up and the temporarily more advanced hardware compared to the then Intel platforms.

It is a small thing but it would be something to advertise I would think, parity or better on another point with the competitor.

It is still fast, just when I see how fast it could be…

Not to fuel conspiracy theories. But the issue of chipset drivers, boot order, and why intel always seems to have an edge in windows, may come down to the rumors of intel and ms engineers working together.

While that is just a rumor, take this as an example. Loading windows on Intel rig from scratch, windows will automatically grab relatively up to date chipset drivers and you can get away with being lazy and just using them.

On an AMD rig, trying to use the default drivers will result in degraded performance. That is not even debatable.

Theres half a dozen examples i can think of off hand that make it seem like intel is old friends with ms. But ms tolerates Amd.

This will get off the rails very quickly so I will not continue it beyond saying you are not the first to note this, and the term Wintel has existed to describe it for a long time.

If you are a big company It sometimes is best to install some of your engineers at client/supplier offices. Happens in quite a few industries.

I know it’s kinda OT for the thread but I’ve noticed the same thing and I think it’s just platform difference.

My 4790K system on Z97 boots up so fast, even when I wasn’t booting off of an NVME SSD (yes, native support). The 3700x machine I’m currently using is slower, it takes a little bit longer too boot. But I’ve also made the mistake of plugging the NVME boot drive of that machine through the chipset because I didn’t RTFM and Asus decided that NVME_1 goes through the chipsed on their SoDIMM.2

Maybe it might improve if I move the drive to the CPU lanes, but I doubt it.
Both systems are on W10 latest whatever craptastic version it is.

I’m on CPU lanes on my MSi X570 Gaming Edge WiFi and it is still as slow as yours I would expect.

Yeah it is just a platform difference, but it is annoying to still feel like their systems can’t off the same complete experience, even if its just a small thing. Even stuff like ram is still a bit odd on AMD and PCIe 4 messing with the USB. Just feels a bit second class

PCIe 4 messing with the USB

This is new to me! Had issues with only two USB devices ever, the Logitech Streamcam and a cheapo SATA to USB controller.

Yeah it is just a platform difference, but it is annoying to still feel like their systems can’t off the same complete experience, even if its just a small thing. […] Just feels a bit second class

I agree but, at the same time, I’ve never really had such a bad experience to call it “second class”.
The only issues I’ve had with RAM were due to bad sticks. Besides that my 3600MHz C18 kit has been plug and play without any issues. Maybe if I tried to tighten timings or use a more aggressive kit I might have some issues.

Maybe this should go somewhere else but yes.

There was videos about it from Paul’s hardware, agesa 1.0.2.0 was supposed to fix it but it didn’t for me, or quite a few others. PCIe Gen 4 for some reason causes interfernce on the USB stuff, causes devices to drop out for a moment and come back. Really annoying but I have it to a workably stable state, but it still freaks out in some situations, but I know what they are and how to deal with them. But its still broken at a system level somewhere, not sure if its, CPU, PCIe signaling, USB Signaling, Motherboard layout, specific components used… No idea and no one seems to know either, there have been fixes tried that don’t work and the issue carries on.

The only sure fix is to turn off PCIe 4 and force PCIe 3 in the bios. Which I don’t want to do as I am using a PCIe 4 NVMe SSD, granted I will likely never make use of the speed but I would like the drive I paid for, the motherboard I paid for and the CPU I paid for to just actually do what they are supposed to do.

There are mostly fixes available, driver combos, bios updates, to fix AMD issues. Except the the pcie4 usb issue. That has stuck around a while.