because it has my name

He's a smart guy. The gorilla I mean. 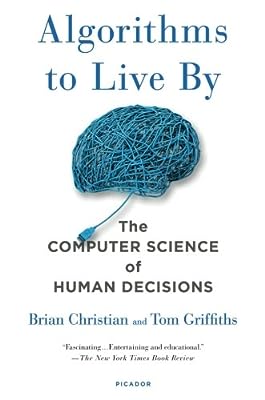 Algorithms to Live By: The Computer Science of Human Decisions

What should we do, or leave undone, in a day or a lifetime? How much messiness should we accept? What balance of the new and familiar is the most fulfilling? These may seem like uniquely human quandar ...

@Helium_3 and all, I think that if we keep the political discussion relavant to the history of the time and how it applies in the context of the book then I think it's good and necessary to the themes of the story. We should limit it there though and keep it in that context. I think the book of the month participants are mature enough to have a thoughtful political discussion without it devolving into personal attacks on currently held feelings and beliefs.

Such a good book.

I'm all for this one because I already have the audio book (which I haven't listened to) narrated by Stephen Fry.

Poll is live folks. Go on over and vote: https://forum.level1techs.com/t/book-of-the-month-official-voting-april-may-book/115291

I don't know about the others, but I'm finally going to have some more spare time in the next 30 or so days. How about we do a double read this time (if others are in the same situation) for the top two books?

To put things into perspective:

Neuromancer was 271 pages - slow read.
Foundation was 256 pages - fast read.
Hitchhiker's Guide is 193 pages - seems like it would be a fast read?
Ivan Denisovich is 182 pages - no idea about this one...
Killing Star is 340 pages - if this is a Gibson-style book and it gets chosen, someone's gonna die.

You may find 130 odd pages though fiction, quite thought provoking.

Still faster than the gulag archipelago, i plan to read this soon.

oh I know, I read it in high school just like you did

sits above the battlestation

i bought it for school. But i don't have it with me now.

I think I'd see a lot more to it then i did then on a second read.

The Rouge One novel is very good.
Audiobook on Audible is good too.

I forgot to put my book suggestions but I'm down for Hitchhiker's Guide to the Galaxy anyway.

I actually will not have more time this month esp with computex at the end of it.

With that and the notable lack of enthusiasm from the others, it's safe to say we can trash that idea

I would have been fine with that idea. Maybe me and you can just talk about it after we are done with May's book of the month.

We'll read the #1 voted book first, hopefully finish it half way through the month, and then if all goes as planned and there's at least one more person to join in for #2... then we do that one as well.

And those who have already read it before can join the discussion as well. The more the merrier.

Dr. Kelly Brogan wrote a book titled "A Mind Of Your Own", where she reports on the over-diagnosing and prescribing of psychoactive drugs to an unprecedented percentage of girls and women in this country, the awful side effects, and how to ween off and reduce withdrawal. Also, natural remedies using nutritional diets, supplements, and exercise are detailed with stories of patients who have successfully regained freedom and well-being.
This book has been the target of a media blackout, the likes of which the publisher has never experienced before. Interviews, advertisements, Book Signings were rejected worldwide. As a result, the author published Chapter One free online and through word of mouth the book made the New York Times Bestseller List:

A Mind of Your Own by Kelly Brogan MD

Bold, brave, and revolutionary, A Mind of Your Own takes readers on a journey of self-empowerment for radical transformation that goes far beyond symptom relief – into true healing.

This sounds like a really fascinating and relevant read. Our poll is up for this month, but do suggest it again for next month.

You can still read the first chapter free if you follow the link.
The way things are heading what with censorship, next month may be too late.
This doctor has bucked the establishment, and historically many who have done this before her have been discredited, and have had their license to practice medicine revoked.