Hey guys I am doing a mini itx Halflife inspired build on a budget here we go.

Here are some more pictures of the painting :D

i like the case, but i'd prefer to mobo to be in vertical position with exhaust on top.

Basically you suck cold ground air and spew hot air out on top.

Looking forward to it.

On the bottom, add HL3 confirmed (tiny, subtle). For sh*ts and giggles.

Also if you're going to use an optical drive get a slot loading one. They look more futuristic and slick

If you can find any way to do it, I would suggest getting the bitfenix logo off, and replacing it with a lambda symbol. That would be the creme al a creme

I think he did. One of the pictures shows the front without the BitFenix logo on it, and black spraypaint over where it was.

I'm hoping we'll a headcrab somewhere, though. Maybe as a USB flash drive casing, or something. =)

I wonder if there is a way to "refresh" blogs after they have been updated. (such as with yours, you could refresh the blog when you reach a major point.) You will probably have to post a finished blog post when you are done with the whole build to have people see it.

I will just leave it the way it is for now and repost a new Updated version when I get the motherboard and paint it :D

I liked the pics of the paintwork you had done, looks very good. Without intending to do a Half-life theme I've also got a Bitfenix case in a similar colour scheme: 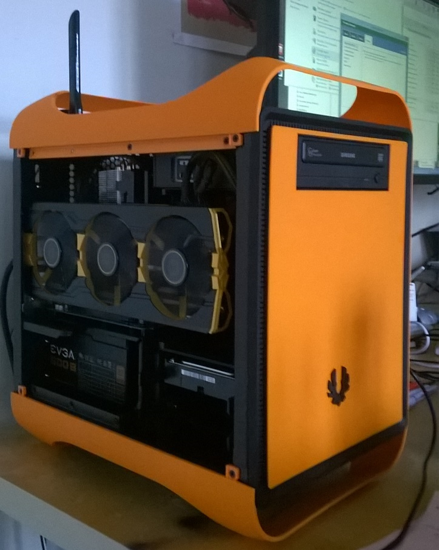