Back when my mother had satellite internet, all the coaxial jacks in the house were wired into a messy splitter box (but they were all labeled).
When she switched to cable a few years ago, the Charter installer cut all the RG59s (including the labels), took all the RG59 splitters, installed 1 RG6 splitter, ran 2 RG6s (one to the modem, the other to the TV), and called it a day.
This is what remains of the old wiring: 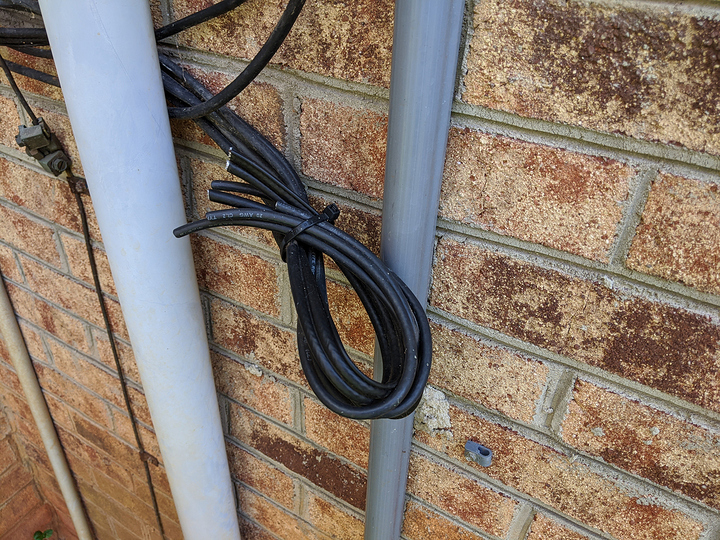 coax.jpg2016×1512 1.26 MB
Now she has cut her TV subscription and I gave her my old antenna. She wants to watch TV in the basement, which is now hooked up by RG6 to the splitter. The antenna is on the second floor.
I’m going to get Charter to unhook the RG6 that is running to the TV (they have some weird plastic guards I don’t feel like messing with).
I plan on repairing all the RG59s because I have no clue what runs where since the labels are long gone. Would leaving them with open F-connectors pose any more of a risk during thunderstorms than they currently do? Is there something I should do to shield them after connecting them all? (I was thinking I should mount a box for them to rest in, if for no other reason than to prevent corrosion during storms.)
rockking March 7, 2020, 5:12am #2

Figure out which halves go where. Put new ends on and then get a joint. That’s what I would do anyway. Otherwise you could try to cut back the out sheathing. Roll a ton of that outer cabling back. Remove the inner sheathing. Solder solder and heat shrink. Then outer wire. Same thing. But I wouldn’t trust it as much as just couple new connectors and a joint.

EDIT: wait what? why soldering??? i see cut ends, get compression fittings and the stripper and compression tool and put new ends on and use a butt connector to add more if needed. EDIT: ah! like you said

EDIT: also make sure it’s rg59 and rg6, i’m sure you already saw it printed on the outside of the cable

You know j did t think about that. You could use those presoldered connectors pretty easily and it would provide a barrier between the two cables.

I repaired them all with F connectors (1 RG6, 5 RG59s, 1 dual-RG6 from when she had satellite which I scrapped entirely) and shoved them inside the splitter box (which is now very cramped inside). I taped a plastic bag around the unused ones to get some protection from the elements. Should I do anything more?

That bag can and will trap moisture. maybe throw some of those silicon beads? i usually just rub some die electric grease on the threads and would just shove it in the box and close the lid, no bag. IMHO

Good idea, I found some dielectric grease in the garage so I didn’t have to buy any.