Ok tried diving into freenas for my home HTPC/NAS build. But asking them about 10gbe stuff and talking about my setup. I realize they are a bunch of hardware nazis. You know that kid you met when you're young and tells everybody u have cavaties? Those socially inept, people who like tell u u can't run Freenas on AMDs or the people who say you HAVE to have $90+ dollar headphones or $100+ switch keyboards.

They even have more stringent hardware requirements than what is required to run hackinstosh. Gotta use non-AMD cpu, only ECC ram, blah blah blah, only use Intel or X Nic cards, Only X raid cards.... cmon B*tches give me a break. I don't want to be con into your zombie box.

Anyways I'm thinking of WHS or Windows Server 2012. Anyways I found a few alternatives to ZFS. Drive Bender, DrivePool, UnRAID & FlexRAID. Anyways just wondering if anybody have experiences on this. I'm planning on buying a cheap 90 dollar 8 port sas raid card, but if I can get JBOD setup it would work more as it will save me from buying 2-4 extra disk since I have alot of variety of sizes of disk such as one 4TB Seagate, two 1.5TB WD Blacks, two 1TB Seagate and two 1.5TB Seagate. It would save me in buying 4 4TB and two 1.5TB Seagate to do two array of RAID 5.

Just realize Windows 8.1/10 has something like ZFS it's called Storage Spaces.

You can run FreeNAS on an AMD CPU, but Atoms work well too for a cost effective machine. You don't need ECC RAM, but you'll be find probably for a home server. You probably don't need 10gbe for a home server either, and with HDDs, definitely not. Be sure to get NAS rated HDDs.

Intel NICs are definitely a requirement for 1gb Ethernet. 10gbe and up, other brands are often better.

If you aren't going to use ZFS or BTRFS for RAID, then don't use software RAID at all. Just get a hardware RAID PCI card.

Also, if it's your home NAS, who's making such a fuss about it? It's a freakin home NAS, but your business’s life sake.

Dude, RockStor is your answer. RockStor is a Linux NAS OS that is free and uses BTRFS instead of ZFS. Here are some of the features:

RockStor is partnered with 45 Drives. They want you to use ECC memory for the integrity of your data, you're free to run it without it

You only really need 10gbe if your doing crazy stuff like distributed workloads or visualization. If your just storing data and streaming gigabit will be more that you will ever need.

ecc is nice to have but you should be fine without it.

Intel nics are preferred because you probably will never run into compatibility problems.(hardware instead of software controller)

just make sure the raid card allows the os to directly access the dives. some cards can be flashed to do this.

I like 10GbE. That's the only reason I'm making a home NAS/server. Cuz I have 4+ people on the router and at least 2 people are accessing it at a time. Usually it's copying ISOs & watching Blueray/HD movies. I raid them just to get 200+ MB/s transfers and got 10GbE so i don't get bottleneck by 100-120MB/s limit on 1Gbps. I don't wanna bog down anybody else on the network if I'm transfering also.

Maybe you guys haven't seen my post but it's here: https://forum.teksyndicate.com/t/help-with-10gb-pc-to-pc-network/84438/16

Example of my transfers: 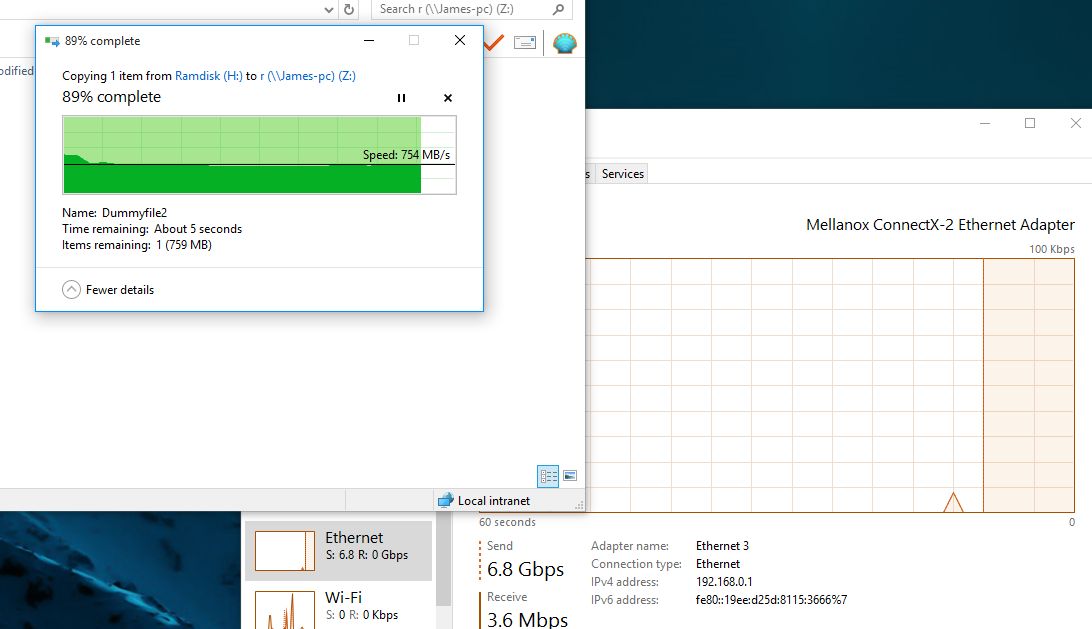 Congratulations you found out what the freenas people are generally like. And probably why the whole ecc myth keeps being pushed around.

Nothing wrong with zfs and you can also use http://www.ZFSguru.com which is a basically FreeBSD with a web interface.
Also has several services or apps as you would call the. Whether it's for you is something you need to decide, but it's pretty straight forward to setup pools and get smb and nfs shares going.

When you go into places like this everyone will comment on every system and no system will ever be perfect. That said the Freenas community is full of those people.

that is why I suggested RockStor. It is not ZFS or FreeNAS. It is BTRFS and Linux.

I will second Rockstor. I was awesome when I tested it now I just need to buy hard drives to fill out my microserver then I'm good to go. $400-500 in hard drives is by far the hardest part of building a nas.

yep. and since it uses BTRFS, you dont need hardware RAID.

They have good reason to be hardware nazis. FreeNAS was made with the explicit purpose of storing data reliably forever. If that use case doesn't apply to you, you don't need to be as conservative as they are. For movies, or other cases where you don't care about bit rot, you're better off using a file system with less overhead than ZFS.

like BTRFS -except that BTRFS also protects against Bitrot. You can also use BTRFS with non ECC RAM. RockStor for The Epic Win!! Come on @wendell, When are you going to review a RockStor setup?

As far as I know, the overhead of BTRFS is approaching that of ZFS as they are adding features. You can't add mechanisms for guarding against bit rot without paying for it in overhead, since computing checksums etc is computationally expensive if you do it a lot.

ecc ram doesn't bug me I understand why you need them in servers and such. It's just the Intel bias and the "intel" or brand "x" network cards only slogan. A few of their users also don't like any platform older than z68 as energy wasteful and any gaming platfrom such as z77 as stupid. Thing is I just want to build a server/nas with my spare/old pc parts. I'm not inot making this 2,000 dollar server.

Rockstor is neat. I haven't got into it in depth yet.
You can run ZFS on Linux just fine, though, and that works fine. BTRFS is cool, and will be cool someday, but in testing it was just a hair too sketchy for me. Its okay as long as you have another copy of your data elsewhere, too.

First, the FreeNAS guys are justing using a UI built on top of the OS FreeBSD. So if the FreeNAS guys are actually having problems with NIC or processors they should tell us kernel developers. I can tell you that it will run on AMD processors. I don't know where you were talking to these guys at but they are not well informed. Needless to say don't pick your OS based on what some users on a forum say about your hardware. Many time people can't tell you how a certain hardware setup is going to work if you are using old parts just build it and test it. They can only tell you what they have used and what hasn't work for them. With a gaming setup they can tell you if certain games are going to run on high quality but with NAS there is too many variables in play.

Yeah, OK, I understand what you mean.

For the use case of, for example, storing movies. If you don't care about bit rot, but don't want to go completely insane with something like RAID 0, what do you think would be the solution with highest performance?

I might bug you a bit and hopefully not derail this thread too much. I have an Intel 10 gigabit adapter and on linux I did the whole multiple receive queues, multiple IPs, pinning processes to different cores, etc thing and was able to get about 650 megabytes/sec on linux. SMB traffic is not that fast owing to lack of SMB3.0 I suspect, but on freenas I haven't had as much luck. I have been fiddling with the tunables but I haven't worked on it in a while. So when I get back into that, I might post or @ you for some helpful hints