I need some opinions and expertise.
I’m building a bed frame almost entirely out of 2x4’s and 4x4’s, and I’ve modeled it in SketchUp.

The idea is to forego a box spring, and just use a strong, but well-ventilated frame to reclaim storage space and (mainly) remove our old frame, which has jagged steel beams that the kids can impale themselves on. Mattress is a spring mattress, with the intent on switching to memory foam in 2-3 years (I’ll spare you the details). 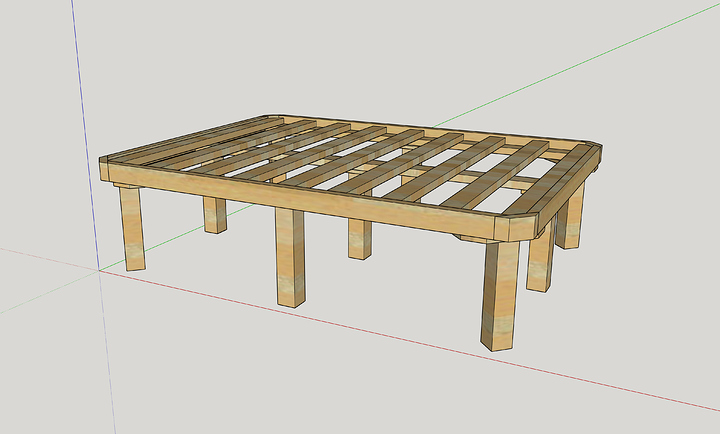 The 2x4s will support plenty of weight spanning the entire length of the bed. You only need 4 legs. They don’t even need to be 4x4. I would use 1x4’s for the slats. You usually want a little flex there, especially with no box spring.

My main concern looking at your design is how you’re attaching the frame to the legs. You should use brackets if you aren’t already planning to, and they need to attach directly to the long pieces. The small corner pieces shouldn’t be responsible for supporting any weight.

Also worth noting, the precision of the cuts for the legs and the importance of having a flat floor both become much more problematic with additional legs. If anything is slightly off, the bed won’t sit flat and will rock, or not all the legs will reach the floor.

One leg per corner is enough.

You won’t have any toes left if you put all those legs on there. I would bet the farm you would regret adding those extra legs in the middle. Every time I’ve seen a couch with a leg in the middle, someone along the line has wrecked their toes on it.

You might want to look at designs other people have done. I’m sure there must be some other SketchUp plans that would fit what you need that you could modify vs designing one from scratch. You could also hit up some sites like lumberjocks and search the projects and build logs there for ideas.

The biggest problem with store bought 4 x 4 posts, beyond overkill and extra expense, is that they are typically from the middle of a tree and offset a bit which causes them to warp. If you just want beefy legs that look good, you could nail two 2 x 4’s together and wrap them with really thin plywood or a veneer. This is my go-to method for making any woodworking project more robust. I will use layers of cheap, sturdy wood in the center and wrap the outside with a more expensive wood to get the look I want.

Also +1 for Matthias Wandel from the video above. He’s one of the smartest people in woodworking. Take note that the stretchers on the long sides of the bed are bigger than 2 x 4 on edge. You need material in that direction to fight deflection. Not just temporary sagging under weight, but permanent bowing. Most boards will have a slight ‘crown’ to it which you want on top, so it flattens out over time. If you start with a board bowed downwards then it will only get worse over time.

As an old school carpenter, I can say there is no such thing as too much structure… that aside, 9 legs is not required however, depending on how much physical activity your bed gets, you may just keep the 9 legs.

Using that criteria, you’re saying he could probably get away with one leg?

Review notes from my own personal tastes:

Built a 230x160cm loft bed a couple years back, leg supported (not bolted to the wall) and 4 1x4x2 L-shaped legs were enough to support 2 adults easily.

I neglected to mention that it must be strong enough to withstand 3 kids under 4-5yrs old. That’s also the reason for the 45° corner feet.

As such, the new plan is to use 1x4 slats instead of 2x4 (should add a little flex), and use 6 legs; 3 on each side. Making another leg doesn’t require much, so if we really need it, I’ll make more.

As far as attaching the legs… yeah. I made them semi-modular for easy moving, but ultimately, it won’t have great lateral strength.
Each leg gets two brackets, with 5 screws each; however, they are attached to those 1x6’s (corners) and 1x4’s (sides). Not so great, but we’ll see. I’m starting on the build today. What could go wrong…

Since you’re forgoing a boxspring the support does need to be beefier than normal but I’m not convinced this many legs is necessary… Go with it if you find it aesthetically pleasing elsewise you’ll be fine just making a beefier than normal frame with 4 legs.

Screwing and glueing in the support rails for the slats is recommended, else you will build an elevator…

Dear lord my back just looking at it.
I just went with an 8 inch lift on my bed frame.
Originally it was using 2x6’s and had a central beam.

Got about 10 2x4’s in Douglas fir, tapped, glued, and screwed in support beams. It was honestly over kill for the queen in my case with a box spring.
For the legs I used 4x4’s that go the height of the base boards and include height for storage under. They came out to 13.5 inches in height. Tapped 6 holes per side, glued and secured with 3 inch #9 general purpose screws. Holding my fat ass up pretty well.
Sucker is heavy but dad informed me it should loose weight over time due to me grabbing undried 2x4’s.

All of the wood has been cut, but ran out of time to assemble today. After a few more iterations, I decided to build the basic frame, secure it with a metric ton of brackets, and see how strong it feels. Then, add wood, as needed. 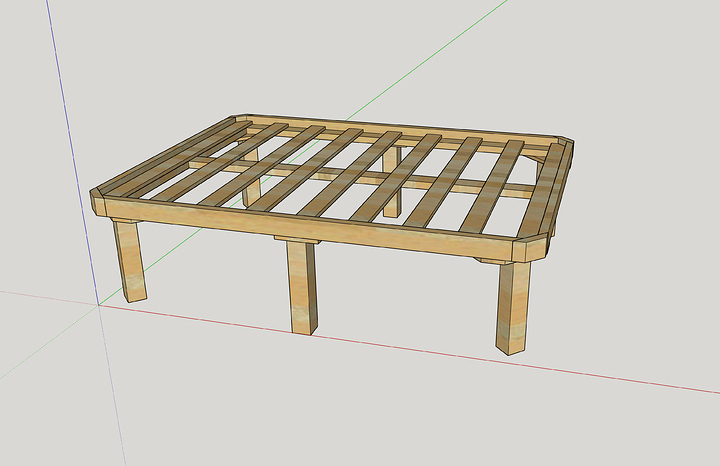 added 2x4’s underneath the end slats and tons of brackets
still gonna go forward with the build, do the legs last, and redesign if the attaching the legs in such a way really is too weak laterally

You could add corner brackets (could be hidden with steel brackets?) - A
or slats (could be a shelf?) - B 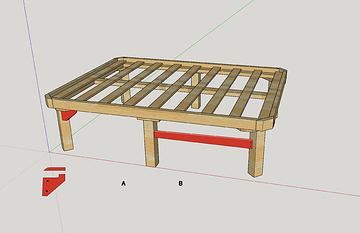 I think that 9 legs is fine, also you can find cheap alternatives here if you’re a hot couple type, yo know what I mean XD

Thank you for participating in. Level1Techs, however this thread is 7 months old, which makes it both past the community necro guidelines and indicates that OP is unlikely still looking for answers.

In accordance with forum policy, I am closing this thread. If OP wants it reopened, please message me.

Necro was an nice impetus to post an update.

I ended up building it with 6 legs and we have been sleeping on it for about 6 months. It’s 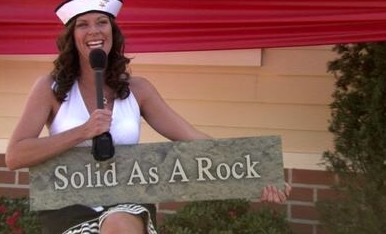 The kids jump and flip and play all over (and under) it, without issue. Only problem really is the weight (I estimate 250 lbs). I’ve thought about taking the middle legs off, but it won’t really change much, so they’re staying on, for now. I also haven’t stained it or anything, no big deal, but I may oil it when we move next.

Here are some shots right after I brought it inside in July: 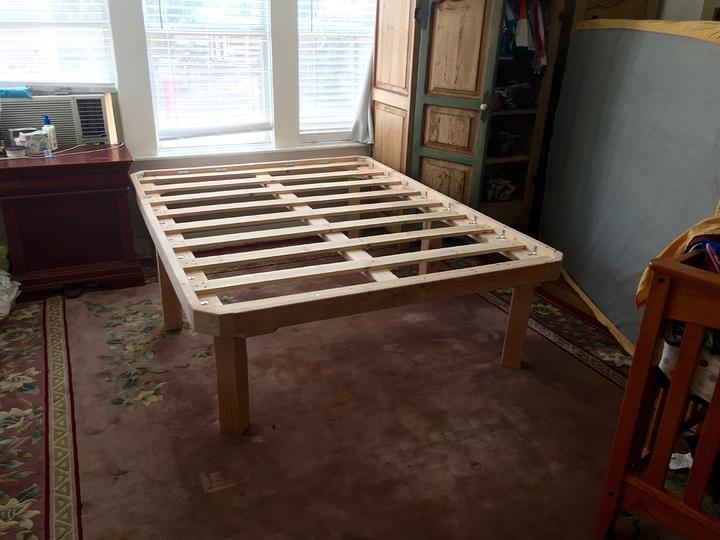 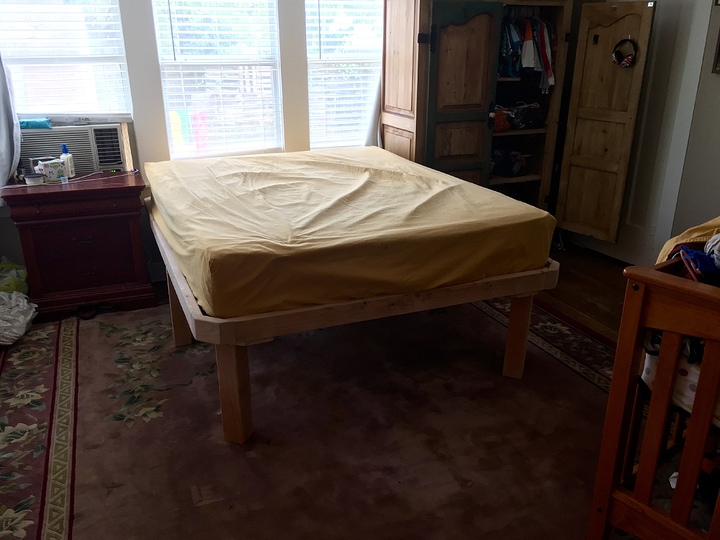 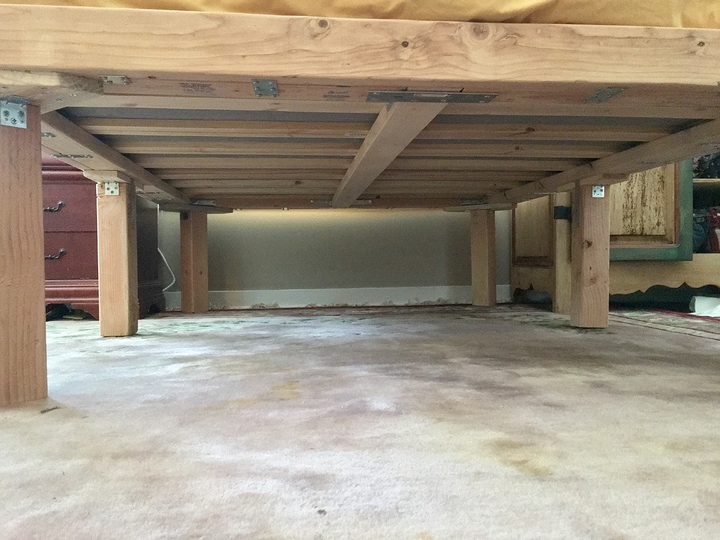 Next step is maybe a headboard to block the window, a bit.

I think if I did it all over, I’d make it more narrow, so all the edges were well under the edges of the mattress, which would mitigate any complexity needed to remove the sharp corners. I underestimated how little the mattress slides across the slats. It doesn’t move at all, so the side and end rails are really unneeded. It was a good woodworking exercise, anyway.