Base clock vs CPU multiplier on Cinebench

I was messing around with 8320e/asrock 970m pro3.
I backed of the HT to 1800 and left the base at 200, NB x10 (turbo and CQ off) and with 1.375v got 4.4 ghz
For some reason vcore still went to 1.4xx but thats not what surprised me.
I got higher Open GL FPS with base clock OC even though CPU and CPU-z scores were much lower.
4.4 with my deepcool gamaxx reached 64 C in under 2 minutes on prime 95
I still need to do more testing on how HT and Northbridge multiplier affect FPS
CPU-z and the render test seem to scale with cpu speed.
Base clock OC and adjusting the HT and Northbridge so far seems to hold great promise for real performance gains on budget boards with 4+1 power and cheap air coolers.
Let me know if too many screenshots...Thanks

That's why I hid this thread in overclocking, a dark closet no one visits:)

This was with just increasing the mutliplier off with C6 and CNQ turned off. Good numbers but 78 fps is not great and cpu is already at 62C 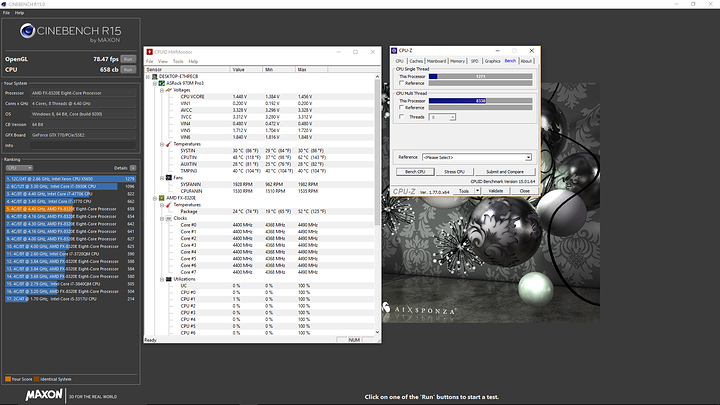 This was with the base at 250 vs 200. I had C6 turned off which turns off the turbo. This is an earlier shot. While it worked it was unstable and at 260 it shut down. I had to put the HD in IDE mode then to get it to work. Not a good idea to push a budget board this much. Second shot is at 260 base clock. Numbers were better but fps in Open GL actually droped. 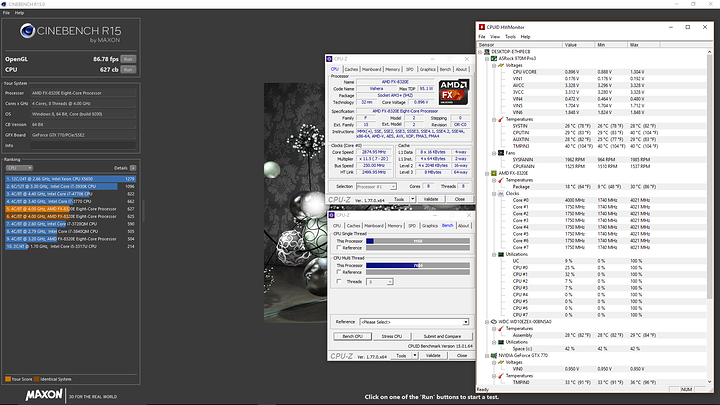 Screenshot (18).png1920x1080 171 KB
This next shott was with a base of 223 and CNQ, Turbo and C6 all enabled My render scores were down to 570's but my open GL scores were in the 90's with one run at 99fps but most at around 95 or so. CPU would throttle back to 3.5 when all cores were at 100%. Single thread stuff and the CPU would Turbo nicely to 4.46.
Most importantly the 26 dollar Gammexx 400 could keep the cpu cool even though the CPU Vcore would go as high as 1.488.
By this time I had stopped messing with Prime 95 and simply used my favorite games for stability testing. I also settled on my standard screenshot which also included my Mem speed. 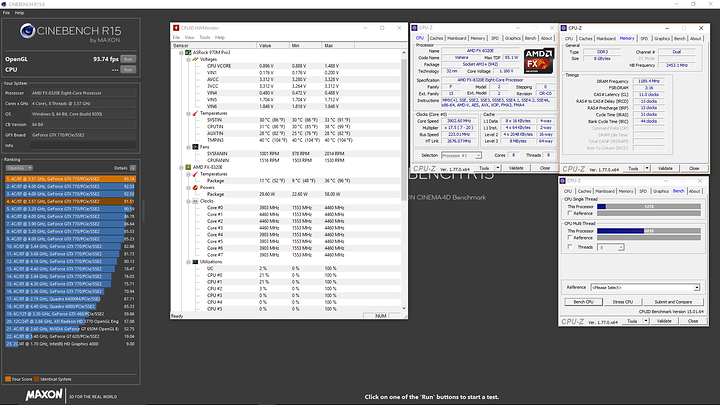 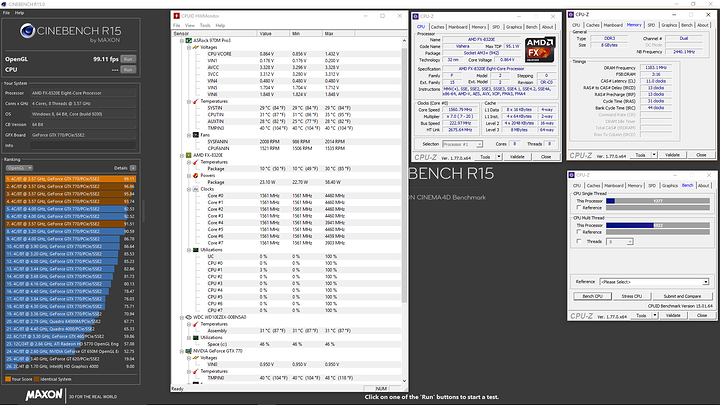 Screenshot (95).png1920x1080 155 KB
This last shot was the best run. One thing that is nice about making lots or screenshots when learning about OC is I can go back and see stuff later I never noticed. A few time I had to use the clear CMOS jumper.
For @flazza

Mine is an Asrock 970M Pro3, 4 no-name VRM's and a refurbished reference GTX 770.
I first turned off C6, Got the base to 223, then trurned on C6.
When gaming my Northbridge would get hotter then my CPU.
Also messed up by not disconnecting the LAN.
There was a youtube video where I guy did a simular OC to mine but he used a stock cooler: