I was looking for badges to earn and stumbled upon “Aficionado” (Visited 100 consecutive days). Does the website count 1 open session for 100 days as just one visit? Because I’m certain I’ve been keeping L1T Forum opened in a browser tab for more than a year now, with probably 1 month of total “down-time.” Where’s my badge?

I guess this should count for “Devotee” as well. I don’t care for Moderation Trust Levels (“Regular,” “Leader,” “Lounge Shepherd”) because I don’t take on such responsibilities - and even if I managed to get them, I’d probably just slack (albeit I do have “Regular” in my title, I don’t have the badge, that’s rather strange).

Just to ramble a little, I’ll probably not be able to earn lots of badges, because statistically speaking, the more you write, the more likely it is that people will disagree with you. And I write really long comments, so the conclusion is fairly obvious, I will not win any popularity contests

Also, not sure what “Tutorial” means on this forum. As in, a wiki page? Or just a simple reply with step by step instructions to follow? If it’s the later, I guess my proudest work would be installing OVMF on Void Linux.

I thought you had to post to get a day’s “visit”? Rather than just lurk? Even logged in, it took a couple of years to get one of my badges the devotee badge.

Yeah, I think there were days in which I didn’t like any post. I guess what I’m asking for is the algorithm for the badges (basically the instructions), so I know if I need to increase my spam or not. I guess I could combine certain challenges (like maybe BSD Challenge? since my pfSense router didn’t really count) with the forum Devotee badge quest. I could make a log / counter for my activity in a public (spam) post.

I tend to lurk and I am known for handing out the likes as if they were candy/Tic-Tacs and even I have not received the Aficionado badge. I am on here every day.

Yeah, now I’m certain that either there’s something wrong with the forum, or someone sabotaged me (most likely the former). I earned the Regular badge on the February 1st, but now, looking through my Badges, I can’t find it. I also tried to re-set my title to Regular, but I cannot find this option. Has there been a regression to the website / a restore from backup?

I keep a session open in the same way, and the afficionado badge auto-applied back in the day.

Pretty sure this is a bug (on Discourse? I’m shocked!).

I’m sure one of the mods can manually correct this, but it might be worth checking to make sure no settings were tweaked incorrectly first.

Pretty sure this is a bug (on Discourse? I’m shocked!).

Big bloated JS strikes again! Still, if I have to make a normie-friendly forum, like e.g. for a company intranet, I’ll use Discourse. Otherwise, I’ll try doing something that requires no JS (maybe I’ll even test my barely existent web development skills and do my own thing, minimalist as possible - I don’t particularly suffer of NIH syndrome, but I sometimes show such signs when I can’t find good alternatives).

The forum software is really not that great. I have constant issues with it. New tabs are not loading, the overlay is completely broken because I am blocking some third party Javascript. Sometimes it is loading and I have to refresh the page 3 times because content is missing.

Regular is removed if you don’t continually qualify for the requirements. It’s part of the Trust Level system:

The user trust system is a fundamental cornerstone of Discourse. Trust levels are a way of…

Essentially what it comes down to is that you have to read The Lounge because there’s just the overwhelming majority of posts there lol.

The forum software is really not that great. I have constant issues with it. New tabs are not loading, the overlay is completely broken because I am blocking some third party Javascript. Sometimes it is loading and I have to refresh the page 3 times because content is missing.

Have been using this forum since its inception, have never had any of those issues except when the server went down.
Also looking at the source there is not even any third-party JavaScript: 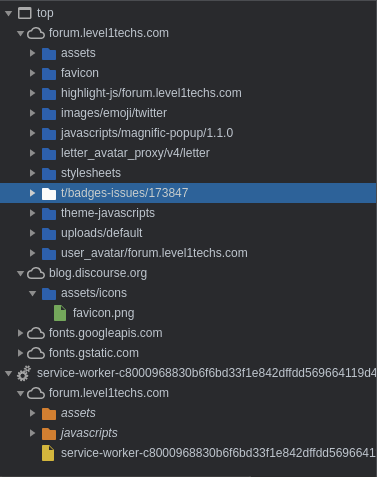 I learned to not use new tabs that often here (though it gets annoying sometimes), so nothing I can say there. As for the broken overlay, that happens to me a lot while I’m in “when I’m bored” thread, where people post discord links (which I especially block), alongside other 3rd party websites that are blocked by default. I can’t click on the top left icon to go back to the forum’s main page until I reach the bottom of the screen. Nothing we can report here, as it’s a Discourse issue.

As for the regular badge, well, it kinda sucks that you lose trust by default and not by explicit / manual admin intervention. Well, I guess nothing I can do about it. Thanks for taking your time to clarify it.

with EmberJS bolted to the frontend.

@Biky do ya just want the badge?

As for becoming a Regular this is a dynamic requirement that we can tweak. Hard to keep up sometimes with the number of threads there so it can indeed be a challenge. There really isn’t a functional difference between TL2 and TL3 other than a Regular can rename other people’s topics and they can get a nickname next to their handle. So it’s mostly for bragging rights

Don’t really care about the bragging rights. I wasn’t going to the lounge anyway, as I read that was a perk for TL3. Reading the link to discourse, it seems like a strange choice to make reading the biggest influence on trust level (visiting 25% of topics in the past 100 days and reading 25% of replies). Lately I discovered the “unread” tab and I’ve been struggling to keep up (aside from not seeing that many interesting or clickbait topics). I could probably easily regain the Regular badge, now that I know the rules, but I don’t intend to spend as much time for a prize that you can lose at any time you stop being really active and conscious about it.

I’m ok with what I have now. Also, if we are to gamify anything, just giving away the rewards takes the fun out, just like cheat codes, albeit cheat codes may provide some fun on rare occasions.

Exactly what I’m saying. Look at the source, it’s not using CDNs besides Google Fonts and if they’re not available the browser will just pick a default.

I wasn’t going to the lounge anyway, as I read that was a perk for TL3.

Lounge is for everyone at TL1 and above I think (if not even TL0), definitely not TL3 though.
I was just saying you kinda have to read it because part of the TL3 requirements is reading a percentage of posts made, and since so many are concentrated on the Lounge, it’s one place that is more or less required unless you read everything else. Not sure if the TL-calculation can exclude categories though, but if it can that might be something to look into for the mods/admins.

It kinda makes sense. The more you read in the community the more you get a “feel” for what’s going on with it.

I could probably easily regain the Regular badge, now that I know the rules, but I don’t intend to spend as much time for a prize that you can lose at any time you stop being really active and conscious about it.

I get the feel, I had it once a couple years ago and I think the only reason I had it was because I was reading up on some massive anime thread with thousands of posts (looking for recommendations for casual watching). Then that thread got closed and I lost it a couple months after that.

The thing is also that this forum in particular covers a wide spectrum of stuff, and some categories I just ignore completely because I don’t have any interest or knowledge in it (looking at you Car-corner), so if you wanna keep it alive you’d read a lot of stuff you don’t really have that much interest in.

The only thing that was interesting for me back then was moving topics to appropriate sub-forums and tagging topics, but that’s about it.

Also looking at the source there is not even any third-party JavaScript:

As soon as you open any thread were people post third party it may load in scripts from these sites for you to access this content. When you leave it on blocked in NoScript the UI is sometimes all over the place.

that happens to me a lot while I’m in “when I’m bored” thread, where people post discord links (which I especially block), alongside other 3rd party websites that are blocked by default

maybe depends how it’s blocked. PrivacyBadger also blocks some things but it replaces them with a click-thing and it hasn’t broken anything for me from what I know.

Looks something like this at the very top of the page. 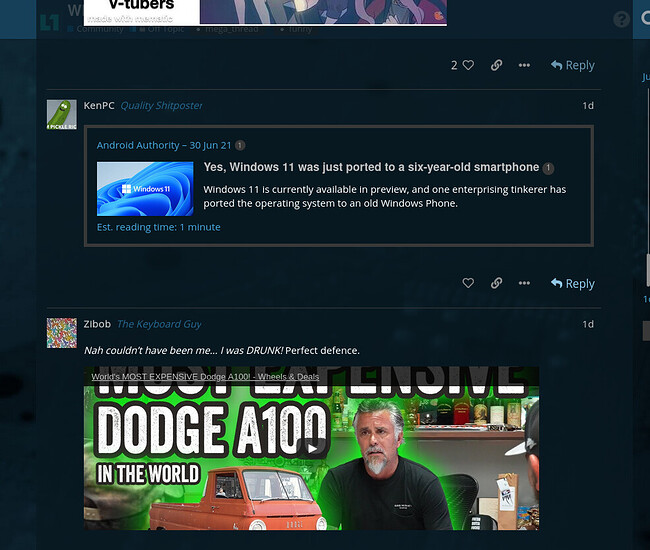 Huh… odd, never had that… Looks like it’s adjusting the Z-Index of the center layer so it’s over the menu… I can actually replicate that when I put a z-index on the .container.posts>.row. So maybe something is doing more then just blocking stuff, who knows.

Also just now I was unable to open a picture uploaded to the forum directly, because I did not allow the discordapp-URL in NoScript.

Ruby did nothing wrong. She is on RAILS.

Wow Biky, you really are doing the engagement thing! You really want the badge!