I have noise problem with Asus Xonar Phoebus and can`t find a solution by myself.

Some guy actually recorded the sound that this soundcard doing while playing games:

Problem is that somehow videocard interfering with soundcard and it`s especially annoying when recording sound from 3.5mm input, when videocard increasing load noise become more powerfull. But noise still exists even if mic input is disabled.

And i tried all solutions that was discussed.

Because i have Noctua NH-U14S i moved videocard to 3rd slot and soundcard to 2nd. 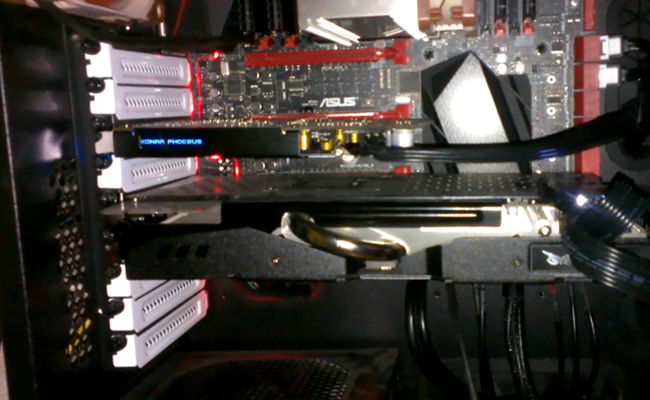 But I tried do it normal way, videocard on 1st and soundcard on pcie x1, no difference. 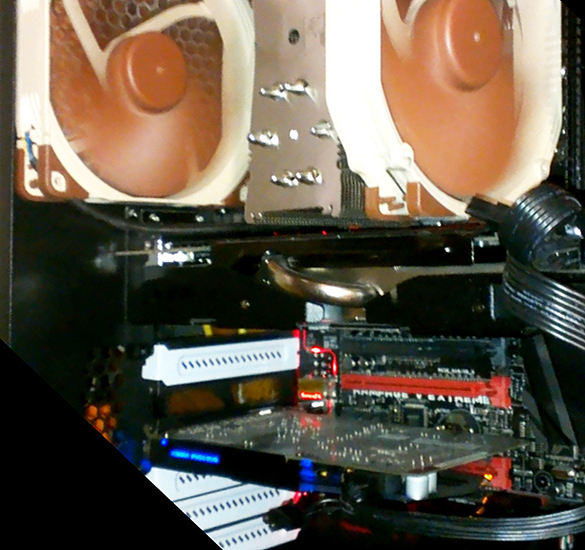 I added dedicated ground and connected it directly to the case. It's 2m metal rod in the ground, when connected it's actualy give a spark, so grounded like it should. No difference with buzzing.

I tried to add ferrite on soundcard power cable. And added more and more while listening, no difference. 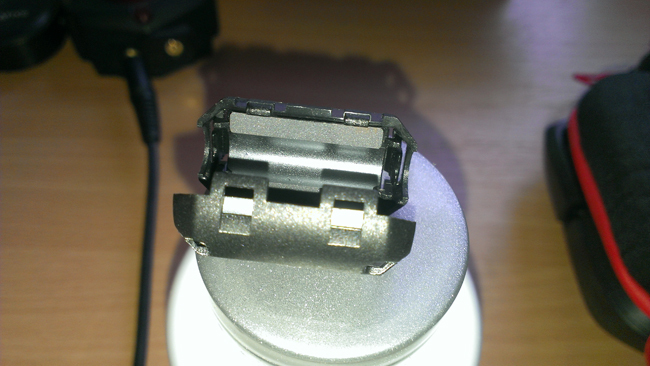 I'm not tried to add this ferrite to soundcard power cable, but then i will need to disassemble power cable on separate cables to do it right, but i can't find spare modular cable if i do something wrong, so i don`t want do it right now. 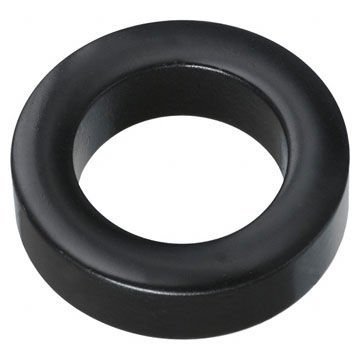 Any ideas? Sorry for quality.

Update:
Had a working solution!

Added ferrite to soundcard power cable, like i wanted before, and it`s working perfect! 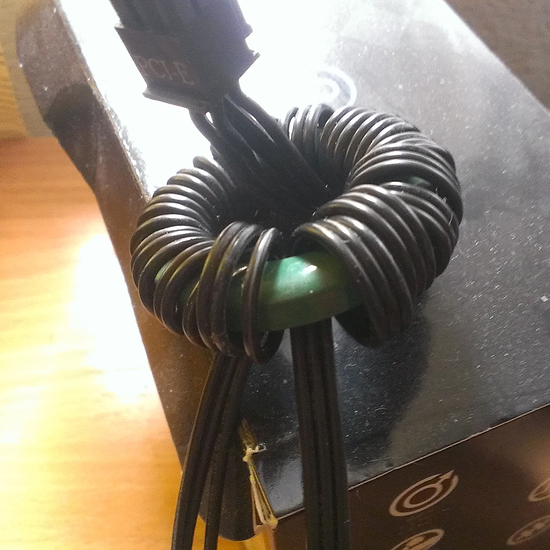 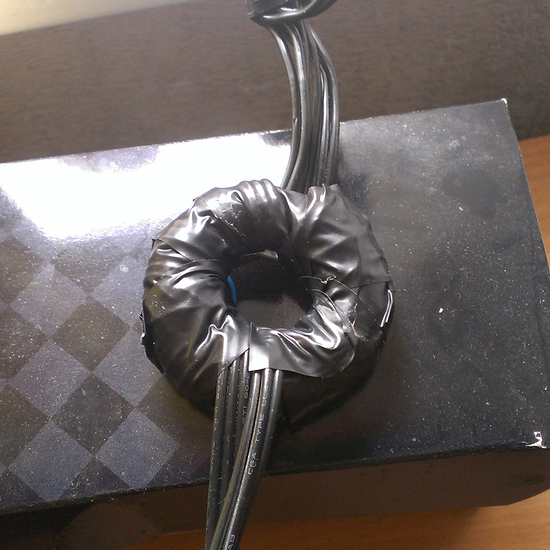 You could try to solder some extra low ESR to the soundcard 12+ entry, some electrolytics along with your run of the mill filter cap.

Another neat idea would be to use a linear voltage reg fed from another PSU, but I'd be really iffy about that as it -might- throw off the regulator in the PSU itself id its directly hooked up to each other through the PCI-e bus.
Pretty unlikely as pairs of PSUs often work in pair without issues.

"You could try to solder some extra low ESR to the soundcard 12+ entry, some electrolytics along with your run of the mill filter cap."

I will do it, if high frequency ferrite will not help, can you give me some articles about or more info? It`s something new, thank you!

And no, PSU is new and it is Seasonic 860 Platinum, second revision, http://www.seasonicusa.com/Platinum_Series.htm

I tried to connect separate PSU cable from another PC just to prove to myself that problem is in additional power cable, it is bringing videocard noises with power and i need to find the way to filter it then. And when i tried it, i actually disconnect all stuff from that second PSU, only MB for start it so i had clear power without it`s videocard.

Mix of electrolytic and poly caps is probably the way to go.

Can you give me more info, please? I`m noob in electronics stuff, but i want to solve my problem any possible way.

You just need to hook up the capacitors to the input of your soundcard, where the +12v and gnd are.

I think its really weird that the VRM system on board is unable to handle the ripple from your psu.

To me it sounds like magnetic resonance feedback from something with low shielding.

Try disconnecting your fans and seeing if you have the same issue afterward.

If it isn't the fans, consider the PSU (or at least moving it far away and seeing if you experience any distortion if you do).

If it isn't the PSU, like it was mentioned above, the capacitors could be an issue, but that is somewhat extreme. A simpler alternative is to unplug and remove surrounding hardware, and this would include a network cable that is connected to your computer (I don't know what kind you have, but if it's cheap it won't be shielded).

EDIT: Just read the update..not sure how out of sync my post is with everything else right now, but I hope my suggestion helps

I tried all things with disconnecting, moving etc, described all in the topic.

Problem is that noise coming from videocard to soundcard throw the its additional pcie power cable. It`s exactly.

I really can`t understand how Asus did that mistake, because i have Asus MB, Asus Videocard and Asus soundcard, can't even do their own hardware to work right together, but have what i have.

Anyone can give me more info about capacitors magic?

Anyone can give me more info about capacitors magic?

If you have a capacitor that isn't fully sealed you would have an issue..but the issue where I said it would be "extreme" is that the board would fry a few minutes afterward because the capacitor would literally pop/fry (break) when trying to retain a full charge ...and yes your computer wouldn't work. So if you have a capacitor issue, you eventually would have a broken motherboard and inoperable computer.

EDIT: What has ASUS said about this? Have you called them up?

I did'n contact asus, because it's not a manufacturing issue seems, just poor design of soundcard shielding. And it`s not only Xonar Phoebus, more pricy card taking noises from Videocard too.

I will try to find right ferrite to filter noise from the cable before it reaches souncard. I will consult with one guy about these ferrites because it is all kinds of them, i need do grab right for videocard noise i think. If it doesn't help, will sell souncard and buy USB one. But it`s more pricy and no 7.1 sound, i still have my creative speakers.

By the way, old creative fatal1ty gamer works fine on my pc, and because it doesn`t have an additional power cable. So yeah...

Good luck and I hope everything works out for you.

Had a working solution!

Added ferrite to soundcard power cable, like i wanted before, and it`s working perfect!

Used something called Iron Powder Ferrite, it has circular form and green paint on it, something like that:

Here something similar i used to apply ferrite to cable:

I will update later post with real pictures, but now i have NONE noises and i'm very happy :)