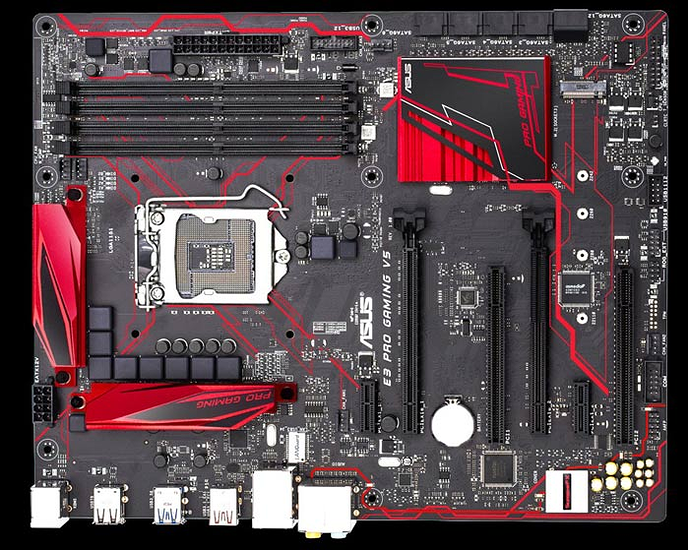 I think this is a positive thing to be bringing to market. With the last 4 revisions of the Xeon E3 being used as i7 replacements in gaming machines, it's pretty much a no-brainer to make this board and keep that market tapped, rather than fold to Intel's arbitrary limitations. Obviously there will be some downsides to using the C232 chipset rather than a 100 series chipset, (I/O appears to suffer) but it's not likely to impact performance negatively.

Limitations appear to be:

ASUS claims the board is already available in the UK for around £120 ($179) but will likely be available elsewhere during Q1 2016.

Well skylake in general doesn't "fully" support SLI/Crossfire, since the there aren't enough PCI-E lanes on the cpu, hell even the 5820k can't do that. Still nice to see a manufacturer make a board with the Xeon E3 cpus in mind.

Hence why it's listed as a limitation. Reading is hard.

Well skylake in general doesn't "fully" support SLI/Crossfire, since the there aren't enough PCI-E lanes on the cpu, hell even the 5820k can't do that. Still nice to see a manufacturer make a board with the Xeon E3 cpus in mind.

Skylake and Haswell mainstream cpu´s have 16 physical pci-e gen3 lanes directly connected to the cpu.
You can basicly run sli / crossfire at 8x gen3 speeds.
This should not realy be a limmitation for gpu performance,
with the current gpu´s we have on the market right now.

Tobad that intel has locked down the ability to run the new skylake Xeon´s on consumer boards.
This new Asus "consumer" E3 board is ofc a cool idea, but it does not make that much sense to me.
Because you get way to much limmited in terms of feutures.

You CONDESCENDING FUCK... haha jk fouquin but just saying this board fits a very small tiny niche market of people using xeons for gaming... which is a reminant from the haswell days. Intel is probably going to lower the performance of the equivalent parts and limit the chipsets from here on out to avoid that. Which I 100 percent approve of

Does this board give gamers something that gaming Z170 boards do but at a much lower price (other than the obvious Xeon support)?

From what I can see the Xeon v5's don't look like tremendous bargains compared to Skylake i7's - maybe the 1245v5?

Also since the Xeon's v5 that are out at the moment have integrated GPU's can this board support that, it doesn't look like it?

It looks nice but I am not sure I see any point.

As it is you save around $50 on this platform, and get a full Skylake quad-core in return. I hope more brands follow and we get a price-to-performance war going on at the $140 price range, essentially opening up a market for $850 Xeon gaming machines that can offer equivalent features and performance to a $1000-1200 i5/i7 machine. A market that technically has existed for the past 4 years.

Hmm Interesting. I was gonna do a 1230v5 build until I read about the server chipset bs. Still up in the air with what I want to do. Decisions Decisions. This, wait for Zen, possibly this (http://pcpartpicker.com/p/Tn4Kzy)

its targeted at Xeon E3s.

but last time I check the E3s where same price or more expensive as the equivalent i5s and i7s which can be overclocked.

I hope you are proven correct and I'd assume ASUS releasing this board means they know more about Intels plans than we do :-)

I pity the fool who buys a Xeon for gaming.

I don't. Price to performance for the Westmere, Sandy, Ivy, and Haswell Xeons was incredible. It's an i7 for i5 pricing.

If you're using a consumer chipset. There are different requirements and workloads in an enterprise environment.

This motherboard is simply pointless from a practical point of view.

EDIT: On second thought, if you're only using a Xeon with the C232 chipset for gaming, this is still a bad idea. But if you game and also do other CPU intensive tasks this could be not such a bad idea if it ends up being cheaper than an i7.