This is a companion discussion topic for the original entry at https://level1techs.com/video/asrock-x370-and-b350-gaming-itxac-new-giveaway-info
1 Like
TheArkratos September 27, 2017, 7:50pm #2

So since you covered this board, I feel like I can ask the level1techs forums for help on something.

I built a computer… a complicated computer…
Long story short, 2 RX480s and a 710gt, with the goal of a 2 gamers 1 cpu setup, all running off this board. I will admit I’m mostly a hardware guy but I was wondering if anyone would be able to help me get passthrough working, if it’s possible.

I'm a scratch builder, I've been doing this for a while, but I decided to push my builds on...

Just as a heads up, this motherboard is NOT an 8-phase motherboard. It uses an Intersil ISL95712 setup in 3+2 mode. And since there are no doublers anywhere on the board, that “6-phase” Vcore is a 3-phase with parts running in parallel.

AHOC has a video detailing the phases of the B350 motherboard and my personal X370 motherboard has the exact same setup.

AM4 Mini-ITX News and gossip!

The ASRock X370 Gaming-ITX/ac uses an Intersil ISL95712 and Fairchild FDCP5030SG dual MOSFETs. Since the ISL95712 maxes out at 4+3, I’m thinking it’s either running doublers or it’s running some FETs and chokes in parallel like the AB350M Pro4. [image] [image]

To be honest, I’m disappointed in ASRock with their advertising of this being “8-phase” when it is definitely not.

It is an 8 total phase

The ISL95712 can’t reach total 8-phases without doublers, and on this board it’s setup as using only 5 phases with no doublers at all. 3 for Vcore, 2 for the APU stuff.

They are using marketing wank, there is 8 phases just some are doubled and some are for memory

I have this board for my portable LAN rig setup that I took to Quakecon this year and it is a fine board, not perfect, but quite a step up compared to the other ones available. However, if ASUS decides to come out with an ITX AM4 board this year I will probably switch to that as long as it is a considerable improvement over the ASRock board and not just more of the same.

My main gripe with the board layout other than the phase setup already addressed, is the addition on the rear I/O of two HDMI ports instead of other useful inputs or even a clear CMOS button. The UEFI is better than the other boards from what I have seen, but it could still use some work. One other thing is the heatsink on the VRMs originally had a THICK (5mm!) piece of thermal material because the heatsink they chose had large standoffs on the base of it. Quite an odd addition, but I got a replacement heatsink direct from ASRock and it is the correct height with what I assume is a 0.5mm thick piece of thermal material.

Here is the old VRM heatsink: 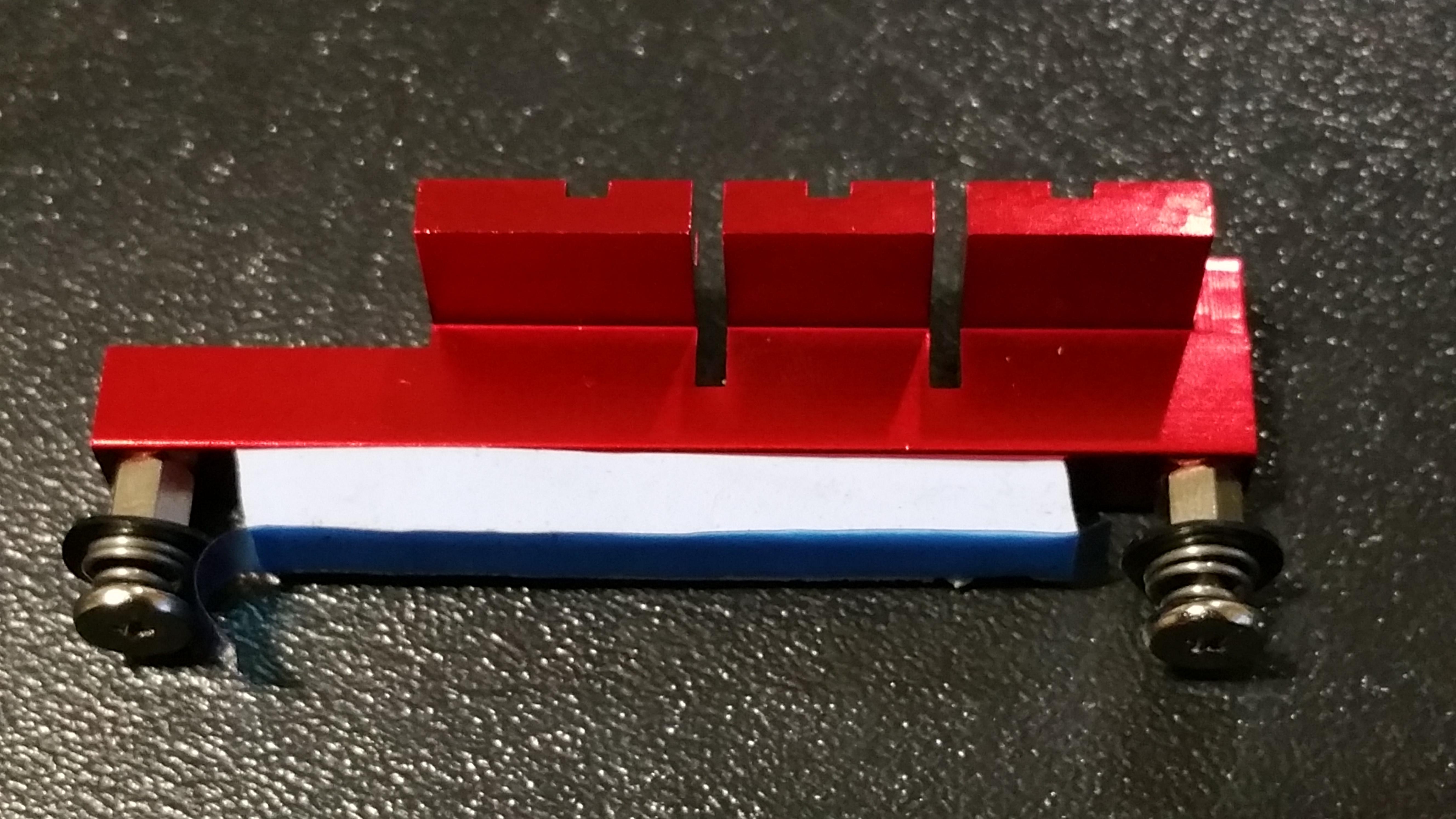 Other than that everything has been running fine on this build:

I have this board and an A12-9800 Bristol Ridge APU. I want to try to do GPU passthrough with that, but I wasn’t able to try anything of the sort yet because I’m still saving up for the m.2 ssd I want to use as the root drive (had some unexpected expenses crop up and had to delay getting the drive so far…)

Two things I noticed right off the gate when poking around the UEFI: absolutely no way to OC the Bristol Ridge APU, even though the APU itself is unlocked…no CPU OC, no iGPU OC, memory only goes to 2400 (which, to be fair, was to be expected since that is all BR officially supports) and no BCLK OC either.

I’m really kind of disappointed in this board, here is hoping that the upcoming ASUS board will have better support for APUs and hopefully allow for some BCLK overclocking. Or maybe there’ll be some other decent mITX board in time for the Raven Ridge launch, when I plan to retire this ASRock board and the Bristol Ridge chip into an HTPC build for my mother.

I’d say that meaningless is a tad strong. There was a video made that you can watch

Who dont you do Twatter account, its kinda nice to follow where the stuff comes from instead of someone writing about that single tweet, and obviously you only follow people who interest you and they kinda tend to be interesting

I follow only few companies because as you can see its overwhelming that feed, although it’d be tighter without Warframe game alerts

I get that it’s marketing wank, but nobody should be buying this for the “8-phase” power delivery.

it is a fine board, not perfect, but quite a step up compared to the other ones available.

That’s how I feel about it. It’s a good board, but the power delivery setup is misleading, and the original heatsink is bad. It has all the features I want, but the little things add up for a little disappointment.

These boards are basiclly 3+2 phase design boards.
This is because Asrock is using the ISL95712 pwm which is a 4+3 phase pwm.
What they basiclly did is they took 3 phases from the pwm, and doubled up the components on each phase, so that it looks like an 6 + 2 phase board.
But its definitelly not a 6 phase.
The only real benefit from doubling up the components on each phase is that it increases its current capabilities.
But in terms of regulation it still kinda sucks, because its still just a 3 phase.
Allthough Asrock does use some pretty decent Fairchild powerpacks.
So in terms of current capabilities its okay.

But i’m personally very dissapointed that they didnt just had spend a few pennies more and used the IR35201 pwm instead.
Then they could have made it an proper 6+2 phase without any doubling.

I’m not too much interested in the video I would rather enter the giveaway but can’t. I remember the time when we would enter giveaways just by writing a comment in a forum thread.

@anon25377527 I don’t really have a need for it. It is already hard enough to keep track of all usernames and passwords for the accounts I have. Besides If I want to read something about AMD or NASA I can just go their subreddit.

@wendell @pgpryan, where are we supposed to comment on to ensure we qualify for the drawing? Youtube or this form?

Gleam contest link in the description

I am so confused. Salutations?

Just tried making a twitter account. At first I thought giving them my email is alright but then on the next page they make it mandatory to enter your phone number. And that was where i made my exit.

Recently finished my build with the board. 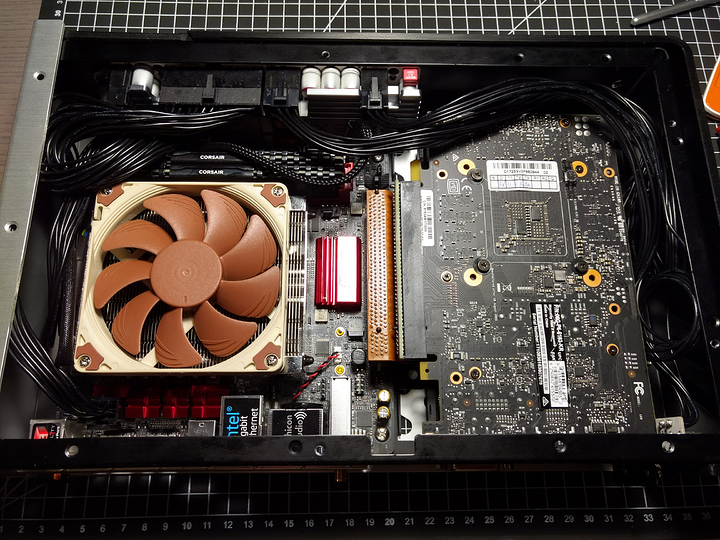 I really need to get some proper feet for the case