Hmmm I haven’t even started my build yet … I have a ASRock wrx80 creator , I see r2.0 has just been launched. What gives I cannot seem to determine the difference …

Asrock changed out the well supported intel 10gbe for a less well supported marvell 10gbe. Despite what sensationalist internet outlets say, the bom did not appreciably go down in price, neither did the msrp.

I think you lucked out if you got a Rev 1.0 as it is clearly the superior board.

Darn I was looking at this board for a future build. Kind of putting me off it now.

I actually did get the v1 board. And after posting here I again went over the specs on asrocks site and also came to the conclusion that just the 10gbe LAN changed .

Intel NICs have imho always had the edge over the cheaper Marvell E.g so in this case I’m happy I have the board with the Intel nic
Now just to wait a few days for my CPU to ship then it’s epic build off time !!

But why … is this a excercise by ASRock to produce cheaper ? Or is there perhaps a shortage of Intel chips for putting on board …

Wild theory ,perhaps there was or is short supply or Intel NICs and only way they can keep up demand for board is by making I a v2 and shipping it out with different nic

Imho ASRock blew it a bit. When I was looking for motherboard WRX80 Creator checked all the boxes. It was just superb WRX80 mobo. If it had cost 1200$ I’d still buy it. Price was irrelevant to me. Imho they totally could make this mobo more expensive and put best stuff.

That said when I decided for this mobo I assumed it had Aquantia from very beginning since I couldn’t find info about x710 on ASRock product page and it’d totally be first thing to brag about so I felt there’s something sketchy going on and just assumed it’s crappy NIC.

But still decided it was the best mobo, despite crappy NIC which just shows how far ahead this mobo was and what it could be. Nonetheless I still recommend it because it’s great mobo imho for dev workstation/server build.

Maybe ASRock didn’t believe in their own brand and decided they absolutely have to compete in price territory because they can’t make more expensive mobo than ASUS. Imho absolutely unjustified assumption since I totally believe they really could make most expensive TR motherboard because it’s just plain good. Sometimes brand is just irrelevant sticker… And I personally don’t find ASUS mobo all that special. MSI plain s*cks. Supermicro is super weird and Gigabyte is out of stock or EOL…

I really don’t get it. What were they thinking that they’re gonna make budget crappy MSI WRX80 board and people buying literally the most expensive non-server CPUs in the market will look at it and decide “Golly gosh, what a great super cheap, soulless, boring mobo that will be very first component to limit my stupidly expensive workstation expansion capabilities. That’s a great deal!!!”

With this platform everyone should go absolute bananas with their offer and put pinnacle of technology on every single step… Not cheap out on damn NICs… Gee… That’s pretty pathetic ngl.

Some pages are still there tho if you know what you’re looking for, but yeah that is indeed very weird.

It wasn’t up yesterday. oh well

Here is a conspiracy theory (ooooh don’t we all just looove one)
Maybe Intel felt a little “offended” by AMD’s great workstation platform which absolutely makes a laughing stock of their hedt offerings and decided to “stick it to amd and or amd partners” by suddenly stopping supply of x710 chips ?

Thats a good one. But Intel needs all the money it can get to make investors happy. Their last quarter was brutal.

But why … is this an exercise by ASRock to produce cheaper? Or is there perhaps a shortage of Intel chips for putting on board

Arock changed the ethernet card on the WRX80 Creator because of a shortage of chips. It is the only theory that makes sense.

Shame on Asrock for releasing WRX80 R2.0 for the same $899 with handicapped 10G Motherboards

Was planning on replacing the ASUS WRX80 for the ASRock R1.0 one for the following reasons: Can overclock CPU, (both can overclock mem) Built in thunderbolt dedicated IPMI eth port and vga plug However, asrock choose to increase their margin by maybe $50 to replace the X710 to an AQC, which does not have SRIOV capabilities and more. In addition,…

maybe we can combine the thread.

I’m happy to combine thread just not sure how ? Admins ? Doooo eeeet please

I know it’s not strictly related to R2.0 drama but in case anyone would wonder what pci-e lanes are attached to CPU and which ones to chipset, I asked support about that and they gave me this schematic: 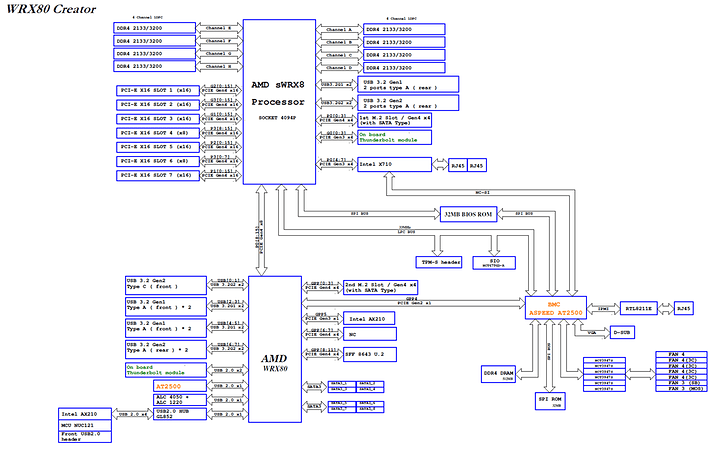 I dont want to hijack the thread but has someone noticed that it isn’t possible to connect 4 GPUs to the mobo if 3 of the 4 GPUs are powered by the PCIe Slots rather than through dedicated power connectors. So for example I’m unable to boot the mobo with:

If disconnect the RX460 or one of the GTX 1050 Ti the mobo boots again. Otherwise it ends in a boot loop.

Yes, I did connect the 6-pin GFX_12V1 Graphics 12V Power Connector on the mobo to my PSU.

The mainboard manual says that GFX_12V1 must be connected in order to install 4 graphics cards. So I don’t understand why it is not possible.

I also switched the PCIe Slots to make sure it isn’t related to a specific slot combination without success.

so actually 116 lanes are used.