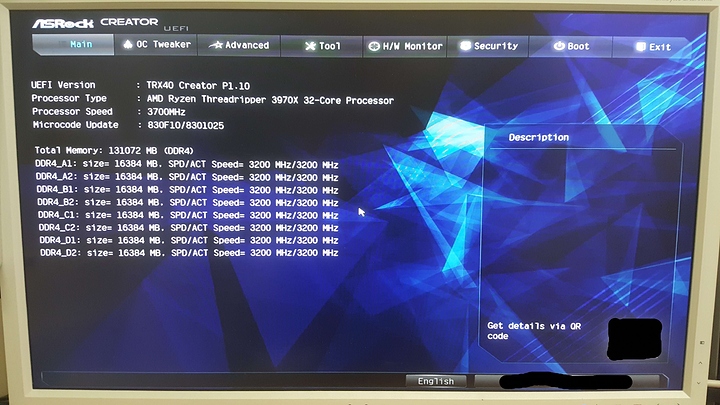 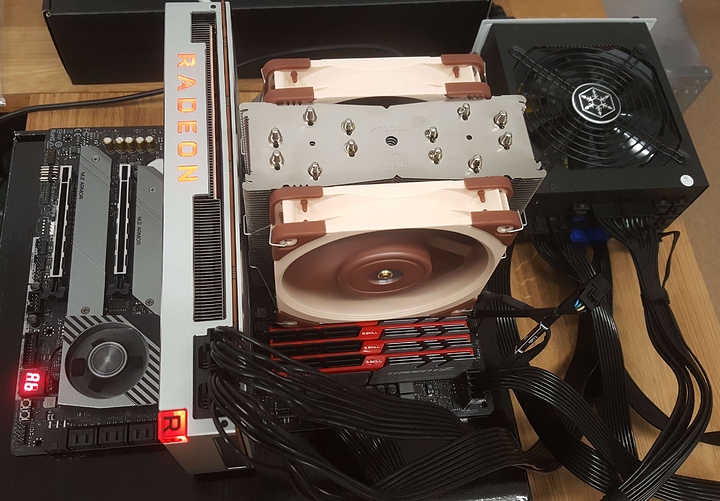 Nice. What offset are you using on your Noctua heatsink? The fan clips look real close to the GPU.

No offence, but why did you go for this motherboard? According to Buildzoid from Actually Hardware Overclocking, this has by far the worst VRM of any TRX40 motherboard…

3mm. I must say clearences on this board are tight AF. 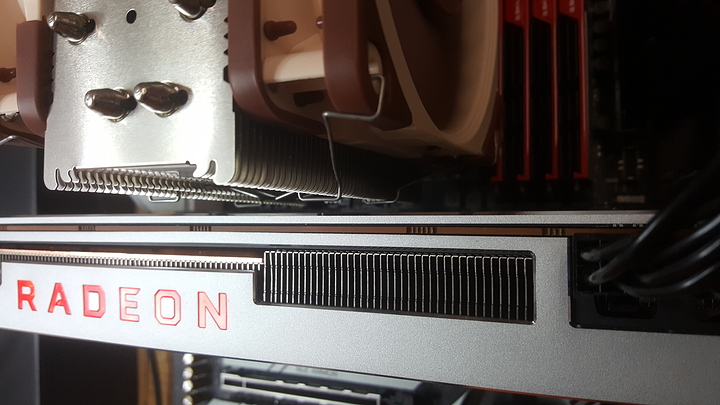 No offence taken mate. I went with it for couple of reasons: ATX ff, 10Gb LAN, 4PCIe, 3NVMe, and most importantly: PS/2 port.
I’m not going to OC the CPU. Just the memory.

Agreed, only some of the Gigabyte’s have this spacing and they’re E-ATX or XL-ATX unlike this one, I think. This was my favorite of the bunch until I heard that the VRM was severely lacking. I really wish they had priced it a tad higher and given it a better vrm.

Im not an overclocker, so if I hit the lottery that MB is the one I would get.

until I heard that the VRM was severely lacking. I really wish they had priced it a tad higher and given it a better vrm.

The vrm of the TRX40 creator is decent enough for the 3960X / 3970X,
it stays pretty cool under load so not really an concern there.
I know that it’s only an 8 phase on a relatively small surface area,
however it is still a pretty powerful 8 phase doe.
Of course it will be at the bottom of the barrel in terms of vrm thermal performance.
That is of course not rocket science.
However it’s still decent enough, it might be a concern with the 3990X,
Because that chip has double the amount of cores.
However i would argue if you pay that much for a cpu,
you generally also want to buy the best board with the best features for it,
cause money isn’t really an issue then obviously.

In terms of overclocking, yeah this isn’t the board for that,
like Buildzoid also mentioned in his video.
However i would argue that the Threadripper chips are kinda pushed,
to their max potential out of the box already.
II mean Threadripper does not overclock that well anyways.

I agree that i would have liked to see a 16 phase vrm,
or an 8 phase doubled like on the Taichi, with those 90A ISL99390 powerstages.
Because that would mean a more powerfull vrm on a larger surface area.
However in terms of value for money the TRX40 Creator is definitely a nice board.
And it does not really under perform that much from other boards,
in the same price range.

it might be a concern with the 3990X,
Because that chip has double the amount of cores.

I have a Gigabyte Aorus Master with a 3960X and have spent some time experimenting with overclocking. The automatic voltage/frequency of TR3 prioritizes frequency at the expense of power. This means stock settings with all cores busy it will sit at the 280W limit all day, bouncing each core above 3.8ghz (and ~1.45v) as it has the power and temp budget. This works well for mix or light duty apps.

If you have a workload that can keep all the cores busy you’re better off setting a fixed voltage 1.2v to 1.3v and finding the ratio that works for you. Be that 3.8ghz or 4.1ghz. For my workload I found I can run 4.1ghz at ~1.3v in manual mode (it will still drop frequency if not busy) and it will use less power than stock (~230W). Pushing more voltage to try for 4.2+ghz runs into thermal limits, mind you I have a custom water loop with a 420mm radiator for cooling just the CPU. Stock settings I get 4.05-4.1ghz, but it uses 30 watts more than said manual settings. All it costs is the inability to boost to 4.3+ghz for lighter workloads.

The VRMs on the TRX40 creator are more than enough for stock or near stock. Thermal headroom is more of an issue when pushing harder, so short of a water chiller running sub ambient or LN2 I don’t see pushing more than 350W into TR3 being productive at all. Given the cooler with this build there is no room to push the TDP.

230W that’s accually not bad! Considering this I might run 3970x around 3.9-4.0ghz tops.
I bought this cooler just because its the best on the market as of now. I have big hopes for NH D15S dedicated to TR.
Cannot put 140mm fans on U14 due to case limitations. The solution that I’ve come up with is what you see. I have a plan to model and 3d print shrouds for this cooler that I hope will improve airflow with the above fan setup. Basically shrouds will go between fans and heatsink. That in theory should bring some improvement over stock U14, as there will be no dead zones on the heatsink.
Dual tower cooler with dual or even tripple fan setup would be much better tho. And until I have one I won’t bother with serious OC. Stock, or as you suggested - fixed freq is all I need for my work. So a lot of tile based rendering and mixed workload that requires good I/O during modeling and texturing.