check the board manual about what memory configurations are compatible. some stuff really hates 4 sticks of dual rank.

That’s common with all Ryzen CPUs. Unfortunately, there is little choice for >=64GB

Which is why I decided to opt for the “ouh arr look at that, isn’t it shiny. Now lets not look under hood” PC build philosophy and forget about the memory minutia as long as the thing works at XMP / AMP.

So I was intending to share this with you folks since November of last year but couldn’t verify that the TPM I built was actually working properly.

Though I can now confidently say that it is and I had just oriented the board header pins wrongly (or correct in my case because I needed a right angled one).

Basically, I fabricated my own TPM for this board (I fabbed one for the X570D4I-2T too) and just wanted to share it with you folks. This was not the same case as the TPM2-SLI since I could find the TPM2-S locally but figured since I was building that, I might as well have built this too.

I recently got a GPU and it’s in the last slot, turns out I did indeed need a custom made one as I needed one that was right-angled so that it does not block the GPU and I don’t think ASRock Rack makes any right angled ones.

Here’s the link to the open sourced repo for schematics and gerber files if you want to fab your own. 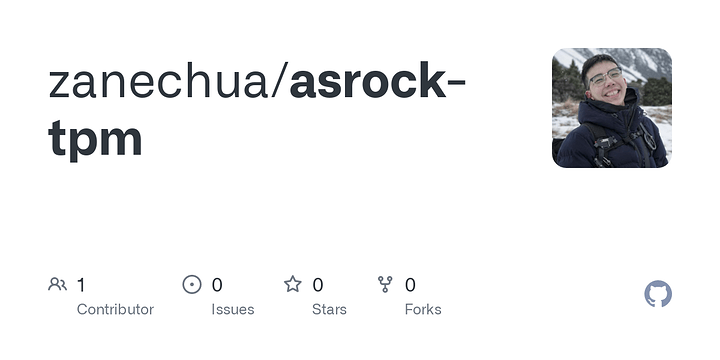 Contribute to zanechua/asrock-tpm development by creating an account on GitHub.

Some pics (more at GitHub) of the right angled variant: 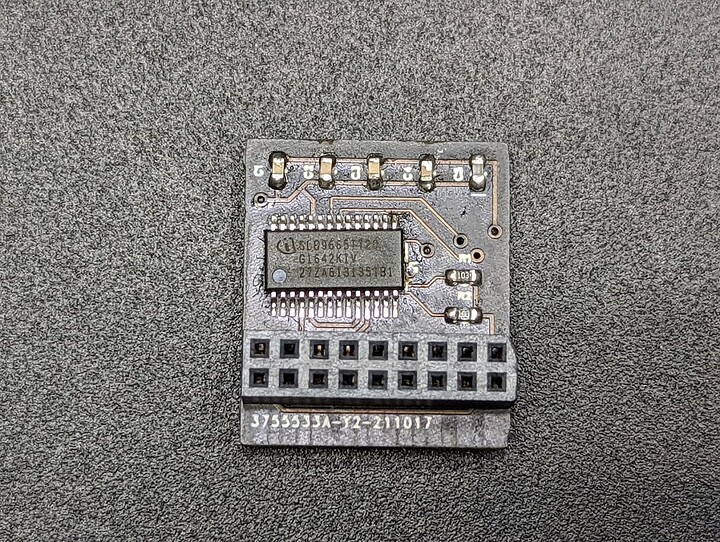 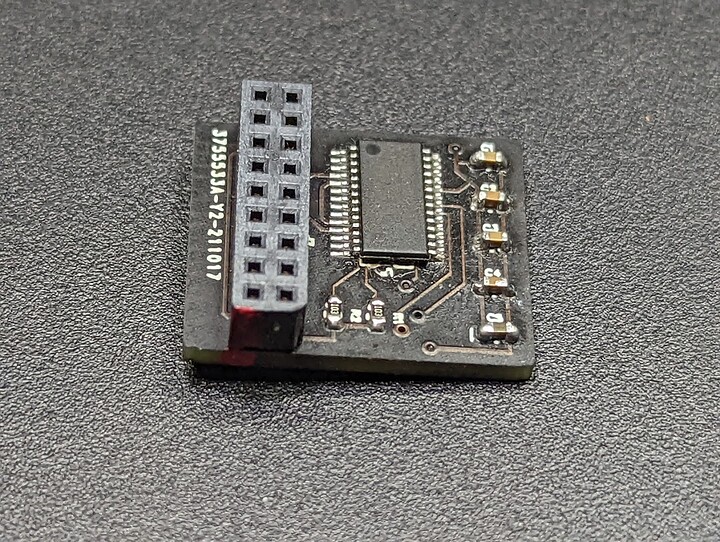 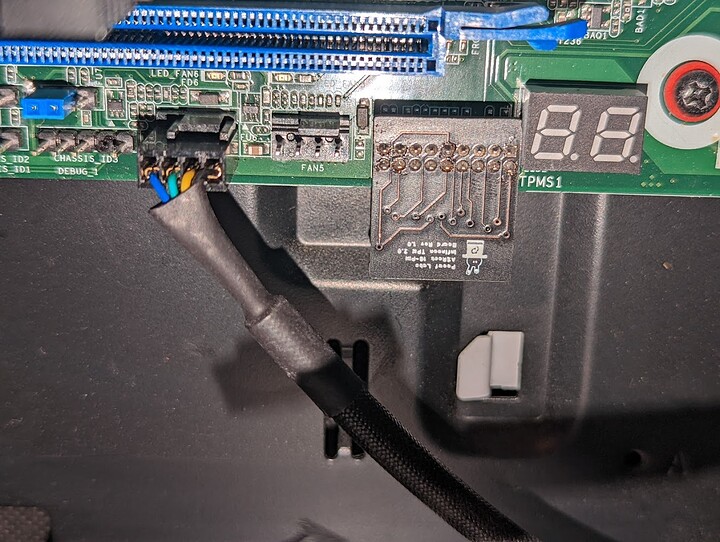 Hello! First time posting here but a lurker since forever! This is my X470D4U2-2T build. Specs and prices:

I’m looking forward to find a proper cooler to replace the Wraith Stealth (suggestions welcome!). The riser is there I can plug the 4x card to a 1x slot. 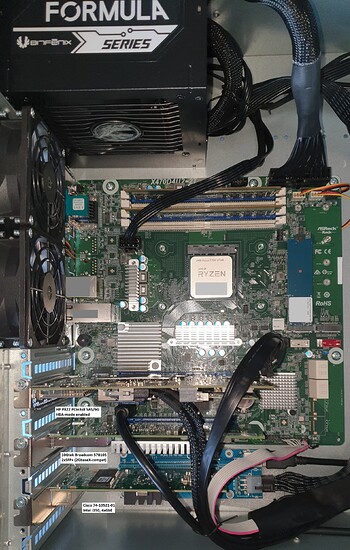 Just think, in 1980 you could have light driven microprocessors if they wanted to proceed! I went Motorola, Intel, and one that I forget what was its name! I had just designed a simple light driven processor! I had a simple 2 bit electro processor that I used in light relays!

Are there special thinks to consider? Also plans to upgrade to 128 GB memory.

5950X here, recently upgraded from 3700X. It’s running stable with PBO and CPB turned on. I have 128GB of the RAM you mentioned.

I don’t think these boards have issues with the 5900X or 5950X. His issue is (guessing) thermals or PSU related. Bad board is also a possibility.

Now we have at least two 120 mm coolers compatible with this motherboard for good RAM clearance, 90º-rotated socket and 4U case height (~150 mm): 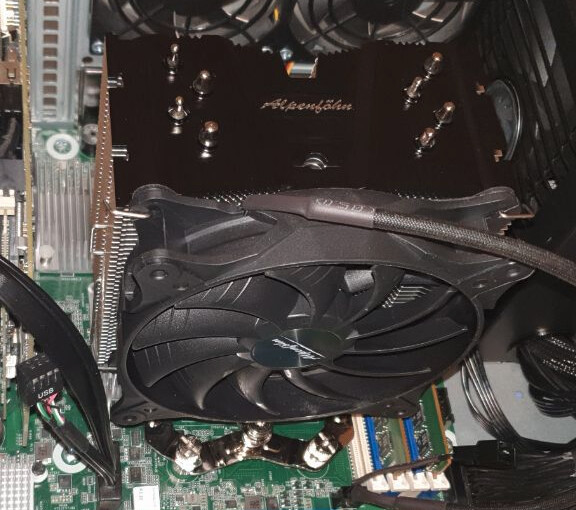 If you don’t have height constraints, I’ve found the Scythe Mugen 5 and Scythe Kotetsu II to be compatible with RAM and they have proper air positioning too. Heatpipes of the Noctua NH-U12S touch and bend the nearest RAM module, so not a good choice.

That cooler list would’ve been handy a few years ago lol, the NH-U9S I got works but I still haven’t installed the bracket to rotate it yet, should’ve done it by now seeing it’s in a 4U chassis but I’m lazy lol.

On another note what 32GB ECC RAM is everyone using? I’ve got a single 16GB stick atm (all I could afford at the time) but gonna have to go 64GB this week and maybe 128GB in the future when I change to a 3950X or 5950X from my 2700. Running game servers and VMs so more RAM more betterer.

Kinda limited in choice being in Australia, RAM City and Scorptec seem to be the best places to buy ECC from.

I find that there’s some wiggle room in getting coolers that the Noctua compatibility page says is “incompatible” to work. I have a NH-U9S on the -2T board with the bracket for front-to-back airflow, and it works well. Technically, the fins overhang the closest RAM slot slightly, but I can even remove and install a DIMM while the cooler is mounted with only a slight bend. Granted, this is likely to only work if said DIMM doesn’t have a heatsink of its own, but if you’re using ECC RAM, it probably won’t.

Thanks, how many sticks are your running? I was thinking of getting 128GB because it’ll be running game servers.

I’m currently running 2 sticks (so 64) because the manual states that they only run at 3200 MHz with two slots populated, otherwise they’re clocked down to 2400 MHz if all four slots are populated. The 2666MHz model of these sticks is on the CVL for the board, but I guess checking memory.net it’s a few bucks more expensive.

My system’s mainly a hypervisor/workstation hybrid and it’s been very stable for me in general.

P.S. I’m not sure what pricing is like at the AU sellers you listed, but memory.net does do international shipping and it wasn’t too bad for Japan iirc.

Cool thanks. Tempting to just go 64GB and run them faster but seeing I’ll be running Proxmox with Windows and Linux for game servers I’m guessing I’ll need a lot of RAM

Pricing is Aus is screwed and I cant get many 32GB unbuffered sticks in general, the ones I can get are close to $400 for a single stick. Think I’ll grab some from memory.net. I did see they have the Samsung M391A4G43MB1-CTD sticks that most people have been using so I might go those seeing 4 sticks are known to work.

I had a similar issue with a 1600AF and a 5600X when using 4 x 16GB dimms (KSM26ED8/16ME) on this board. Any time it was under heavy load, it would crash. The board still had power and the fans stayed at whatever speed they were prior. IPMI failed to cycle the power too and said the board was off. The only way you could restart the machine was to toggle the switch on the power supply.

After testing literally everything but the board, I purchased a new X470D4U and the issue was gone. If you are having this issue, I recommend contacting their support and getting an RMA for it.

Prospective new user here. I’ve read most (but certainly not all ~1500) posts in this thread so I may have missed some things.

Several posters now have this board in use for a few years, how does it hold out? My current server has an FM2+ Asus board in it and IMO it’s time to update. Like, 5 years ago

It’s likely I’ll be using this board for a long(-ish) time, so stability over the years is a key issue on my list.

As it happens my current desktop has a Ryzen 7 1700 (non-X) in it that I’d like to repurpose in the X740D4U and it appears, even if unofficial, to be supported in BIOS up to 3.50. Said desktop is to get a R5 Pro 4650 APU in it to replace the 1700. That way I can finally “retire” the ageing nVidia GT710 CPU from the desktop and have better graphics. Not that I need it, I’m not a “gamer” and my usage is mainly browsing, watching video and the occasional game like Solitaire, Tetravex or Mahjong so nothing GPU-intensive. Alternatively, I’m considering an R5 4500 for the server instead.

Current use case of the server is as a backup/file server, sporting an 8TB RAID6 (4x 4TB HDD), running Devuan from an SSD. I’ll be upgrading the storage capacity as well, gradually as my bank account allows such indulgence

Regrettably, the OS SSD has essentially failed: it still boots and access (SSH, NFS) hasn’t been an issue, yet. But there are errors that lead me to think the entire SSD is on its last legs anyway. I have a spare SSD to get it running properly again, but as I’ll be running the updated server from NVMe anyway, I may as well wait and install afresh. Choices are Devuan and Funtoo, both come sanitized from anything [email protected] that’s systemd

I’m also wondering if I should get 2x 8GB or 1x 16GB RAM for now, both are about the same price here. (my nick has a clue about my location

If you read this far, many thanks

have this board in use for a few years

if you’re going to def get another stick soon… go with larger size…but i wouldnt wait too long, since ddr4 is on the way out… prices just might start going up.

I’ll be running the updated server from NVMe anyway,

if using the m.2 slots, be aware that both are not pcie gen3, and how using both of them will affect the pcie slots

i dont even remember that one… i thought only the APUs had 4000 series names.

is the platform ageing well?