i was force to upgrade my motherboard from the Asrock 990fx Extreme 3 b/c the vrms were thermal throttling my fx 8350 at stock settings no over clocking i was even forced to down clock the GHz and v core and it help a little so i gone to the Asrock Fatal1ty 990fx Killer and i admit its a amazing board i pluged it in and it booted right up no reformatting or reactivating the OS but did freeze up once till i uninstalled old drivers that were hidden in device manager which was easy and didnt take long to do biggrin.gif but now im still concerned about the vrms still reaching 140F when playing games on this new board so im wondering if i turn off the thermal throttling opinion in the bios what temps does the vrms have to be before i start to worry

My brother has the same board and gets the same temps om the vrms, has had no issues for a year at 4ghz on a 8350. I wouldn't worry about it, maybe try to see if you can get some air flow over them. 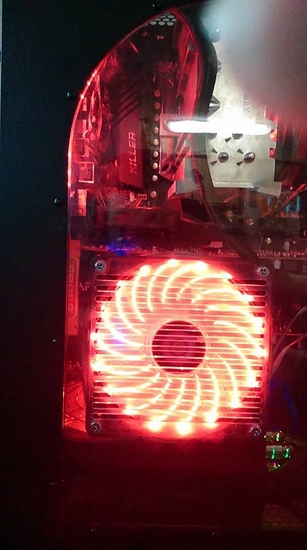 The temps I got on mine were shocking. Replaced it with a sabertooth R2 when I got some spare cash.

Well I would say save up and get the Sabertooth from new egg.

140F ~= 60 celcius should be totally reliable on that board. If you really want to decrease the temperatures then try using the stock AMD 70mm fan off the heatsink as it is quite high airflow for it's size (but kinda noisy)

60C is basicly fine, the 990FX Fatality killer is indeed.
This particular board has indeed some heating issues, wenn you wanne push a FX8350 past 4.5Ghz, But i have not readed about any burned out boards yet.

But its obvious that the Asrock 990FX killer is not an fantastic overclocker.
Because it lacks on some certain feutures in the bios.

i agree with you MisteryAngel i stopped worrying about temps and started to play crysis recently and noticed that my temps on the vrms is reaching around 165F=73F which what im being told that those temps aren't bad at all and cpu temps stay around 135F=57C so as long as the cpu is staying cool im not to worried about the other temps if there made to be around thoes temps anyways so why worry :D but overclocking im not going to bother doing on a 8core b/c it has so much power anyways :P

plus i might be getting a cooler master haf 932 blue edition and put around 12 120mm fans in it :P so the cpu and vrms and other temps will actully be cut in half with it being a windtunnel muahahaha