Universal copy and paste. WTF. It’s amazing, why does no one talk about this?

On iPhones, I’m very impressed with the 3D Touch ability.

What do people here like about their Apple stuff?

I don’t know much about apple today, but back in the day, I loved it when Apple made it so you could move files between Mac and Windows.

Before that, it was impossible cause there wasn’t any file types that were interchangeable.

Don’t know if you can still do this, but I remember it being a big thing back in the early 90’s and hearing how happy my teachers were.

I don’t know how it is today but back when I used OSX (when It was still Mac OS X - 10.4-ish) Spotlight was amazing.

Also freaking color-badges in the file explorer? I still have not found anything equivalent on Windows.

What is a color badge?

you can mark files/folders with a color. Then when you go into finder, you can select to view all files that are marked with that color.

So if you have project files in several locations, you can mark them all purple, then go into finder and tell it to display all purple files, and all of your projects will be on the list.

So in Mac OS you can mark a file with a specific colors, theres 8(?) different colors, you can set them in the file properties - and this works for every file mind you, not just specific file types.

Basically they are highlighted in the file explorer in whatever color you selected. In a very large list of files it makes it extremely convenient to spot a specific file that was marked before.

It is a very niche feature and I can’t really explain how it’s useful because you can use them for whatever, they don’t have any specific meaning of their own. It is very nice to have when working in a team, because those colors are visible for everyone on mac.

In Spotlight you can even search for a specific color and it will list you every item on your system with that color assignment.

I loved it when Apple made it so you could move files between Mac and Windows.

Don’t know if its exactly what you remember, but you can turn on network sharing via AFP or SMB. SMB I assume works similar on Mac as it does on Linux and Windows.

Random screenshot off the internet: 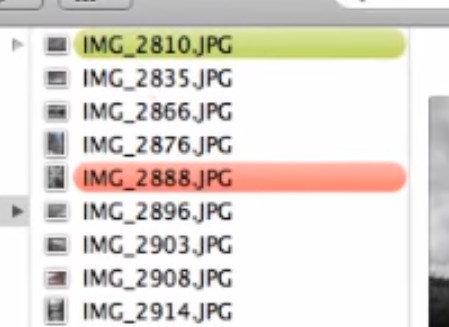 It’s surprisingly hard to find because not many people seem to use it.
Apparently they also extended the concept now and they are using them as tags in general, not just colors anymore. And apparently you can define your own tags?

SMB I assume works similar on Mac as it does on Linux and Windows.

Yes it does, in fact I used my Macbook as a NAS-type device for a long time after I stopped actively using it.

Apparently they also extended the concept now and they are using them as tags in general, not just colors anymore. And apparently you can define your own tags?

You can define your own tags. I don’t think you can assign them colours though outside the ones that have default colours.

Oh @Eden, this was WAY before that. Macs and IBM pc’s still couldn’t do squat over the network. But with the advent of floppy disks, they made it possible for you to actually take a document you had on Mac, and read it on Windows, and vice versa.

The public was extatic on this, and it sold more macs than ever. I remember the press release on this. I just saw it a while back.

Ah yeah. I suppose these days that’s not longer needed.

Oh it was a major PAIN back in my elementary days when the school had apple computers, and they would want you to do a book report, but I had a IBM clone pc.

When this happened, I was so joyful! So were my teachers! Of course, then I never had an excuse to not do the homework lol.

Blows my mind how there is no Android alternative to iMessage without a third party app.

Because every company is greedy, and needs to reinvent the fucking wheel. Instead of using something that already works. And they don’t wanna have to pay some sort of royalty.

I got a free one from my job.

Wait wat. The default Messages on Android does that

Sends uncompressed images? I had a OnePlus 3 and the messaging app was like plain MMS

And does the other person have to be using that app?

Hm, actually I’m not completely sure about that since I never really use it, but Hangouts should do that… no?

Speaking of Android… say about the cloud what you will, but the iOS backup when moving to a new device is amazing on there. You just pop the backup onto the new device and you are where you left of on the old one… Android doesn’t do that nearly as painless, if at all.