Anyone use CentOS 7 as a daily driver? How easy is it to dual boot with windows 10?

Hope everyone is doing well! I have been playing with Linux as a hobby and a learning experience for a while now! Even more so thanks to the pandemic. I have been using it in a VM on my laptop (since desktop was out of commission until now). I have used Ubuntu, PopOS, Manjaro, Fedora, OpenSUSE and now CentOS 7. I have gotten used to most of there package management system and the bash commands. I have learning to compile and build from source as well. Recently I have been doing lots of blender rendering, CAD, paraview and running cfd validations, fea and other number crunching things as a learning exercise as well as hobbyist work. Out of all the distro’s I got the most performance in rpm based distros. Unfortunately certain commercial software like Ansys only support rhel/centos systems, I have tried installing them in other distro’s and doing community workarounds and yet I run into fatal errors during simulation runs. So I decided to stick with CentOS 7. I also upgraded the kernal, adding third party repos, build up to date packages from source or just use precompiled tar files (for scilab, blender and paraview) and use alias and functions to balance dependencies. It all works, even was able to customize it to my liking: 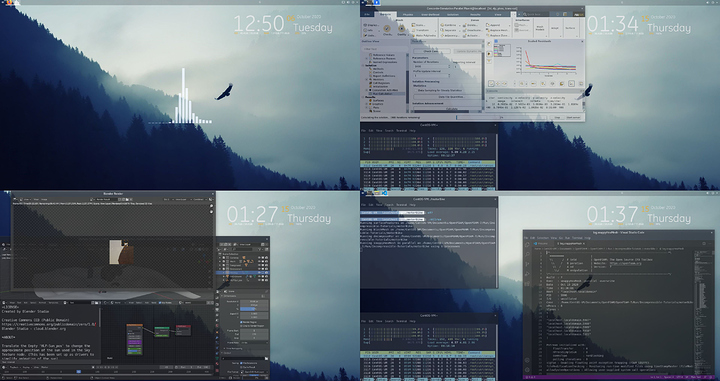 So I am tempted to stay with CentOS 7 and also play with Cuda on Foam-Extend package too. Now anyone here know how well it will play with newish hardware (like Rampage 5 and a 5960X, and in the future the newer rtx cards)? And has anyone got any experience on how I can turn a vm image into a live cd to just copy over install to another drive? Also anyone use steam or gpu passthrough in centOS 7? I would love to try that.

If you’re planning on using CentOS with new hardware you’ll want to upgrade your kernel as there are updates for AMD. You should also take into account the final minor RHEL release has come out and they only backport security fixes so you likely won’t see new features and hardware supported.

Have you tried using your software with Fedora? Fedora is the upstream of RHEL/CentOS so I would be surprised if you encountered issues. Fedora is also more up-to-date as they aren’t as concerned with stability so it will play nice with new consumer-grade hardware

I’ve used CentOS for years extensively as a server OS, but never as a desktop environment. My only comment is that 7 is getting old and has stopped receiving full updates, so I’d encourage you to look at CentOS 8.

I’ve used CentOS 7 for quite some time as a daily driver on my main machine. I’d say if it works for you, there’s no point switching. It’s supported for 4 more years so why not!

I’ve actually found CentOS 8 far more restrictive in terms of package availability, they don’t ship -devel packages for all the packages that usually have them! You can’t even build all of the available packages for CentOS 8 on CentOS 8! (This is apparently a RedHat decision that the CentOS team don’t have much choice in).

The only thing that would impact how well it runs on new hardware is the kernel and since you’ve upgraded it (presumably to a recent version) you shouldn’t have much issue.

Steam on CentOS 7 works as well as on any other distro as far as I can tell.
Not sure about Looking Glass, CentOS uses qemu 2.12, might need a newer version? Not sure.

As for putting the VM image onto real hardware, it’s almost certainly possible. What format is the virtual drive? / What virtualization software are you using?

would be surprised if you encountered issues.

I have found that CUDA does not work on recent Fedora versions, it depends on an older version of GCC. I’ve also had things like VMWare Player and NVIDIA drivers break frequently on Fedora.

I have found that CUDA does not work on recent Fedora versions, it depends on an older version of GCC.

That is odd considering Fedora is officially supported. Has that been a consistent issue?

As promised, I am surprised. Fedora is one of the “mainstream” distributions so I would expect a reasonable level of stability and support especially with common packages like a visit drivers and VMWare Player. What problems have you had?

CUDA versions rely on specific versions of gcc. It’s only recently gained compatibility with the version of gcc in Fedora 32 in version 11.1.0 in September with only 7 months of support left.

The main problem with VMWare Player and NVIDIA drivers is frequent kernel updates which break the kernel modules. The NVIDIA drivers aren’t as bad but VMWare player still needs patched modules in order to run on recent kernels.

Fedora support for these kinds of things are there but it’s spotty at best.

i ran centos7 for a while but changed to fedora.

desktop responsiveness is night and day different in favour of fedora.

i get it, if you need centos for support reasons but there is a fairly significant UI responsiveness penalty to pay.