Anyone Checking Out Gnome 3.18? / I need Laptop Recommendations

Gnome 3.18 is supposed to be coming soon. anyone excited for this? I'm very UN-decisive when it comes to choosing a laptop but the Dell XPS 13 is glancing my eye. so I may pick that up for this on Fedora or maybe Manjaro. I haven't decided yet what I wish to stick with. but any who. thoughts on this? it came out a few days ago.

I am running it right now with opensuse tumbleweed.

Its fine. There are some things they did that are a step backward IMO.

For instance "other locations" is stupid. The way additional drives worked before was fine. IDK why they had to mess with it.

Other then that, I really have no complaints nor do I have any positive comments either. It is more or less the same.

If you are looking at the 1350 one, forget it and go for the entry level macbook pro.

Its 50 bucks cheaper MSRP, and it has less pixels, but it is a faster laptop, with a better key board, a 16x10 screen, AND it uses a PCIe SSD for much faster reads and writes.

it's out already? jesus.

lol as for the laptop i would LIKE to keep it under $800s buck I'm willing to spend a bit more. well the reason for it is because i want to pick up another desktop monitor for my workspace. one monitor isn't cutting it for me anymore. i would like to keep my necessities under $1000.

I miss the Amiga

The super base xps 13 is stupid.

It is extremely over priced, and at that point I would tell you to look at the asus zenbooks.

They also have this macbook air that still has the pcie SSD.

Honestly PCIe SSD or bust IMO. The xps laptop just can not hold a candle to the macbooks in terms of raw performance per dollar.

yeah that's going to hurt my heart. I had a Macbook Pro once but it broke. I'll take into consideration but any thing else you recommend? 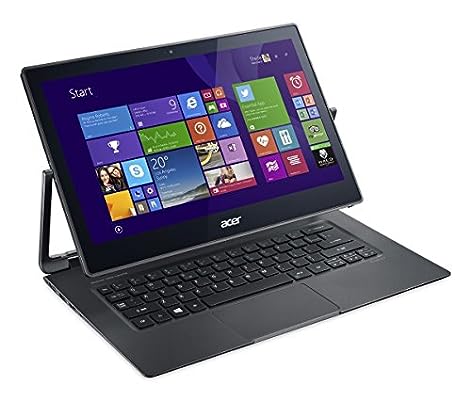 Masterfully crafted with premium features such as Corning Gorilla Glass 3 and a Full HD screen, the Aspire R 13 is a device that is sure to enhance both work and play. Thanks to the futuristic Ezel Ae ...

There is a reason we do not see that design being used anymore on current generation laptops. The hinge is super fragile. Everyone I know who had a laptop like that one all say that their hinge broke after 2 months of use.

If you do not need a laptop RIGHT now, I would just recommend waiting for christmas time.

The Inspiron 13 7000 Series 2-in-1 combines a sleek 13.3" tablet and stylus with the storage space and performance of a laptop.

Can't you force install it on debian?

For Linux on the go I only can recommend Lenovo. Despite all the recent scandals! If you run Linux they don’t apply anyhow.
I by now have my 6th (IBM)Lenovo Thinkpad and each worked like a charm with Linux (Ubuntu).
Even a refurbished older gen Thinkpad (T430 or alike) will be more than powerful enough to run Deb/Ubuntu with Gnome.

I've had excellent experiences with Dell. it's sort of the reason they are my primary choice HOWEVER i am open to options. BUT reading up that Lenovo is adding "Spying" features straight to the BIOS on future devices is of a concern.

Indeed, its totally bad they backdoor the UEFI. Though using Linux so far seems a legit way of dodging the backdoor, as it only works with the appropriate Windows "feature" to reinstall the crapware.

My problem is, I am totally addicted to the trackpoint and the keyboard.

Do you know if the i3's IGPU are good enough for the Gnome Desktop?

Honestly i need this a laptop for College and general use, So i don't really want to spend much.

Dell has the 11.6 inch Inspiron 2 in 1 with an i3, 500GIB of Storage (which i will throw in an SSD later) and 4GIBs of RAM (Which can also be upgraded) i have two 8 GIB SODIMM sticks lying around in an old broken laptop.

Depends on which i3 is used. I cant really speak for the i3 itselve as I don't have ever had one. But my current daily driver has the Intel® HD Graphics 5500 (Broadwell GT2) and it runs without any problems. So did the previous Intel iGPU generation.

I posted the 13 inch link previously in this exact thread, but eh I'm used to small laptops anyways so this size is tolerable. (And I REALLY don't want to spend much.) also ignore the Windows thing there they don't have an Ubuntu Option unless it's the XPS Line.

With the performance of a laptop and versatility of a tablet in one, this do-it-all device adapts easily to your lifestyle.

Also yes the resolution is an absolute sin. but I'm incredibly indecisive. especially cause I'm getting A laptop in two weeks.

So it should be the Intel HD 4400 iGPU. I had that on one of my previous machines. And for me it did the job without any problem.

I have my desktop for the heavy work. and I'm investing on to a second monitor. I'm good on that. but this laptop is strictly for College. I'm not much a programmer yet. I have a novice understanding of Java and C# I'm still learning.

my conclusion is, that the i3 should be capable enough of running linux with gnome on top.
Yeah, just had to mention the screen ting, as it drove me nuts with my first ever labtop in college back than.