+ and - PLED wires for mobo

Sorry if this is a silly question, but my case has two wires labeled: +PLED and -PLED for the power LED on the case; my mobo has two pins for these, but they are not labeled + or -. Please see here: 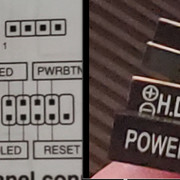 Does it matter which pin I plug the two into? I assume the worse case would be the LED doesn’t light up and I need to switch the wires - is that right?

Does it have a chart next to the Actual pins on t motherboard?

Or does it still only list the same as the manual?

Nothing more specific in the manual (page 1-26 here):

and nothing I could see on the mobo itself, so I found a picture of it and blew it up several times: looks like the +pin may go on the left - but its very blurry? Here’s the picture: 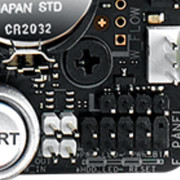 I would agree, put the PLED+ in the top left as you pictured, with the PLED- to the right of that

(angle unclear, but the photo does look like:)
+PLED- PWRBTTN
+HDD_LED- RESET

Thanks, that is what I will do, always good to have a second opinion!

I agree with this analysis.

Does it matter which pin I plug the two into? I assume the worse case would be the LED doesn’t light up and I need to switch the wires - is that right?

Just to answer this; LEDs can be damaged if set into the wrong order. The power and reset buttons simply close a circuit; it doesn’t really matter which one is plus and which one is minus. But LEDs can burn out if you are unlucky.

Most consumer grade electronics have protections against this though, so 99% chance your LEDs will just not turn on if inserted in the wrong order.

This is the sort of PC bullshit that should have been solved 2-3 decades ago with the ATX standard.

There should be a standard front panel connector plug.

Just on that. I’ve seen a friend, back in the early 00s create a short with the jumpers and melt some wires.

Not sure exactly what he did (maybe wired up a LED to reset switch or something like that) but this whole dealing with jumper pins for front panel (along with CMOS reset on some boards) is complete BS.

We’ve got RGB everything, multiple gigabytes per second for storage, and the PC industry can’t get its shit together for a couple of LEDS and switches.

I shouldn’t be surprised, given the efforts of the USB steering committee.

This is the sort of PC bullshit that should have been solved 2-3 decades ago with the ATX standard.

There should be a standard front panel connector plug.

Yeah i agree this still sucks even today.
Asus boards come with a Q-connector which is nice.
But the reason why this still hasn’t been standardized,
is because mobo manufacturers tempt to use different pin layouts,
which i agree is really stupid.

Leds are polarized, so it should be labeled on the motherboard around the fp connector pins.

But the reason why this still hasn’t been standardized,
is because mobo manufacturers tempt to use different pin layouts,
which i agree is really stupid.

There’s no reason for any particular pinout over another; its just something that is left “open” and therefore everybody does their own thing.

Would even be a start if each mobo vendor had their own standard, but even that isn’t the case (AFAIK).

No you wont burn out a LED if you connect it backwards within its working voltage. Most often the rated reverse voltage are double or higher than the rated forward voltage.
Also most LED drivers are current limited so it’s even safer.
So if the voltage and current are safe for normal forward connection it will also be safe for backward connection.

For example. A normal 5mm red led has a forward voltage of 2.5V and a reverse voltage of 5V.
So as long as the voltage is under 5V nothing at all will happen if you reverse the LED because no current is flowing. But you will not ever put that LED in a circuit that can give much more than 2.5V.

Cranking the current higher makes the LED shine brighter and run hotter until it fails so most often we use a current limiting resistor or another type of current limiting design to not risk overdriving the LED. This would also protect the LED in the reverse direction.

So the conclusion is, if the LED is running fine in forward direction it will also not be damaged in the reverse direction unless you design for a freak accident.
//Electrical Engineer

So the conclusion is, if the LED is running fine in forward direction it will also not be damaged in the reverse direction unless you design for a freak accident.

Yes, like a power surge which could easily happen in any modern motherboard. This is why most case manufacturers include a $0.01 capacitor and a $0.01 diode to prevent back current ever even becoming a problem.

However, if the motherboard and/or case and/or PSU is poorly designed, then yes, the LED can break in the wrong orientation. I have seen it happen first hand.

Lol. Whenever “if anything is poorly designed” crops up in PCs you can bet that 3/4 of the consumer garbage does it.

Do you think we will even settle on an open source RGB hardware / software interface. What hope do switchs and leds have

If that is so that equipment shouldn’t be used at all. If a simple LED driver is that poorly designed i don’t have much hope for the rest of the design.

Probobly not. Several manufacturers have tried to streamline it but it never sticks with the other manufacturers. If an open standard become popular then manufacturers will switch but no one will be the first to try because they want their own standard to be the leading one.

Do you think we will even settle on an open source RGB hardware / software interface.

Kinda going offtopic now, but that all depends on:

a) How stupid greedy corporations are (See: Proprietary Nvidia technologies like GSync and DLSS vs “Open” AMD technologies like FreeSync and FSR)
b) How much interest there is to create a common standard
c) How much a single vendor dominates that particular hardware space

If the market is flooded with a dozen different competing RGB technologies, then yes, everyone will suffer. But eventually, the dust settles and a single RGB standard will show up. I hope that standard will be open but I’m not holding my breath.

Also, they won’t bother changing unless there is demand; they will just perpetuate the norm