AMD vs. INTEL (NO WARS; JUST A SIMPLE QUESTION)

I know. The debate for AMD vs. Intel is bound to show up. I do not need that. All I need is you, the fellow reader's opinion, about why I hear Intel is good for work and productivity and AMD is mainly good for gaming. New to forum so hi there. I know this is not the right place. I am sure there is a welcome topic of some sort. Just wanted to ask this question to get a better perspective.

I thank you for your replies and your time. Have a wonderful day. AND no fighting.

eeh? Isn't it the other way around?

AMD is good for work stuff, as those do not require a lot of single thread power; and most are optimized to work on many cores.

Intel is good for gaming as it stands. PPL won't fight about that.

Intel is good for work and productivity

Per core performance can help a lot in certain, single threaded, CPU intensive applications. Saying that, having more cores, which an AMD CPU can provide, can help a lot more with multitasking.

AMD is mainly good for gaming

Value for money, mainly. There are certain situations where Intel performs better because of bad multi core optimisation.

Oh really? Kept hearing otherwise. Thanks for that. and I did that out of precaution because I keep hearing at any point of time, there can be a fanboy somewhere. I guess not here, I am assuming. Again thank you. 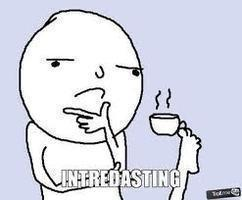 Good to know, thanks. And I mean that sincerely. Pic was for humor.

I like AMD because you get a powerful experience without selling your kidney's or First born child.

Amd right now is using server focused chips on the mainstream, tons of small cores with low IPC(Instructions per cycle) which are great because they are space efficient, which means they don't need as much silicon.

Intel uses fewer but larger cores, which are great with programs that cannot use as many cores as AMD has.
Some games might only use 4 cores, so with AMD 8 core you're only getting 50% of your CPU power, whilst with a intel 4 core you're getting 100% of that power.
Even if 8 AMD cores = 4 intel cores in terms of performance, you usually can't use all 8 cores on AMD.

AMD is also cheaper, and better suited for none gaming related task that can use many threads, like video editing or rendering.

Even if 8 AMD cores = 4 intel cores in terms of performance, you usually can't use all 8 cores on AMD.

I'm going to throw all of you a curve ball of sorts, here's a pic of my core utilization and this is a AMD 8370 all the cores are being utilized.....here's the twist....this is Linux running Windows 7 in a KVM, the utilization being shown is while playing Borderlands 2 in Windows running on top of Linux. 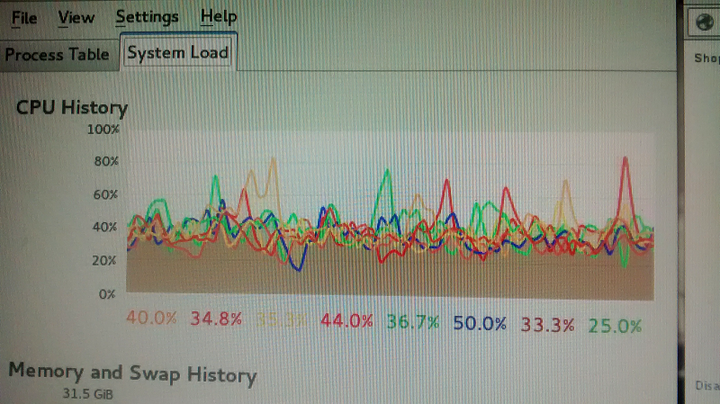 In this configuration I'm using Linux gets 2 of the CPU cores and Windows gets 6 of the CPU cores....this is a situation where the more cores the better because every core of a CPU can be allocated for a given task so to speak, and in my opinion this is where AMD processors really shine giving the most bang for the buck, granted an Intel CPU with the same number of cores and hyper threading would offer even more available power...but at what cost?

Finally, IPC and single thread performance are very important to main stream applications, because programmers are so efficient program for it. (Note, I carefully put a positive spin on the software developers, but I think they are just lazy and cheap.) An i3, i5, and i7 from pretty much any generation can easily top an FX 8350. Because an i5 is a balance between an i3 and i7, it's usually the one picked for gaming.

That's my 2 cents on the issue.

It is actually the other way around. AMD is better for productivity for the same price range. The FX that have more cores and thus work better for multi-threaded applications. So heavy workloads, Rendering, virtualization or applications that support multi-core execution work better.

On the other hand Intel has better single core performance with less cores. Thus applications that only use 1-2 threads/cores run faster on Intel CPUs. Most games, for now, are such applications, thus, run better on Intel processors. Of course it also depends on the game. Some games are GPU bound (and there you would not notice a difference), in others the CPU is more important (where Intel will perform better).

This again is for the same price range. Intel actually has the fastest CPUs. The X99 8-cores are 2 times faster that anything in the market...At the same time though they cost 3-5 times more.

Personally I use an FX8350 that is a workhorse. It is great for productivity and works fine for gaming. But i use my PC for more stuff than just games. A strictly gaming rig might be better with an i5 of the same price.

Makes perfect sense. Yours is not a case of running an application natively. It a virtualization case. You are running a lot of things in parallel. There the extra cores of an FX shine....

that is typically things like, CAD, Graphics Rendering, Virtualization, and most other high computational tasks..

if your NOT doing CAD, grpahic design, 3d modelling, virtualization, then intel is a better choice
(thinking price to performance, as said above you want an i5.)

if you ARE doing any of the above, then go AMD. (unless you have oodles of cash and can afford a 12 core xeon.. in that case intel win again, but price wise, amd win)

Agreed.....when I looked at the cost of a 8 core Intel CPU and the associated parts to run the CPU the cost was more than I have in my entire setup ie CPU, RAM, MB, CPU cooler...there would have been a performance gain using Intel over AMD as there always is (in most cases) but the cost was totally unnecessary for my application/usage....and it was still a 140w CPU.

and do you do any of the tasks i mentioned the AMD performing better at??

I believe what you are seeing is the per-core performance along with hyper threading, the 4790k is a quad core so with hyper threading you essentially have 12 processes (4 cores + 2 hyper threads per core) that can be processed per clock tick...so depending on what your running software-wise you should see a performance gain over a 8350, then combine that with the fact that the 4790 is a 4gig CPU that will easily reach 4.5 gig your per-clock cycle-per-core performance should be much better especially running applications that are optimized on a single/dual core/thread which most applications/games are.

No i just reply to feel a part of this community...

Yes I do some graphic design and visualization on this machine. Cad I don't do, not since like 2008. 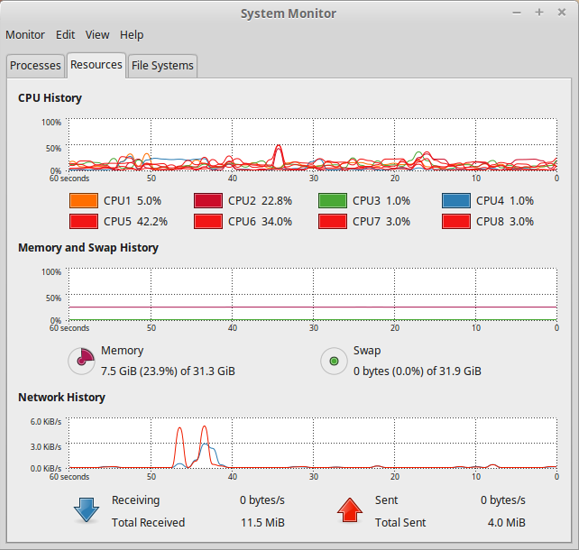 This is a bit of maintenance of a SQL Server 2000 + VB6 application. Pretty weird you might think, but I'm being paid to do this!

The question here is performance and when it is enough or where there is a noticeable difference between two similar CPUs by different manufactures, kind of a apples to apples comparison. In my mind it's a difficult comparison to make because while both are x86 compatible processors the way instructions and tasks are handled is different in each architecture.

I'm not a fanboy of either because over the years I have always chosen what CPU would do the task I required for the least amount of money yet provide acceptable performance in my world, so when I wanted to play with over clocking I bought a 2500k, but when I wanted to build a machine for virtualization I bought a 8370 (could have used any of the 8300 series CPUs).

To me there is more to the equation then raw performance per-clock tic, to me it's the cost plus performance plus what is a acceptable level of performance that I can live with and be happy, if I would have spent $1000 on a 8 core Intel CPU and all the necessary X99 bits to make it work I'm very sure it would have provided a performance gain over the 8370, just the hyper threading alone would have been a big boost in performance but the cost to performance ratio didn't fit for me, not that I couldn't financially do it but my personality would not allow me to basically throw money at something that didn't need money thrown at to attain a acceptable level of performance that will allow me to work and play on the computer with no issues.

To me and this is purely my opinion modern CPUs are too powerful for the software we are running in the first place, if you could watch per-core utilization in real time I think you would see that a less powerful CPU works just about as well as high-end CPU, it's just a matter for how quickly the CPU can perform the task given to it a difference of several nano seconds isn't going to be noticeable to the end user but will show up in benchmarks.

If the CPU was the only issue in PC performance then threads like this would carry a lot of weight but the problem is that while the CPU is the heart of the system too many other things from hardware to software have a larger effect on the overall performance and all it needs is one piece that isn't optimized perfectly (take Windows for example) and you'll take a hit in overall performance making that shiny expensive CPU a moot point.

Of course this is just my opinion.

Jokes aside, get what you want with the money you have. And do your freaking research, this isn't directed at anyone in particular, but the amount of misconceptions/misinformation that just floats around due to improper research and the extreme marketing done by companies is just silly. All this does is create a bias towards one group for no real reason besides sheep following rich sheep.