Hello all, been lurking a while as I’ve been fairly busy.

BLUF- What AMD GPU manufacturers to AVOID or try to get?
- Anyone’s input on AMD features such as AMD Infinity Cache, AMD Smart Access
Memory or other AMD Features.
-I have a 3900XT, upgrade to a 5000 series worth it for a ALL AMD system built ONLY
for gaming? If so, just go 5600x, 5800x or 5800X3D? I say 5800X3D because I plan a
entire AMD system and hope to get the most out of the features listed above.

So, in more detail…

I am getting ready to buy my first AMD GPU (waiting for 7000 series)… I’ve been team green for ages and I am making an ENTIRE AMD system. I am looking for more information on manufacturers of aftermarket cards/AMD cards to see if there are manufacturers to avoid or try to buy that are worth it. I have been a MSI shill for ages and I have a MSI 2080ti I love (was a sea hawk, but I ditched the AIO and went back to a custom loop because the cooler was cheap and no longer made by Corsair like the 1070 I had prior). So I’m leaning that direction, but I have never owned a NON-aftermarket card. So I was hoping to get some input from people with AMD experience.

Especially if you have a AMD processor as well as a AMD GPU to see how you like AMDs features such as AMD Infinity Cache and AMD Smart Access Memory. I’ve read all the white sheets and it all looks good on paper, but I want to see real live experience’s of people.

Because of these features I was considering a upgrade on my CPU from the Ryzen 9 3900XT to a 5000 series. The issue I am having is I don’t want to limit the effects of Infinity Cache and Smart Access Memory by going with a 5600X or 5800X which limits the L3 cache by half… I am considering the 5800X3D because it has 1/3 more L3 cache than my 3900XT. I don’t know if 5000 series utilizes this feature better due to the new architecture (which while more performant isn’t really all that different from what I’ve seen) or not.

So basically, I’m looking from a more technical perspective BUT also experience would be great to hear from anyone.

YES, I should have waited for the new socket, but I plan to keep the X570 Unify board for a while yet. Least a few years. I know AMD has been much better, but I remember a lot of the newer things they came out with had driver issues and you had to constantly update to fix issues… I still have that fear…lol 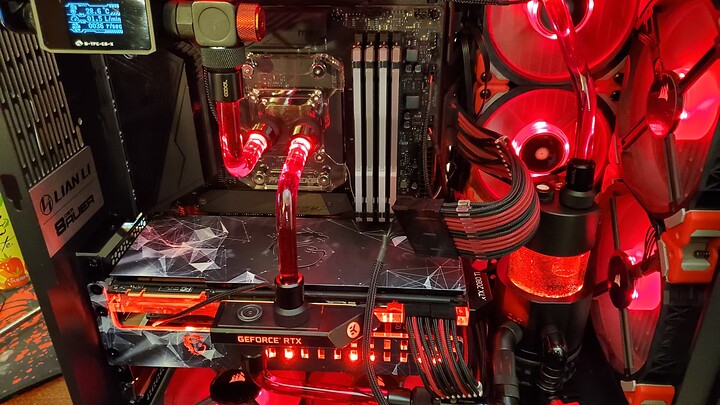 I’ve mostly looked for sapphire AMD gpus.
After Wendell did the interview with Ed.

I’ve owned an AMD brand, sapphire, and now an xfx.

No complaints about any.

Well kind of a mute point on the processor, seems they all lost their deep discounts…boo

The best amd cpu for gaming in particular is the 5800X3D.
And coming from a 3000 series cpu with an eye on a new gpu as well,
i would say it’s probably worth it.
At least based on the reviews we have seen from the 5800X3D,
in modern games around the board.

The 5800X3D is not overclock able but that doesn’t matter.

Yeah, Ive seen the same things… aparently there is a beta bios for my msi x570 unify that allows for some pbo or oc functionality… so I have read at least…

Sapphire, PowerColor and XFX (try saying XFX RX6600 XT) are usually pretty good AIB partners. I don’t remember ever seeing Radeon GPUs made by motherboard manufacturers other than Asus and now recently Asrock, but I believe both Gigabyte and MSI make AMD GPUs.

My first choice would be Sapphire, PowerColor and XFX though and in my recent trip to Micro Center, I got a PowerColor 6600 XT Fighter and RX6400. The Red Devil and Liquid Devil are their high-end models, kind of like the Aorus or ROG branding.

Yeah i was eyeing the Liquid devil 6950xt, but holding out for next gen… i still only see a 20-28% uplift in performance from my 2080ti…not that thats minor, but ive waited this long why not wait a few more months.

For AMD GPUs I have used Sapphire for 3 different generations and they have been absolutely phenomenal for quality, stability and performance. My HD 7850 OC from 2012 still works, for what that’s worth.

For a gaming CPU, it is hands down the 5800X3D. Most games will utilize the cache, but there are certain games that don’t really care about it. Gamers Nexus’ review of the CPU should give a decent idea on the types of games that won’t benefit.

For RAM, if going with a 5000 series CPU, you will get better performance in most cases from 4 DIMMs instead of 2. 5000 loves all those slots populated. Gamers Nexus has a video on that as well.

As for Infinity Cache and SAM (it’s just ReBAR), I don’t currently have an AMD card in my system, but from what I’ve seen they work as intended. Resizable BAR in general will sometimes have a negative impact, but it’s usually quite negligible.

All that being said, the 3900XT is still perfectly fine for gaming, but if you’re wanting to build a long term gaming rig, grab the 5800X3D and sell/reuse the 3900XT.

Although the X3D is better for gaming in a lot of cases, sometimes it’s slightly worse. And it certainly is worse for anything else. You can get a 5900x that is cheaper or a 5950x that came down in price by quite a bit and there is only a difference of 100$ in price with 5800x3d vs. 5950x.

5000 loves all those slots populated.

No it doesn’t. With 2DPC configuration, you drop down to 2933MT/s with single-rank and 2667MT/s on dual rank modules. So expect lower average memory speeds and more technical overclocks with 4x DIMM configuration. 2DPC is always worse. 2x dual rank DIMM is much easier on the controller, but only gets you 64GB max.

About Radeon 7000 series. I heard AMD may be using x8 PCIe 5.0 cards, so this may be suboptimal for running in a 4.0 x16 slot, but is very nice indeed for upcoming AM5 boards. And release schedule according to rumors state that the lower end cards will be released first and 7800/7900 cards in the beginning of 2023. You can probably can get AM5+ 7600 series Radeon in october.

While it is a limited batch of testing, it’s enough to extrapolate.

Thanks all, I know there will be conflicting opinions on some things.

Thanks for sharing all

While it is a limited batch of testing, it’s enough to extrapolate.

Except it isn’t. They didn’t test “4 DIMMs”, they tested 4x8GB 1R DIMMs. Grab 4x32GB DIMMs (all dual-rank) and show me equal or higher performance than 2x1R or 2x2R memory. That GN test is the prime example of drawing conclusions on a too limited amount of data. It is now known that you get all the benefits with 2x2R memory (because Ryzen seems to like having 4 ranks in total) but going 2DPC just makes it worse, as we can’t use RDIMMS on Ryzen and the memory controller is kinda crap when it comes to handling above average capacity with more than 2 DIMMs (even AMD states this)

OP has 4x8GB single rank DIMMs already that they have stated they want to carry over.

The tighter timings on the Corsair kit should yield better frame times in games.