Hey guys! I was looking on newegg today and saw that the new a10 processor was available for around $130. I've been interested in getting into pc gaming, but decent performance seemed out of reach until now. Space would be an issue for me, as I have a small desk, so a Mini atx or micro itx build would be best. Could someone give me suggestions for a compact trinity based desktop build?

http://www.youtube.com/watch?v=CUy6TxeRgwc&feature=g-u-u you have to email them to buy if you live in the us

do u want to build it yourself or have a company do it, also:

I'd like to spend no more than around $500 US, and I would prefer to build it myself.

This computer looks pretty great, have you used one?

Trinitys Apu will not compete with a discrete 7770Ghz eddition

Could this fit in a smaller case, such as a Fractal Core 1000?

gah forgot about that, Fixed see above

What kind of game performance could this build get?

Take a look at this thread, the system is a year and a half old and would be better to go for a Trinity chip over the Llano in this system. Reason I mention it is because its one of the smallest computers you can build. So if size is really a big factor, its something worth considering (Note: the CM Elite 100 may be discontinued or just difficult to find, not sure).

Here is a picture of it with its current setup (small desk with 2 screens): 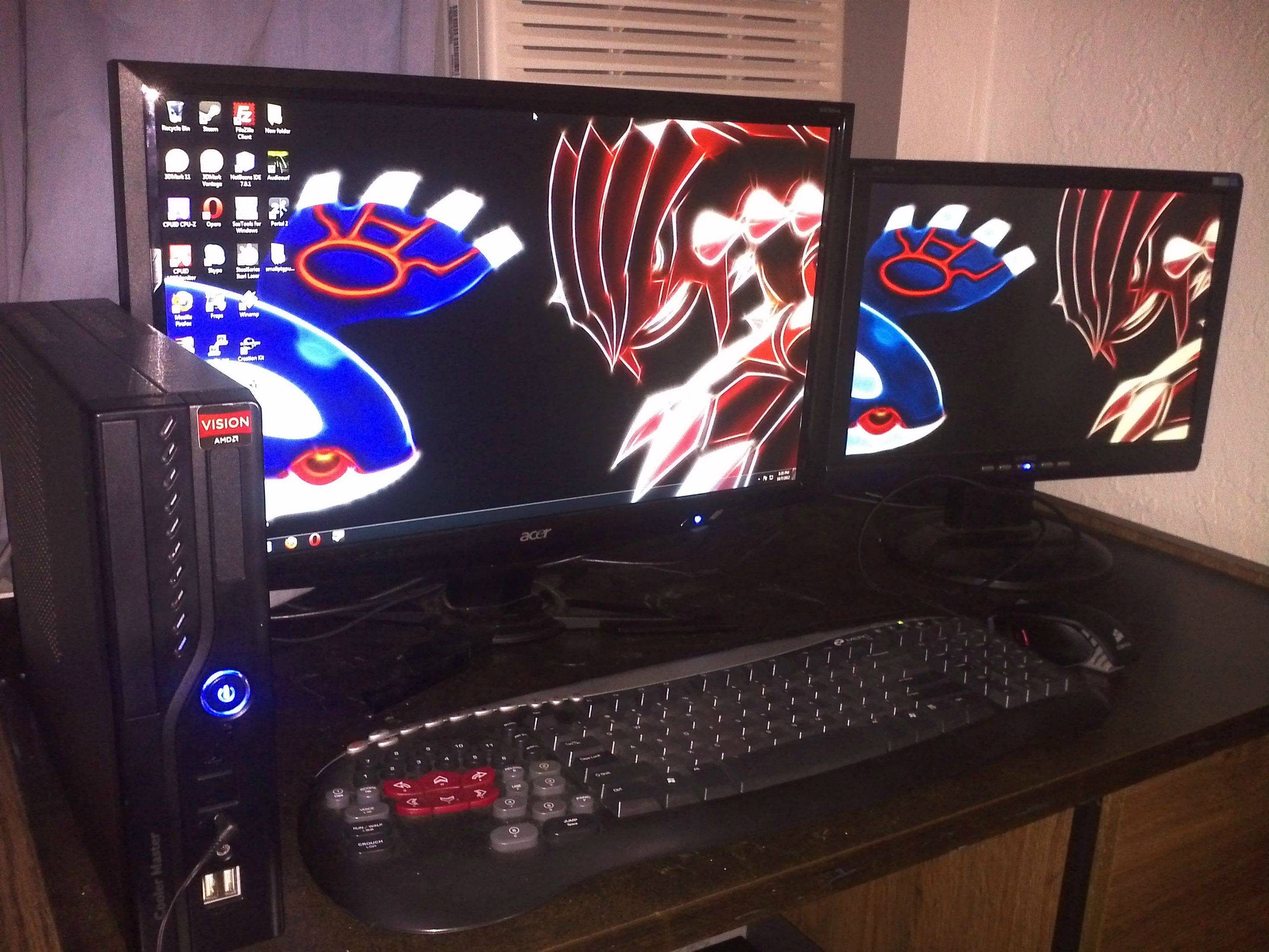 Its also handy if you need to transport it often, we use this as a testing plaform so it often moves between houses and the office.

also I WANT THAT WALLPAPER!

ya go with the apu and buy an A10 and a HD 7650 (low profile if your going with a slim cass) and ZAM you can throw it in an slim case and buy an good quality power supply to replace the one that comes with your case. You can oc an a10-5xxxk? and you can only kind of oc the before stated i3. I would suggest a bitfinix micro atx cass like bitfenix survivor

Trinity's benchmarks should be a fair bit better than the one that Llano system is capable of. That said, still won't beat the HD 7770 in raw power, but they are very different price brackets. But in a system that size, there is no room for a graphics card of any kind, or any expansion slots for that matter.

the GPU would be the limiting factor not the CPU, and a 7770 would outperform a dual graphics trinity, also the CPU performance goes down when you use it and the APU at the same time, so stick with the i3

cool story bro but find me a mini ITX FM2 board

I believe MSI has one in the works, it was shown at some convention I cannot recall. All the same, many slim desktop cases (ones too small to provide space for an expansion slot) actually support microATX, because the PSU actually sits overtop the PCI ports on the micro ATX board. The CM Elite 100 was an example of this.

Since the CM Elite 100 disappeared, perhaps you could try the inWin BL641S.300TBL, though to be honest, I have no idea how good the case or PSU in this is.

EDIT: Upon closer examination, it seems they have managed to fit in room for expansion slots, so that is something to consider. But when it comes to Dual Graphics, the numbers don't look so good, the performance of dual graphics isn't that amazing when compared to the graphics card by itself. Though, as giga has lead me to discover, the A10-5800k performs very close to the i3 offerings at the same price, yet has much greater OC potential. So you should be able to OC an A10-5800K's CPU to or beyond the performance of the similarily priced i3s, but naturally at the cost of power efficiency. Buuut if your hydro is included with your rent, then thats not really a consideration ;)

Uh, I don't really get what you're saying here, some context?