I have just upgrade my old 6970 to a 290x Great! however I have a massive problem ever time I try to install the driver I get a BSOD every time I reboot in to windows. (windows 7 64 bit) I have used DDU to uninstall the driver & reinstall taken my 6970 in all worked fine. Put 290x worked great much better Frame rates. Then turned on this morning BSOD any idea's before I end up going Green Team please. Tried installing 16.6.2 Hotfix and 16.3.2

What AIB of 290x, and is it first hand or second hand? What connection are you using DVI or Display port?

When it blue screens what error code does it give you?

It is a Second hand card but I saw it run before purchase. I have had it running with no problem what so ever. so from a hardware point for view I believe it to be fine! its a Sapphire Card

Well, I have a R9 290x too but I don't have BSOD with the same drivers, so my instinct says its a 2nd handling issue.

Gives us the error code you see in the blue screen. Also, have you tried OC'ing it? If so, try booting the card in its stock clock state with what ever overclocking software you're using (Trixx or Afterburner).

this what I have copy & pasted

A problem has been detected and Windows has been shut down to prevent damage
to your computer.

The problem seems to be caused by the following file: dxgkrnl.sys

If this is the first time you've seen this stop error screen,
restart your computer. If this screen appears again, follow
these steps:

If problems continue, disable or remove any newly installed hardware
or software. Disable BIOS memory options such as caching or shadowing.
If you need to use safe mode to remove or disable components, restart
your computer, press F8 to select Advanced Startup Options, and then
select Safe Mode.

Try using this application to remove the driver.

Then try reinstalling it. There's probably some left over stuff from an old driver messing with the new one.

What bios does your card have?

Similar thing happened for me after crashing overclock, so maybe its relevant or not.

I let the PC just crash horribly and loading Windows had that thread stuck message among with other things and it took several reboots to clear them out. Anyways it didint happen once I hit reboot as soon as driver crashed.

So, dont know why yours is doing that but it should go away if you just keep on restarting, and maybe next time you conclude what was it that fucks up some memory. Like, you turn PC off just after playing that one game and next day its that same drill? :D

AMD drivers can be a pain to get rid of, doing the following will allow you to do a real clean install. don't skip any steps.

1) is it new gpu? (doubt - most likely used?)
2) is it overclocked?
3) have you checked if memory is damaged? early 290x were suffering from bad memory.

I am not sure how could I find out

It is a used card but was seen running before I bought it. we I did have it running was @ 1030Mhz which is standard for this version of card. would you know a way could test the memory with it being installed as it just running as a standard VGA device ?

Right now I have tried your steps not blue screening now but we I log in to windows it blacks out and reboots. Not sure if it progress our not! might become an expensive coaster at the moment

there's software called 'video memory stress test' get it and test your vram.

also what kind of temps are you getting. What is memory clock?
what brand of gpu, is this reference or?

(just so you know its unlikely due to drivers - more likely the gpu/vram is damaged.)
Check for bulged caps anyway.

You should be looking for similar views on your pcb - those are not the same, but you should look for bad caps like you see below. 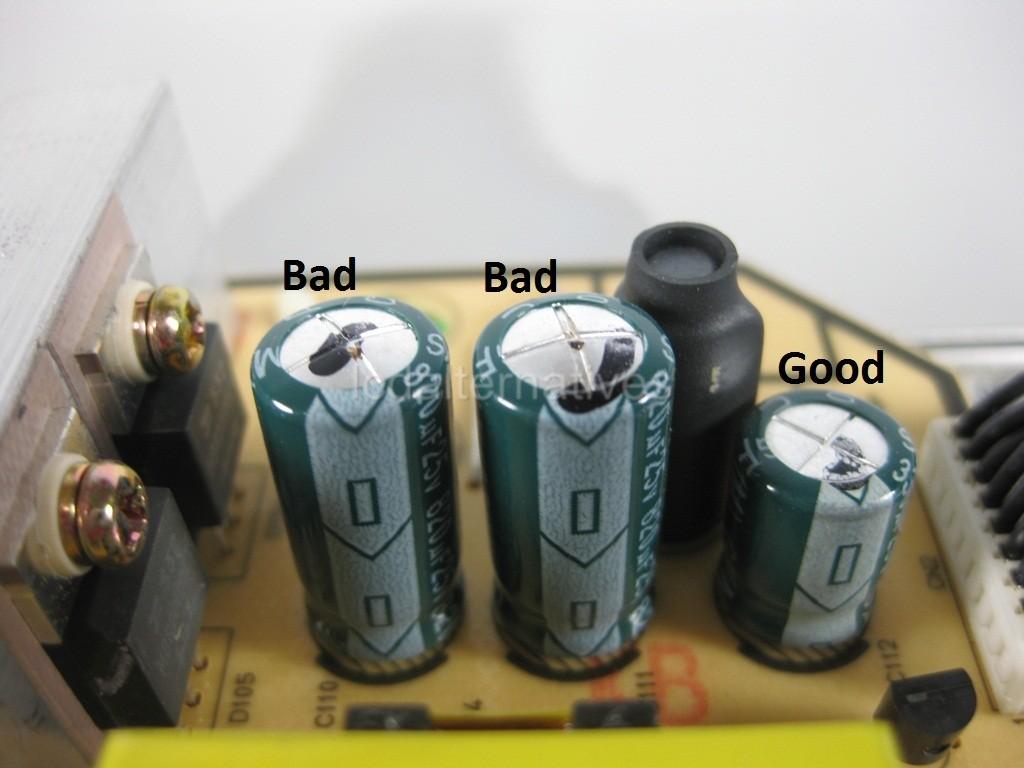 Note: If card is still on warranty don't both checking anything. RMA.
If RMA has ended, be prepared to reapply thermal compound after taking off cooling block from it.
If you bought card from ebay within last 7-14 days you may open case and return it and get full refund.
If anything failed and there no faulty caps, you may try cooking your card -- if issue is bad vram this won't help. (but still worth a shot)

Ok, have you tried the last Catalyst driver that was released....

Also what PSU are you using, and how many amps is it rated for on the 12v rail, The 290x is know for sucking power.

Another thing to try would be boot into safe mode and run sfc /scannow, it could a windows system file is broken.

I am not sure how could I find out

Remember to select the reboot into safe mode in DDU. Wagnard also released a new version just the other day. Official download is in his forum:
http://www.wagnardmobile.com/forums/viewtopic.php?f=5&t=276&sid=a373abd55cfce4820b6e5c5458da2878

In past I did solve 290 doing random blackscreens by updating motherboard bios with USB stick instead from Windows.