hey guys,for some reason my AMD Catalyst 13.4 will crash when im gaming,now the strange part is that it only crashes on some games,Deus Ex Human Revolution is one of them,3 minutes into the game the driver will crash and then recover.strangely enough in games such as War Thunder and CS GO the catalyst driver wont crash no matter what.also here is something that might help diagnosing the cause,for a short period of time i installed a Wireless PCI adapter NIC to my rig,however as soon as i fired my pc up my computer booted to windows worked for a few seconds installed its driver then it froze up to the point that not even my USB devices would work properly (keyboard would start turning its backlight on and off,and my mouse's dpi indicator wouldnt even respond),so i opened my pc and reseated pretty much everything,my gpu and the Wireless NIC,after that my pc would work just fine and both the driver and device manager recognized my Wireless NIC.BTW it worked under windows 7,on windows 8 after installing the driver,updating and restarting,W8 wouldnt even start and startup repair couldnt even find out what was wrong.

so now i dont have the Wireless NIC installed,however its driver is still installed so im going to remove it,however i still dont understand why Catalyst 13.4 will crash only in certain games,also there are two windows updates that wont install and have been corrupted it could also be a HDD Failure but honestly i have no idea whats going on,i tried to schedule a CHKDSK (btw i just remembered that when i first started W7 after the crash on W8,after the first W7 restart in order to install the updates,my pc automatically ran a chkdsk,however when i noticed,it had already finished) however it didn't even start,it gave a message about drive C being clean and thats it. so guys i need your help,i have NO idea whats causing that

I have reason to believe it's your power supply. the symptoms of components not getting power after adding a new component sounds a lot like a faulty power supply. Take a look at the picture of the soldiering on that review of your power supply, that is absolutely atrocious from an electrical engineering standpoint.

This will also explain why your Graphics card stops responding to driver commands after loading it down with a game. You are seeing a lack of electrical current to your PCI-E connections which causes instability within the GPU core.

man that is definately atrocious, im going to test it out with a Corsair 800gs that is being used on my second pc here and see if it will crash. thanks for the research batojiri,i am very pleased with that and i had no idea i had a pretty bad PSU on my main gaming rig

Even if they were using the Soldier for thermal dissipation that is just absolutely ridiculous. There is no need for that much freaking soldier.

batojiri you were right! i swapped my PSU to a Corsair 800GS,played deus ex human revolution for 33 minutes and no crashes! thanks man!

No problem, my experience in Diesel and automotive diagnosis can be applied to PC electronics pretty easily.

Dam thats the worst looking psu i think ive ever seen that has a 80+ cert how did that ever pass certification. 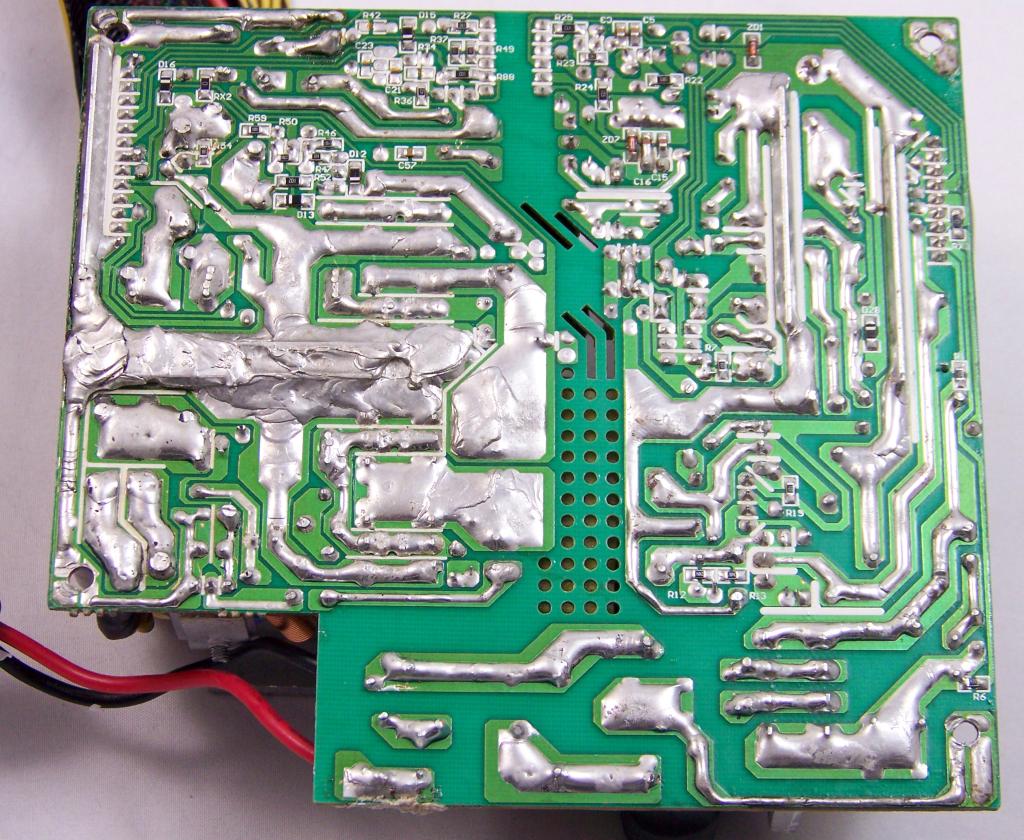 Chinese electrical engineering at its best. They try to produce a product for the lowest cost that technically meets standards.

and the worst part of all is that i paid the same price as a Corsair TX750,this ``thing's`` warranty is a joke 1 year warranty for a PSU should be considered a crime.BTW im thinking of replacing it with a Seasonic X series PSU what do you guys think about? from what i am seeing it seems to be top notch.

Most of what I've seen from Seasonic is pretty well engineered. As far as the statistics of having a bad unit straight out of the box, those are pretty low with Seasonic and generally I see higher MTBFs with Seasonic units.

I have the same problem but i have a GX 650 watt so i doubt that its the power supply, any solutions?

same gpu? i tested a GS800 on my system then played some Deus Ex and STALKER Complete both of them maxed out for 3 hours and no crashes

WAIT! i just remembered that the GX 650w is not a good psu,its made by the geniuses at seventeam and i heard it has a terrible efficiency,also check the amps i know the 7870 requires 30 amps on the 12 volt rail

here in an update,believe-it or not its gotten worse since i bought a new 1080p monitor. its not the power supply i tested both my old PSU and a Corsair TX 750,both psus gave the same result,the game still freezes and the display driver has crashed. im suspecting its either the GPU or the RAM,some guy on steam had the same problem and it was caused by incompatible ram with the motherboard,and interestingly enough i checked my MOBO's compatibility list and the ram model im using isnt there O_o the Corsair Vengeance LP 1600mhz ddr3 model number: CML8GX3M2A1600C9, btw i checked the temps and not one component is passing 80 degrees,honestly im clueless

also im running catalyst 13.9,i even tried a clean install and no luck unfortunately