AMD announced the pricing and availability for Threadripper

AMD today announced the pricing and (approximate) availability for Threadripper [...]

Threadripper processors and motherboards will become available in early August. Dell will be taking pre-orders for its Alienware Area 51 system with Threadripper a little earlier, on July 27. 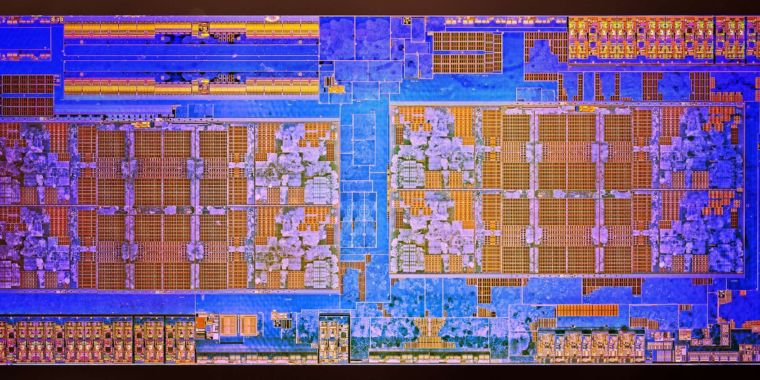 Ryzen 3 specs are also out, though prices haven't yet been finalized.

Expected them to jump over the 1000$ mark with their top end threadripper. Quite surprised it is so "cheap".

Blows Skylake-X away. Sure, Intel has a little better per-core performance and stock clock rate, but for a workstation more cores and more PCIe lanes is probably going to be more important.

Well it is two 8 core chips apart from each other on the PCB substrate. We all ready know Ryzen is fairly good to amazing in comparison with Intel's heat output.

So if they space them well and the heat spreader does its job, which with it soldered on rather than TIM it should, it could be quite reasonable.

EDIT: The power consumption should also be very good, in that it will almost certainly be less than any equivelant Intel part. The EPYC vs Xeon comparison on anandtech showed the 4 chip EPYC to be also very good with power. So their scalability in all things seem to be pretty spot on.

Well the only thing I'd add is that EPYC isn't a great comparison. It's clocked lower and hangs out more in the region where Zen is extremely efficient. I'd imagine power consumption will be higher but certainly less than Intel in all likelihood. Skylake X is wow lol

Here is a quick overview from AMD over basically the same data plus a Cinebench comparison of the Core-i9 10-core against the Threadripper chips.

Thanks for posting this article.
Seems like a list that was leaked earlier at Extreme Tech doesnt seem to be accurate at all.

Damn the threadripper is relatively cheap compared to its intel counterpart. Quite excited for this cpu and will be waiting for build logs

So Intel basically rushed to release their piece of crap so they could at least sell some chips before this behemoth hits the market.

I still feel like this i rubbish Ive searched around its all speculation it seems.. Especially since AMD only announces prices literally 1 day before its up in stores

I´m a bit dissapointed about the pricing on the 12 core sku really.
Of course compaired to intel those prices are still really great.
However wenn looking back at some of the rumored prices on the EPYC chips.
Then this does looks a bit dissapointing atleast for the 12 core.

However wenn looking back at some of the rumored prices on the EPYC chips.

Well epyc is totally different and we need to realize that thread ripper is meant for the work station environment. Its this expensive because not only are people getting far more center die chips they are also coming from wafers that have been chosen as higher quality due to the market segment they belong to. This is also probably the primary cause behind ryzen pro being more expensive.

Also EPYC is a bad comparison for another reason. The chips themselves sit at the smaller core smaller pipeline more efficient side of the architecture then the big burly desktop counter parts. So I can see why AMD is pricing it this way. Heck AMD is already providing an 8 core 16 thread Ryzen chip LOL 12 cores could also be used for other work loads so I still predict the price to be between 550-799 dollars due to the fact that it could also be used in other markets besides people wishing to build insane productivity machines for their consumer use.

AMD may not be as bad when it comes to taking advantage of consumers as intel is but they still ultimately wish to make money after such long years of loss. Sometimes it helps me to think that I paying into part of the next generation of competition to intel LOL

I´m a bit dissapointed about the pricing on the 12 core sku really.

In my opinion it actually fits in really nicely with the other Ryzen chips. It's pretty much in the middle price-wise between the 1800X and the 16-core, add $200 for 4 more cores or save ~$200-300 and get 8 cores (the extra $100 could be accounted for the different platform etc).

In addition to that both TR sku's get 1TB of RAM support in quad-channel configuration and a boatload more PCIe lanes. It's not a straight comparison from the R7 lineup, so I think the pricing is very competitive.

I hope Threadripper will support ECC like Ryzen. And that there will be decent boards that support it too.

if Threadripper does not support ECC ram then it would never sell to the market that it is aimed at. so then like ryzen it will have ECC support by default. i am making a predection for the next gen of Threadripper to come with a ECC HBM2 vega GPU on the same infinity fabric as the CPU. if rumor of how vega is designed is true then we could see a new approach to the CPU market with a truly viable APU. add in the ability to split the GPU up and allow multiple users or instances and we have a market revolution happen almost over night. add in the pin count on the sockets we dont need new sockets just a new board that has video out.

When it comes to ECC RAM, the problem with Ryzen is not so much the CPU, but the motherboards. Not all AM4 boards support ECC-RAM (in ECC-mode), but I hope this changes with Threadripper.

this was also the case with early am3+ boards and the FX line up.

Also the problem is that there is hardly any info out there which boards do support ECC in ECC-mode. @wendell does sometimes mention it, when he reviews them, but I really wish the people who have access to these AM4 boards would test it and publish a list. I mean I don't need a complete list of compatible mobo DIMM combos, but a list of motherboards that worked with a certain set of DIMMs would be amazing.

So far I heard that the Asrock X370 Taichi board supports ECC-mode, but I don't know anything about the Asus Crosshair VI Hero, which is another option I am thinking about for my next build.