Following employee protests at Google and Microsoft over government contracts, workers at Amazon are circulating an internal letter to CEO Jeff Bezos, asking him to stop selling the company’s Rekognition facial recognition software to law enforcement...

“Following employee protests at Google and Microsoft over government contracts, workers at Amazon are circulating an internal letter to CEO Jeff Bezos, asking him to stop selling the company’s Rekognition facial recognition software to law enforcement and to boot the data-mining firm Palantir from its cloud services.

Amazon employees objected to the Trump administration’s “zero-tolerance” policy at the U.S. border, which has resulted in thousands of children being separated from their parents.

“Along with much of the world we watched in horror recently as U.S. authorities tore children away from their parents,” the letter, distributed on a mailing list called ‘we-won’t-build-it,’ states. “In the face of this immoral U.S. policy, and the U.S.’s increasingly inhumane treatment of refugees and immigrants beyond this specific policy, we are deeply concerned that Amazon is implicated, providing infrastructure and services that enable ICE and DHS.”

In May, an investigation by the American Civil Liberties Union revealed that Amazon had heavily marketed its Rekognition software to police departments and government agencies. The technology can recognize and track faces in real time, and the ACLU noted that such a powerful surveillance tool could easily be misused by law enforcement.

“While Mr. Bezos remains silent, Amazon employees are standing up and joining shareholders, civil rights groups, and concerned consumers to call out Amazon’s face surveillance technology for what it is: a unique threat to civil rights and especially to the immigrants and people of color under attack by this administration,” said Nicole Ozer, technology and civil liberties director at the ACLU of California. “We stand in support of these employees’ call on Mr. Bezos to do the right thing. Amazon must stop providing dangerous face surveillance to the government.”

Earlier this week, several Amazon shareholders called on the company to stop selling Rekognition to the police. That backlash has now spread among employees as well.

Facial recognition (along with various OCRs) is one of those ML problems that’s been super well researched.

I wonder who gets to pick up the contract, or if they end up doing it in house in the end?

What does the facial recognition aspect of this story have to do with the border issue? The author seems to deviate from the title very quickly into grand standing and virtue signaling.

The story calls them employees without specifying where the are in the company, labor or management.
Since the warehouse workers are peeing in bottles out of fear of amazon management policies it is reasonable to assume this letter comes from the management. Unless the letter has an odor and yellow stains. 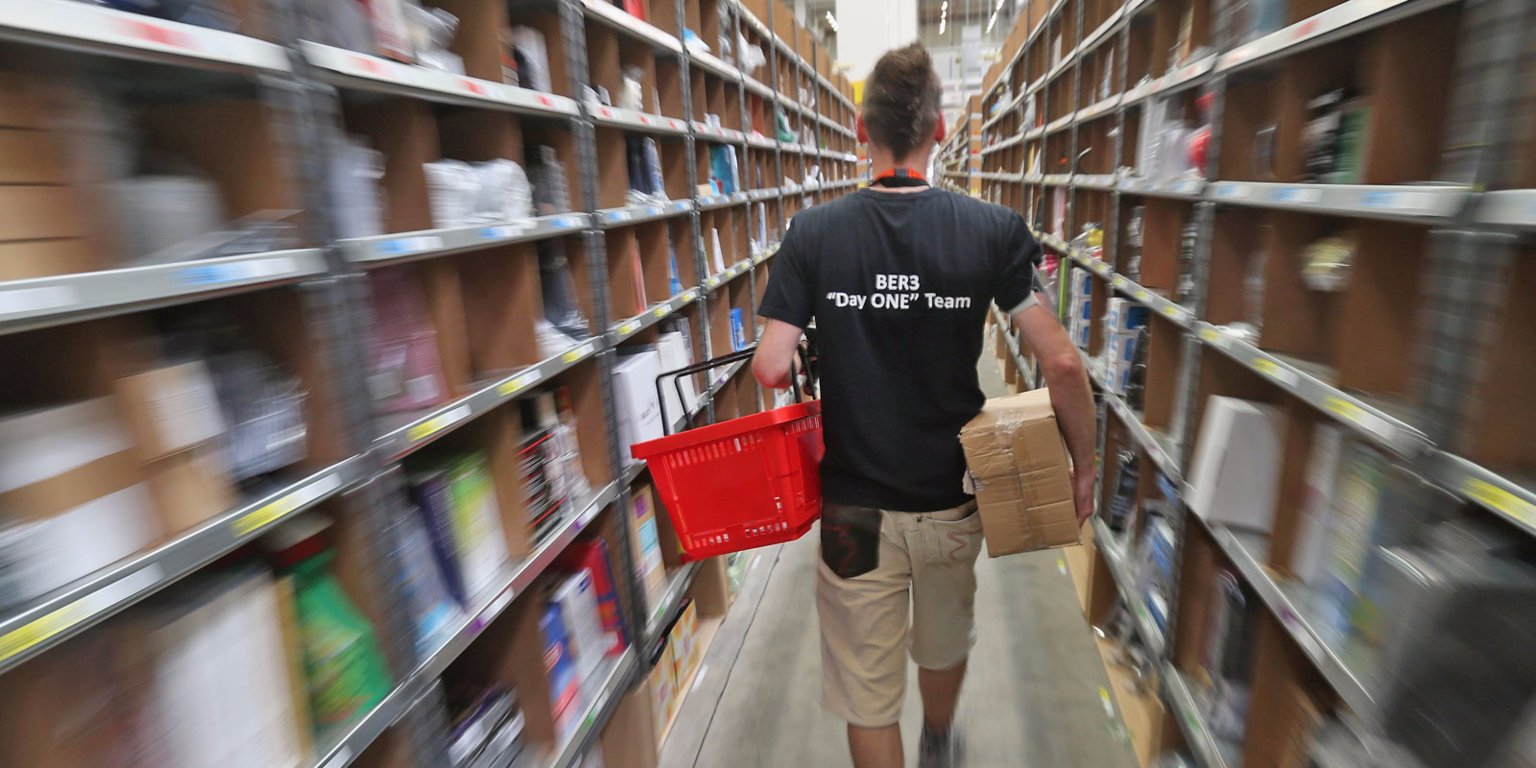 An undercover author and an anonymous survey found that workers believed taking a long break could lead to warnings at an Amazon warehouse.

What does the facial recognition aspect of this story have to do with the border issue?

I mean, it’s quoted from the letter. It’s not editorializing.

regardless, then the letter is doing what I listed

Or we can try and be happy that at least someone at Amazon doesn’t want to enable the police state.

Scary as It may seems the technology is already here. If Amazon isn’t gonna be 1st then someone else will. I think the only way to avoid the whole dystopian world is to have a government to make a law or add a constitution that safe guard personal identity but at this point I really doubt that will ever happen especially in the US.

especially in the US.

Hasn’t this sort of thing been going on in the UK with CCTV for as long as they have managed? At least we haven’t got government-owned cameras everywhere (yet), and if anyone is going to resist it legally I think we can expect that in the US. There are some glimmers of hope: https://krebsonsecurity.com/2018/06/supreme-court-police-need-warrant-for-mobile-location-data/

I guess what I’m trying to say is that If there is anyone that can eliminate the whole dystopian world we’re going to, that would be the US with a good law or constitution but with the whole politics that have been going on in the US these past few years. It might not be possible anymore.

I’m a lot more worried about corporate usage masquerading as customer services. They aren’t constrained by the Constitution in the same way that the government is. Couple that with some handy “cooperation” and we’re in trouble.

But I’m also not into being overly hyperbolic about it. We’ve been doing that for centuries and it just serves to rile people up on separate ends of the political spectrum and we stop talking about the important things and just fight each other. Works out great for the two-party system here. Anyway, getting OT.

Amazon can’t make it though if the people who know how refuse to do so. Neither can another company where other workers are also against it. I think that’s something people are missing if this spreads to other sectors of tech. Which it already has.

Most people don’t want to create a black mirror future so they’re calling on others to refuse to develop it. People seem to forget that Amazon can’t just will this into existence without people willing to make it. Workers in Google and Microsoft have started a similar initiative.

Tech workers have a lot of power that they can draw on by uniting. The government sure won’t stop this if workers can’t put checks and balances on the war machine it’s created because rich companies like Amazon are the ones trying to profit off of that future, so the only way for it to be stopped is for workers to unite not to build it. People’s ideas of power are changing and this is a reflection of that. Especially since it’s the cops and the state who want this type of tech, not the rest of us. So it has to be workers who stop this because no politician will draft a law like that, especially not in this climate

You realize that without those wearhouse workers that Amazon would not be the economic Juggernaut it is right? The management aren’t the ones busting ass, they just enforce the hierarchy and Amazon can get rid of them no problem because they aren’t the ones generating value by getting the packages out. Management has very little power and would quickly be replaced if they were not backed up by the people with actual clout (workers doing the nitty gritty) demanding the same thing.

They can only push people so far before it backfires on them and pissing in bottles is exactly the type of degrading work conditions that breeds Bolsheviks on the shop floor ready for revolution.

That and this is taking place with initiatives lead by other tech workers uniting at Google and Microsoft to reject similar contracts. They hold quite a bit of power, which the Jeff bezos of the world will soon learn if tech workers decide to have more control over the technology they build across the whole sector.

I’d rather have Google provide the technology tbh.

That’s not inherently true and that still doesn’t solve the problem of accountability anyway if Google isn’t being held accountable by its workers. If the government could have done that from the start they would have.

Denying these services the massive infrastructure that Amazon, Microsoft and Google have would also be huge too, especially considering the prevalence of AWS in cloud computing. It would raise the barriers considerably for these types of projects if they don’t have that as an option.

Praise our overlord Based Bezos

The workers don’t want the programs they have written for peaceful purposes be abused for harming humans. They could care less about whether Amazon provides infrastructure to the government. They wouldn’t even know. There’s also plenty of other, smaller cloud providers. And worst case the government can buy their own hardware.

I can understand that people don’t want their programs to be abused, but I don’t think that it actually matters. I also don’t understand how it’s a good idea to weaken your own military.

The workers don’t want the programs they have written for peaceful purposes be abused for harming humans. They could care less about whether Amazon provides infrastructure to the government.

They do when use of their infrastructure is directly tied to that issue. Of course there’s nothing wrong with partnering to use it, it’s how they use it that workers (do) care about

Buying the hardware still requires someone to set it up, so that doesn’t neccesarily circumvent the issue if this picks up enough steam.

Many people who work for these companies are internationally based or immigrants. So in essence some people come from countries that might be the subject of US imperealism and the question becomes why would you want to strengthen the very military of a government that is seen globally as an irresponsible belligerent that could get your family killed.

Not everyone working at these companies benefits from a strong US military so the America first mantra falls on deaf ears, arguably even for those who are US citizens

Because that’s one application that will be immediately relevant to the current administration and drones are already heavily deployed at the border. Not to mention the boundary mixing going on between ICE and the police that is making both institutions combine more of their operations. It’s not hard to imagine this technology being used from hunting down political opponents to identifying what ads to serve to a particular individual, among a plethora of other dystopian developments but that’s a current concern in the here and now.

It has multiple implications and some of us are very concerned about how this will be used to further terrorize the immigrant community because that’s one thing that’s already well underway. That’s why workers want to not be a part of this for the police because it also has other impacts.