AM4 Motherboard recommendation for 2 GPUs with Linux virtualization

Hey,
Im currently planning to buy a new PC and want the run Qubes OS or rather general KVM or Xen with PCIe passthrough for gaming.
I was thinking about getting a Ryzen 5600X and a Raedon 6800XT. Im not really in a rush so I can wait a bit until these components are available.
My biggest question however is what mainboard to get. With virtualitation and PCIe passthrough I want to be able to use 2 GPUs one cheap one for the host where I also connect my two 4K monitors and the 6800XT for passthrough.
This means I need at least 2 16x mechanical PCIe ports. How many electronical lanes would I need for the second graphic card?
I also want to continue using my 10GBit/s NIC which is connected via 4x PCIe 3.0 for connection to my freenas server(which only supports 10Gbit/s not 2.5 or 5Gbit/s). Actually I was thinking why does it need 4 lanes? Wouldnt 2 lanes be enough for 10Gbit/s with 1 3.0 lane having a bandwith of around 1 GB/s?
2 M.2 slots would also be quite nice however this is not extremly important.

X570 is more flexible though. For example the Gigabyte X570 Aorus Pro(230€ in my country) also has 3 x16 Slots but with x16, x8 and x4
This would fit all 3 card withut problems. Only the x16 would be reduced to PCIe 4.0 x8 which would only result in a few % performance according to the benchmarks I found.

There are also Motherboards with 10Gbit/s NICs however these are super expansive.

At the moment I’m leaning towards the X570. Is there anything else I should look for? What would you suggest?

thank you in advance

So what you will find is that while yes, those boards have those pcie lanes, one of the lanes. Is going to be routed through the chipset with all the other devices on the chipset. Unless I am way off, all the chipset pcie connections for the latest ryzens are only x4. So. That could end up being a ton of bottle neck you may not be expecting on 1 gpu for sure and possibly the m.2. I have an Asus ws x570-ace. It gives you dual x8 for 2 gpus and x4 for a single m.2 straight to cpu. Everything else it hypes up about itself gets funneled through the chipset. I think this is the gigabyte you are looking at: 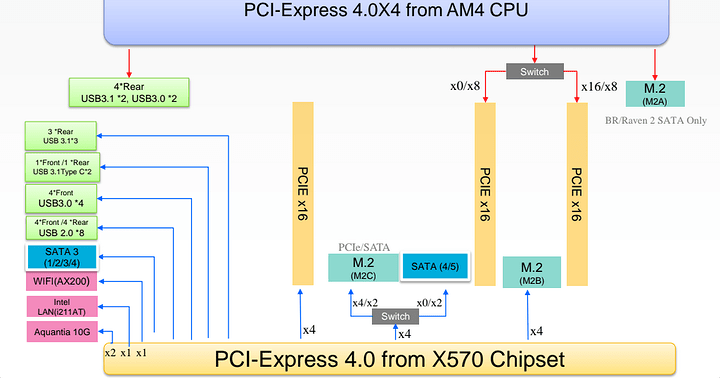 Doesn’t look like gigabyte provides any official for.the public diagrams, so have to dig but that one seems to be accurate as the layout is the same in a few different places.

The bad news is that you will not be able to run 2 x16 slots in any x570 or b550 configuration. For that, you need to run Threadripper.

The good news is, you will lose around 1% of performance if you run in 2x8 mode at this point. So, an X570 should be adequate. A B550 could work as well, but you need to make sure both your GPUs are on the same “side”, either CPU or Chipset. If in doubt, X570 is the way to go here.

That said, in my opinion, one of the best theoretical passthrough ideas is the one with an AMD Ryzen 7 4700G coupled with a discrete GPU. An eight-core APU should allow a 4+4 core split between VM and host, and eight threads should be plenty for most games up to now.

Meanwhile, the APU removes quite a few lane grouping headaches and is even good enough for some 1080p gaming. So, it hits quite a few sweet spots especially considering it’s a GPU AND CPU in one. Only problem? It’s almost impossible to buy the 4700G since it’s not sold to consumers, and the previous design 3400G is only 4 cores… So it remains a theory for now.

Do I really need 8 lanes for my host GPU, though? Its only doing X or Wayland and the main GPU should do a game for example. I have an old 1050 TI here that should work jsut fine for that. I dont think it even needs more than 4 PCIe 3.0 lanes.
Also why would those GPU need to be on either the CPU or the chipset? Im not planning on doing SLI

Do I really need 8 lanes for my host GPU, though? Its only doing X or Wayland and the main GPU should do a game for example. I have an old 1050 TI here that should work jsut fine for that. I dont think it even needs more than 4 PCIe 3.0 lanes.

You do not technically need them, but they do need to be fairly close and you can’t get more close than two bifurbed slots sharing the same lanes.

Also why would those GPU need to be on either the CPU or the chipset? Im not planning on doing SLI

Passthrough is pretty much SLI over PCIe. You’re using your PCIe lanes to route the graphics output to the secondary card. If they are not close, then that will mean a few screen frames of latency which is pretty important in many games and even some professional apps.

Ah ok thats valuable feedback. So Ill try to get a motherboard with switches between the 1st and 2nd pcie x16 slots and run both with x8.
Thats means for B550 theres ASUS ROG Strix B550-E, Gigabyte B550 Vision D and ASRock B550 Taichi. Those start at 220€, so I might just get an X570 at the price. Maybe I’ll use the Aorus Pro X570 or would you suggest something else?
thank you very much so far.

If your doing pass through, I’d highly recommend going with anything gigabyte as the other vendors don’t offer setting which pcie slot gpu you want to boot from, making pass through a bit harder than it should be if it’s your first time setting this up.