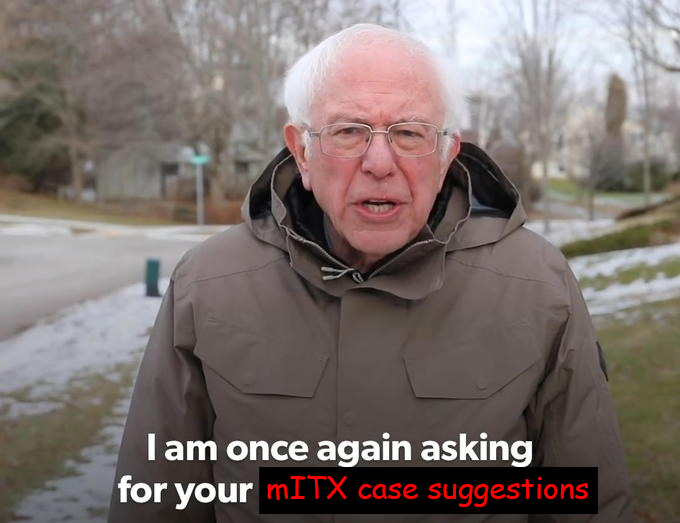 So after upgrading to a 3900x, I have stupid high temps in my Jonsbo U1 Plus (with as many fans as it can physically fit), and I’m looking to move to a case which can accommodate a cooler with more headroom than my NH-U9S.

Ideally, I’m looking for something that can either fit a 280mm AIO, or a 120mm tower cooler. I’m not massively keen on moving away from such a tiny form factor, but it looks like I don’t really have a choice, unless I want to splash out on an Ncase M1 (which are currently out of stock).

The only decent option which isn’t too costly looks like the Define Nano S. If anyone has any other suggestions, it would be greatly appreciated.

You want to keep the case small in general, or is it a small footprint that you are after?

Raijintek Metis Plus looks like something that supports tower coolers. Max cooler height is 160mm

If I’m going bigger, I’d prefer airflow over anything, really. It’ll probably end up going on the floor instead of my desk. Just trying to avoid having a cube.

Raijintek have some interesting ideas, but I’m not really a fan of their design.

Been thinking about it a couple of days, and the Nano S is the only thing really appealing to me, functionally speaking. Would be nice to have something a bit smaller, but it’s in no way a deal breaker.

I joked about the NZXT Manta earlier but it does fit two 280mm rads. It’s the size of an NZXT S340 though and I believe it is discontinued now.

Shipping would prob make that too expensive, NcaseM1 is my vote

Ncase M1 (which are currently out of stock).

Or Coolermaster MsterBox, also about 120€ ish.

Yeah, I want a Sliger case for my system, but it’s way too mush $$$ for me right now.

And my loop is out of commission for the foreseeable future.

Here is The List™ of pretty much every part you can think of for an SFF build, courtesty of smallformfactor.net

Not sure if this helps, but you can try to filter pc cases by motherboard form factor, price, and cpu cooler height, dimensions and other features here: geizhals.eu

Hopefully, you find a case that fits that you can buy (regardless of where you are in the world)

Thanks, @2bitmarksman, @risk, I’ll have a dig through those and see if anything catches my eye.

If only Fractal made a Define Nano S2 with an sfx mount, instead of the Era.

The J-Hack Pure XL might fit your bill. Costs only $140 and if you have no problems with an external brick, it allows 142mm coolers. Even if you want an internal PSU, it is compatible with a Noctua NH-l12s cooler with fan mounted on the bottom.

Of course, it does have a cube layout but that is pretty much unavoidable for any case supporting 110+ coolers - it is simply cheaper and more compatible to have a traditional motherboard layout in that case. Otherwise I’d recommend things like Loque Ghost, Dan A4 or similar - all probably above your price range.

Looks like a step back from what I have now, to be honest. Would probably need a couple of the Dell 330W PSUs if I went down the HDPlex route(?).

The main issue I have is the lack of ventilation turning my case into a hotbox, but even without the side panel on, the NH-U9S can’t keep up with the 3900X at anything over 3.8GHz sustained (that’s with a 90°C throttle temp ceiling set, which it spikes over), which is why I’m veering towards finding something with AIO support.

Does your case have room for a 47mm cooler? Because in that case, the ID-Cooling IS-47k might also be a cheap solution. Not sure if it will fit your motherboard however.

Yes, it does. Current setup for reference. The flipped fans are a recent development, which helped slightly. Top flow coolers kind of get killed in this when the side panel’s on, because they just end up dumping the air into the case, and there isn’t enough airflow to carry it out. 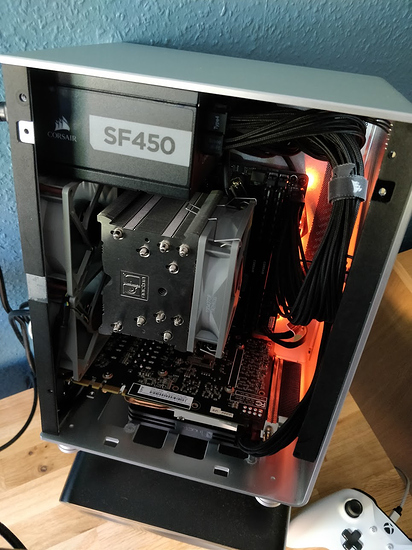 Ah, I see. Hmmm… The main problem I have is cheap, I know a few more expensive cases with AIO support.

So here’s my take on it: the only SFF case I could find on the market for me is the RVZ03. Cooling is very well done, but it really lacks in build quality. It’s pretty difficult to build in, but an SFF PSU and some patience can give you very good results. The included fans are nothing to write home about, but they will do the trick.
I don’t feel like I can fully suggest you to buy it, but if you ONLY care about cooling performance you’ll absolutely like it.

P.S. the ARGB LED on the front is very well diffused and looks very nice.

The Core 500 fits up to 140mm Tower coolers (NH-U14S for reference). I’m even running a non-modular power supply. Assembly works best if you are bilingual because you will be swearing a lot. 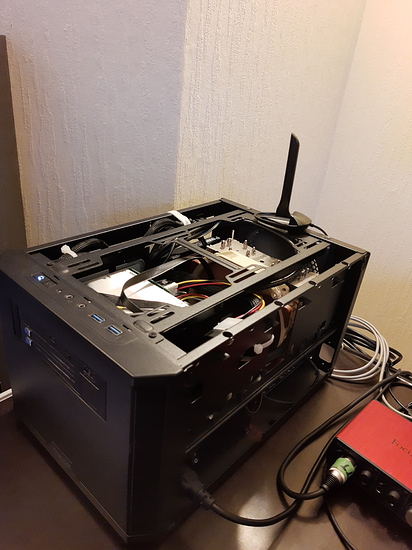 The PSU cable is an oversight by me. The plug in the psu has the wrong orientation so the cable passthrough does not fit. I’ve found a compatible replacement cable that is currently in the mail.

Thanks for the suggestions, everyone. I’ve ended up just going for the Nano S. As nice as other options were, there was nothing else that stood out to me for anywhere near the price, so I’ll just live with having a little tower on the floor.

Still waiting on an eBay £1 selling fees promo to get rid of a load of stuff, so this Jonsbo case will probably be joining them.

Case should arrive tomorrow, with an 8-pin PSU extension (24-pin won’t arrive until Tuesday), and I’m waiting to see if the NF-U12A gets in stock anywhere before getting a new cooler. Tossing up between that and building an alternative to an AIO now (got a little inspired). 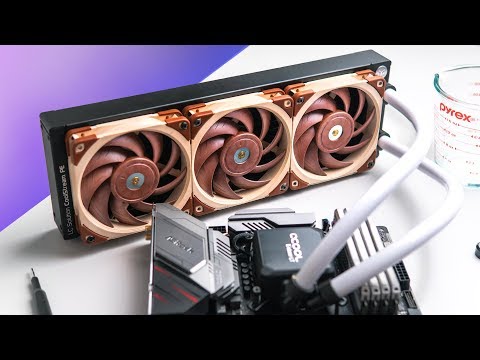 PSU extension cables both won’t be here until Tuesday now (Thanks, Amazon), but just about got the system in, and will be getting a new cooler soon. 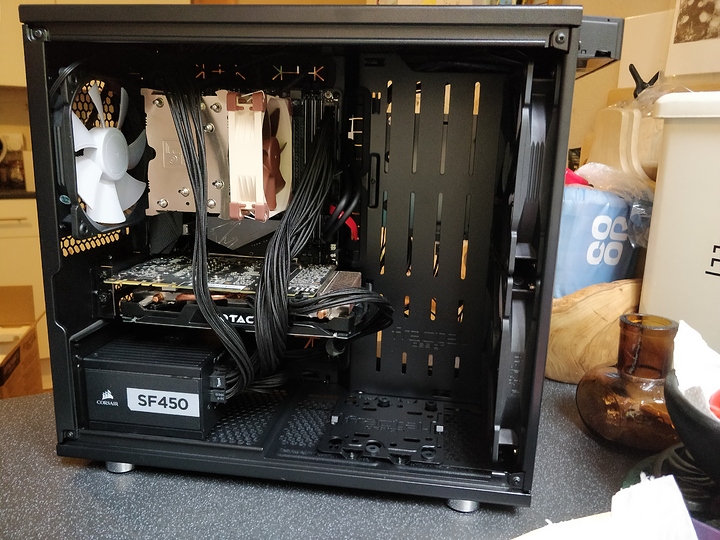 Today in, How Airflow is Important: Having an exhaust fan that can actually move air has meant that my 3900X can boost at full 140W package power for a 3 minute render without hitting 90°C, even with the U9S, and a slower fan profile than in the old case.

I’ll still switch the cooler out, because I do a lot of overnight rendering where it will have the chance to reach toasty equilibrium, but that’s a pretty nice result.