As some of you may know from my other threads, we run a dairy farming operation in Canada, and milk the cows with robots 24/7. Sometimes the power goes out though. We have had a small 25KW generator for years, but you have to hook it up to the tractor and plug it in manually when the power goes out. (which is usually 4am in the middle of an ice storm) so recently we picked up a used automatic 60KW diesel unit. In this thread I’ll document some of the process of getting it installed. It could take over a year from today to get to completion but eventually we should be able to sleep right through a power outage without noticing.

Here’s the generator on the trailer, and in the background the small generator house it came out of at the previous installation. Previous owner was a chicken farmer but has now retired. Chickens require 24/7/365 ventilation and heating in the winter, so you don’t see a chicken farm without a genset. 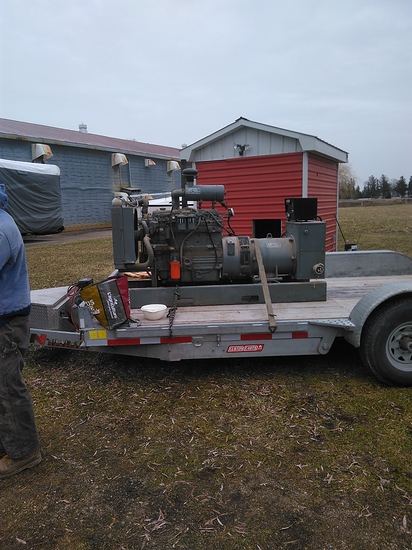 Although it hasn’t run in 7 years, and the previous owner was unable to demonstrate it working, the unit has less than 200 hours of operation so we trusted we could get it going. After changing all the fluids and filters, and replacing the radiator hoses it fired right up. These old (1970s) Perkins engines are pretty reputable and much less complex than a modern one other than the starter motor, there are no electronics whatsoever to fail on the engine.

Here’s the first startup in the shop. Now we have to build our own small generator house and install it within.

Interestingly, since our electricity price varies with time of day and we have a few operations that use heat, it might be worth it for us to switch to generator power during times of high electricity cost if we can also use the heat from the engine to heat buildings or dry grain.
Once we get the generator actually powering something I’ll do the fuel consumption math and figure that out.

Made some minor progress over the last few weeks. Dug up the underground lines by hand so we don’t hit them with the machines while digging to set the concrete pad for the building.

Here you can see our tired and crowded old transformer pole. We have 4 200 amp services coming off the pole, and 2 10KW solar feeds as well. For those curious, the solar panels can provide about 80 amps in full sun, but our operation can require over 200 amps in hot weather with all the fans, milk cooler, and other machines running.
The solar power is sold to the grid at a subsidised price ( I will refrain from political commentary) but we buy pretty much all of it back at regular market rates. The payback time for our solar system was projected at about 8 or 9 years. 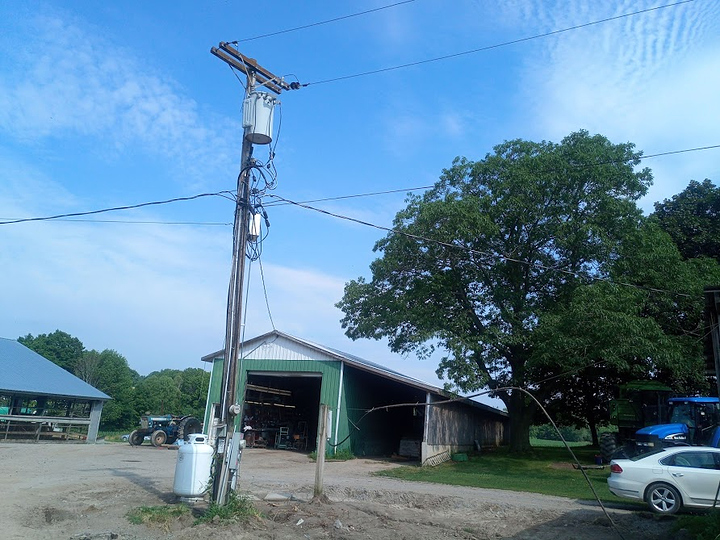 Here you can see the trench a little more clearly, going to the short post on the right. That is one of the solar feeds. Each small post has a meter on it that tracks the solar energy provided to the grid. The main meter for electricity used is on the transformer pole.
For the post on the left we had to lift the wire out of the ground and suspend it from a cable because we will be digging in the spot where the wire used to be. That is solar system 2 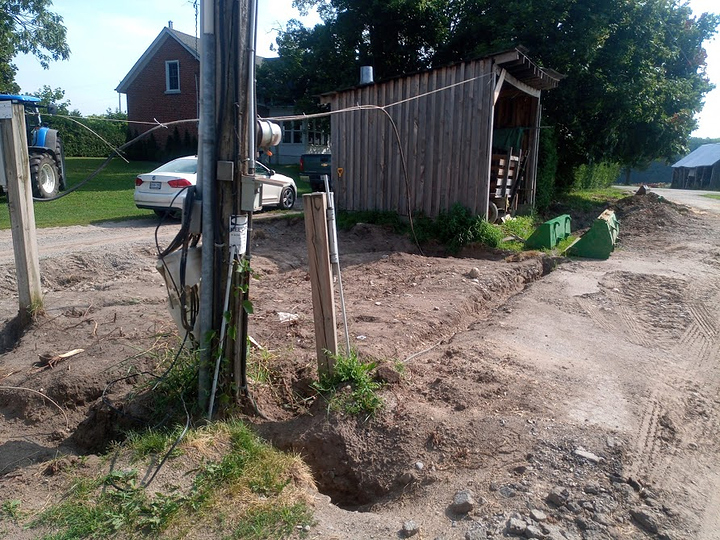 image.jpg892×669 539 KB
That small building is a woodshed. The farm house is heated by an outdoor wood boiler. The generator house will be similar in size, and placed between the woodshed and the pole. Of course with sufficient space between so that if we burn the woodshed down by accident, it doesn’t burn the generator building and all the fuel contained within. That would be a pain.

Once the generator building is up and the generator installed, the pole will be removed, and the HV power lines will be buried as well. Far too many people are killed on farms by hitting power lines. 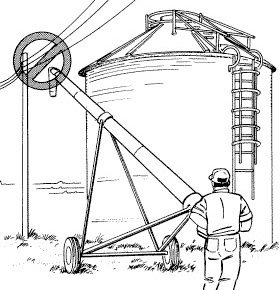 That’s all for now, and likely for a while as we are about to begin wheat harvest. If anyone wants to talk farming related stuff I’ll be checking in from time to time.

Update! Building is proceeding. We built forms and poured concrete ourselves in December, since we had difficulty finding any concrete contractors available. Local guy is building the shed.
Since the last time I posted, we have had one power outage. It lasted for about 5 hours, beginning at 4AM. I believe a tree fell on a line somewhere. It took me about 45 minutes to wrestle with tractors and wires in order to get our old backup generator up and running. Which is not bad considering what had to be done. 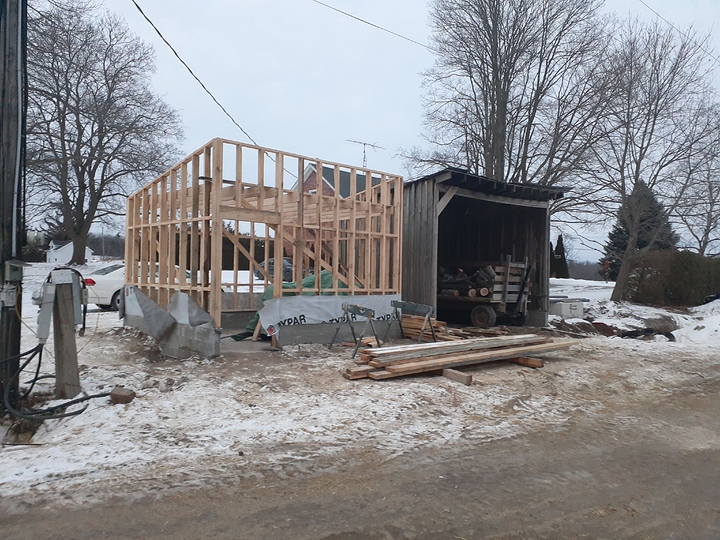 Does anybody know of a 220-240 volt 60hz UPS capable of providing approximately 3Kw/3KVA with a run time of something like 3-5 minutes?

Quick search brought up an APC unit, is only 120V though.
ABB has the PowerValue 11RT 3kVA S which fits your requirements, you will have to contact them for a quote though.

APC is usually my go to brand, they also have a calculator to find what unit would work for your needs.
https://www.apc.com/shop/us/en/tools/ups_selector/

I think this will do what I’m looking for ?

The robots themselves actually draw up to 7Kw if milking. I was thinking maybe I could rewire the vacuum pump motor so that it doesn’t go through the UPS but it looks like that may cause a critical failure if the power goes out. So I’d need at least a 7Kw UPS

It seems to have changed to ~8000 USD on Amazon now, and there is no graph on CamelCamelCamel, so I cannot know for certain; maybe it was a 3rd party seller selling a used one, maybe it actually was a 3rd party new being sold cheap to clear inventory. Other sites too, list MSRP as ~10 000 USD, but I could not tell you if that was ever a reasonable price.

Do you remember if the 1600 USD was a 3rd party or Amazon itself?

Sorry if this is considered thread-necro, but I think it fits better than starting a … “continued” thread,
because the adventures Have continued!

Here is the completed generator building, with propane tank(hot water heater in barn) and diesel tank (for generator and tractor use) 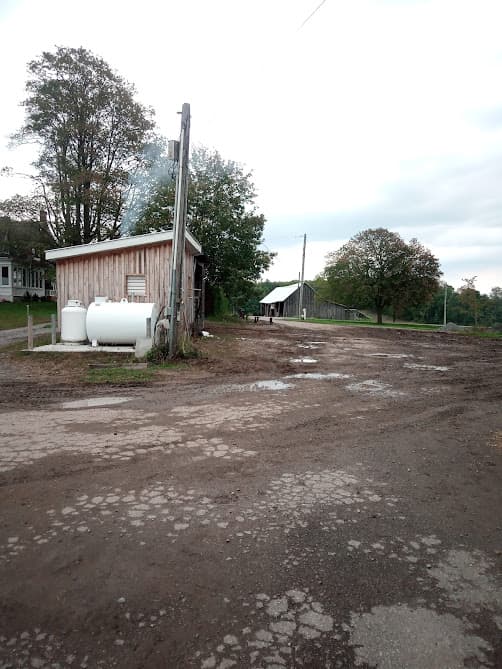 Also you may notice there are no overhead power lines in this photo! all the power lines have been buried. The phone line is still overhead. That is sort of an oversight, sort of a “we didn’t want to deal with Bell, so we left it where it is for now”

We did changeover from overhead to buried power lines in December. Had to get real electricians for that

And now the inside of the room. 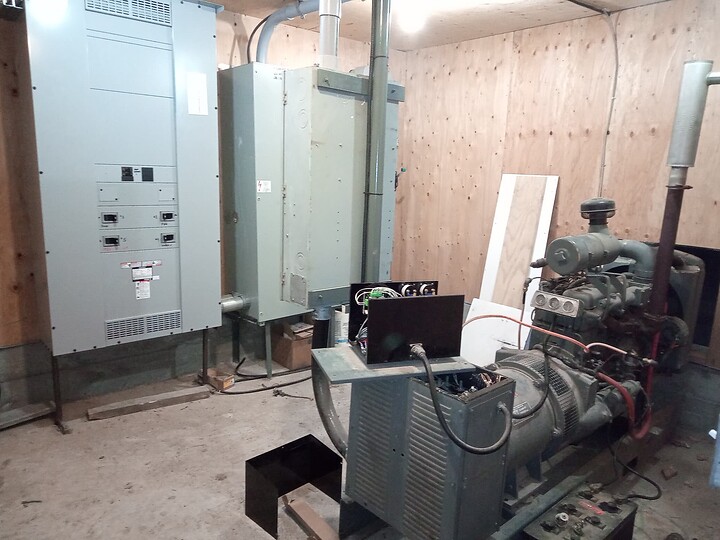 There’s a lotta big boxes and many switches. 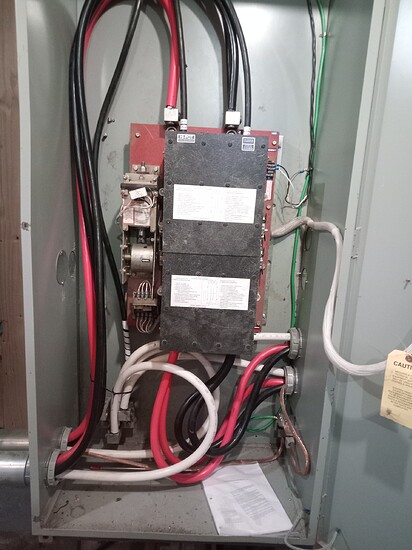 IMG_20210927_185526_7271920×2560 353 KB
This is the brains of the system. Asco 600 amp transfer switch. Early 2000’s microcontroller based system monitors the grid voltage and starts up the generator if things go out of spec, then transfers to generator(emergency) power once it has started up and stabilized. 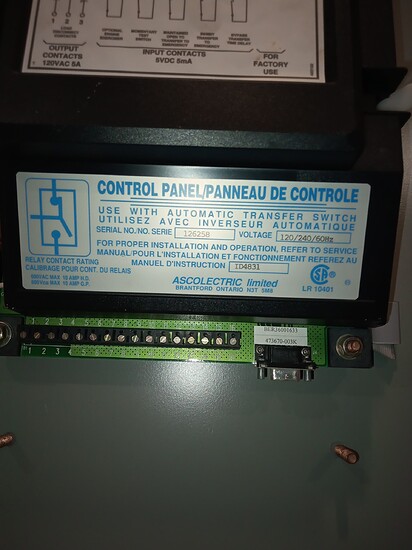 IMG_20210927_185543_4101920×2560 262 KB
It has input terminals for buttons in a remote location, and extra microswitches to sense the position of the big transfer switch. I have been thinking about using them to set up my own raspberry pi based cloud monitoring/control suite. Because the current panel is very “dumb”. If I leave the property, I have no way of knowing if my generator has come on or not while I was gone. Unless I go in and feel that the engine is warm. 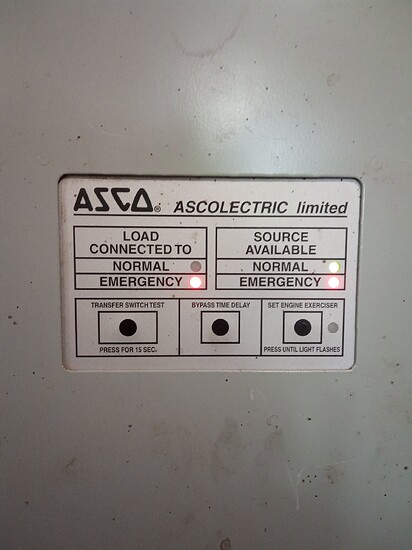 I have another idea. I have been paying attention to all the power outages we got the last 2 years. Most of them happened in bad weather, and most of them happened AFTER at least 1 brownout. It seems to me that if I can Monitor for brownouts, and poll the weather service radar map for storms. I should be able to automatically start the generator BEFORE the power goes out. If that worked correctly, I would have less than 3 seconds of outage when the grid actually does go down.
It isn’t really necessary to chase those extra seconds… All the sensitive digital hardware has battery UPS units. But it would be pretty cool.
Does that sound like a reasonable Devember project?

Hi. Yes your post is not necro, this is sick. God I want to see that system finished and working so we can steal it for our property xDD

It would be pretty hard to steal my generator and switch… You’d need a big trailer and some very big wire cutters. Plus you have to take a wall off the building. It was constructed around the generator.

Oh no, the design lol