Ever since I took apart my R9 Fury card I noticed that there was a ton of empty filter capacitor pads open in the solder mask, obviously being designed in, but was taken out from the production due to being overkill and to simplify/cheapen manufacturing.

I'm rather keen on soldering the missing capacitors back, as tandulum capacitors are dirty cheap more or less.

This is what the card looks like now, capacitors are obviously missing. Here is a few images showing the earlier/pre production model with all capacitors. 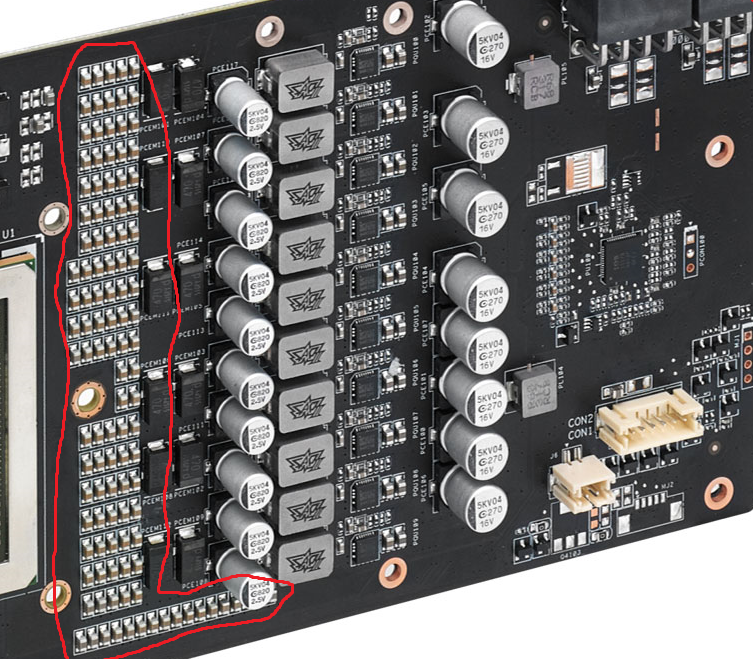 Just curious about feedback from any electronics engineer, I'm pretty certain the increased filtering would probably not make much if any difference, but I'm slightly worried about the increased capacitance throwing the PWM system off.

The other side of the PCB also has the same traces.

I would not have tinkerd arround with that. There needs to be a good reason why there were no capacitors.
But if it works, it is okay, I guess.

those provide you resistance of 100 nF to 10 μF

before changing i'd count them all, and see how much power can go into gpu.

The capacitance doesn't really matter all that much, the main reason they designed it with tons of tiny SMD caps is because many small caps usually yield lower ESR than fewer larger ones.

Only thing I'd be worried about is the polarity, somewhere around 1μF to 5μF with 2.4v rating would work well.

@CrossCarbon the reason they cut it from production was to cut down cost, Fury isn't suppose to be a flagship uber expensive card after all.

I'm not worried about the soldering part though, I'm pretty experienced with electronics, made plenty of stuff over the years.

Why? As in why would you risk it?

Also if these are empty then surely there is no power flowing through the area, does this have a bypass? So would adding them back then have two paths for power?

i'd like to see it, i remember the radeon 9800 acted strangely once you added capacitors ~> it was showing more memory than it had. ( i assume some dies were disabled as faulty, and lil more power woken them?)

Its just part of the PCB, and it does have power through it.
There is no bypass, all those capacitor pads are used for filtering, capacitors are put in parallel with each other on a single rail, this is the rail that feeds the gpu core.
Adding in more capacitors would only lower the voltage ripple slightly and make the whole power delivery slightly more stable.

This card as 3 main voltages, vcore is the rail that feeds the CPU with power, vmem is the one that feeds the memory with voltage and VTT which is the voltage the bus between the memory and memory interface uses.
The capacitors I'm speaking of belong to the vcore rail, which ranges from 0.9v to around 1.2v.

@anon5205053 Such a old card might have been playing weirdly with cap mods, I have done capacitor mods on other cards before and I never noticed much other than very slightly minor just tidbit better overclocking capacity, though the 8600gt I tried it with along with a vmod and some other things really overclocked well.

Also I already unlocked a extra set of CUs so my card is between a normal Fury and Fury X in shader count.

Just googled some OCs for that thing, and hory shit that card was sanic fast OC.
Though keep in mind I was around 10-11 years old when that card released, I had a 7800gt card that I overclocked though, found it in the junkyard in 2007 along with a AMD 3200+ that I also overclocked, ayy.

That card had no limits, you could clock it till the end of the time. All you had to do is install additional capacitors, and resistors. (I was 17 when i brought it but card stuck with me for quite a while)

Super capacitors aren't needed, I'd almost say that such a high capacitance isn't desired.
You can find lower ESR in a lot of other capacitors anyway, super caps are more for battery like energy storage than filtering.

I can see now why the dropped it from the production run, each side has ~125 or so capacitors.
They also appear to be of the 1206' type.