I have long been putting together my new setup, and knew exactly which monitor I wanted, more specifically that Samsung super ultra wide monstrosity, but low and behold, just as I was about to buy, there were rumors of a new model, the same in size, but instead om 1080p, 1440p. (so far I’ve been unable to determine anything in regards to hdr and freesync)

Of course I couldn’t go with the old when the new was just around the corner, so I’ve been waiting and waiting, and quite frankly I’m getting pretty tired of waiting, not least due to the crappy tn panel I’m currently using, which has led me to reconsider

So I was thinking, how much of a difference does it actually do?
My current monitor is 24" FHD, and I need to get rather close to really notice any rugged edges and such. Granted I’ll be adding 3" to those 24", but that’s not all that much… Not really.

Well, I can’t decide, so of course I’ve been looking at recommendations, among which are apples retina standard, stating that you should keep a distance of at least 42" to a FHD 27" monitor, to get the retina experience, which I’m sure is exaggerated anyway. I’m sure some people benefit from going to the extremes, but most don’t I’d wager.

In any case, I haven’t really had a desktop for years, and thus have little experience.

Would you prioritize a higher frame rate (or something like that) and be willing to settle for a little less than perfect?

What are your recommendations?

Edit:
I’m looking for an all round monitor really, though I don’t really care much about them super high refresh rates, though I do care about stable refresh rates.
As for my Graphic card, an asus something or rather vega 64 8bg, should be sufficient for my purposes, I think.

What do you use your computer for? If you’re a programmer looking for more real estate, you’ll go a very different route than someone who plays shooters or racing games.

Secondly, do you have a video card capable of driving 1440p at sane refresh rates? (Connector standards matter!) Jumping up to a higher resolution without a card that can drive it smoothly is a surefire way to hate using your computer.

…which is really hard to do these days with limited stock in the few bricks and mortar stores in most locations.

As far as gaming goes I always felt higher FPS and refresh rates at 1080p better than lower at 1440p, but for everything else a quality 1440p IPS or similar panel is hard to beat.

OP has been edited accordingly.

You are indeed correct. I’ve found it very hard, even though I do have access to some fairly nice stores, to be able to make a comparison in person.

I would recommend 1440p and keep your FHD as a secondary. The higher resolution does make a difference. I’m using a Samsung 100hz 3440x1440 with a dell 1080p monitor as a second monitor, both are on monitor arms so I can move them around as I need to. If you do wait for the super ultra wide 1440p monitors (Samsung won’t be the only one to offer one) and you do play games, then you will need a top tier card. I’m using a 1080ti and it won’t run most AAA titles at the full refresh all the time. At least not on the highest settings. You’ll have to adjust some of the antialiasing for smooth frame rates. But, depending on the pixel density of the monitor, 1440p starts to approach the point where you don’t need much antialiasing.

Should I decide to play a really demanding game, I can simply do it in 16:9 or 21:9, that should help a lot.
It’s is true that Samsung are not the only ones, but if I want HDR and Freesync, they probably are, and I rather do want it.
Also, worst case scenario, I can live with anything above 30 fps, if I really have to, so I’m not too worried.

My only real concern is spending a shit ton of money on a monitor, and not really being able to tell the difference from the lower resolution model.

As for my current monitor, that will either be sold, given away or go in the trash… Well, probably the basement,in case of emergency, but suffice to say it will never become my secondary monitor.

The difference between 1080p & 1440p is not always as big as you might imagine. Indeed, moving to higher resolutions puts less burden on the CPU and more on the GPU.

If you use your computer for nothing but gaming, get a higher refresh rate. The higher refresh rate only gives you a benefit while playing videogames. If you use your computer for other things, get at least a 1440p screen, the extra resolution is great for games if your GPU can handle it, but more importantly the extra realestate makes a big difference for non-gaming tasks.

But the 144Hz refresh rates makes gunplay noticeably easier in those kinds of games. If you’re playing FPS, or any kind of ‘twitch’ game, the high refresh rate can make a difference. If that’s not important, and you care more about the retina experience, then stay away from an FHD 27" panel.

a factor a lot of people never consider is “how good is your vision?” if the answer is not perfect then that + viewing distance might mean higher resolutions may not even be noticed.
played around with a lot of monitors at home and work and 1080 at 27 isnt noticeably different then 24 in 1080 and barely perceptibly different then a 1440p 27 to my non perfect eyes.

so yea how good can you see?

This is a very good point. My best friend will never truly understand the joys of 2160p because he is an old fart.

High refresh rates are only of value to me in certain games. Although I can contrive specific artificial situations where the difference can be seen, I can’t feel any difference between 120Hz and 144Hz during normal gameplay, so the screen runs at 120Hz all the time.

My network lag dwarfs display input lag, so I don’t reap any benefit (from having a high refresh rate display) on that front. YMMV.

FreeSync/G-Sync are of no noteworthy value when your rig can deliver high frame rates and your display can run at high refresh rates.

A 1080p display requires you to push fewer pixels than a 1440p display. Fewer pixels means higher FPS. Depending on how many FPS you, personally, feel results in an enjoyable experience in the games that you play, that means you can enjoy smoother gameplay and either save money with a less powerful graphics card, or get a few more years out of a good graphics card.

To preserve my eyesight, I sit back from the screen (~1.4m/56"). In many (many) applications and games, the default UI was too small on a 27" 1440p display. Most of those apps/games had scalable UIs, but the way that many of them implemented scaling resulted in blurriness. Changing the game to run at non-native resolutions (i.e. running a 1440p display in 1080p mode) also resulted in blurriness.

If money is no object, then buy the things with the biggest numbers, in the biggest box, with the most marketing bullet points. You will waste around half of your money for no tangible benefit whatsoever, but at least you’ll feel good about your purchase and will have bragging rights for a few months — until they release something better.

If you don’t have unlimited funds, care about your eyesight, and have enough room, then consider a setup that moves you a bit farther back from the screen. If you go that route, then 1080p will let you better handle UI scaling issues and deliver higher FPS. You are better off spending money on a legitimate high refresh rate display (anything ≥ 90Hz) than on FreeSync/G-Sync.

Hopefully there’s something of value in amongst all that.

To preserve my eyesight, I sit back from the screen (~1.4m/56"). In many (many) applications and games, the default UI was too small on a 27" 1440p display. Most of those apps/games had scalable UIs, but the way that many of them implemented scaling resulted in blurriness. Changing the game to run at non-native resolutions (i.e. running a 1440p display in 1080p mode) also results in blurriness.

If money is no object, then buy the things with the biggest numbers, in the biggest box, with the most marketing bullet points. You will waste around half of your money for no tangible benefit whatsoever, but at least you’ll feel good about your purchase and will have bragging rights for a few months

Of course I don’t have unlimited funds, but I do have enough for whatever I want.
as for HDR, I know that it’s not all that it’s cracked up to be, I’m not fooled by the marketing. However, that is not to say that it’s useless.
As for FreeSync, I cannot say that I know too much about that, but if I can get it, I want it.

I quickly getting to the point, where I’m not convinced that resolution is really an issue, and refresh rate and update times, certainly not, but there are of course other factors that come into play, and until the new model(s) come out and we have all the data, perhaps even a review or two, it will be hard to say for sure if it’s a waste of money or not.

And it’s all useful. 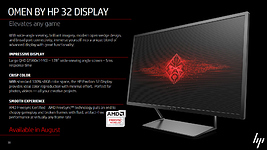 My priority is Photoshop and 3D modeling. But in gaming my GTX1070 is able to keep the screen pegged at 75fps most of the time. 75Hz is much better than 60Hz. Better than expected.

That is all well and good and thank you for the recommendation, but I really do want a 32:9. I need the real estate, ultra wide isn’t really enough and 2 monitors, forgetting for the moment that I don’t really have room for 2 stands on my small desk (that is after all a problem with a solution), would drive me insane, due to the middle bezel.