Hi everyone, I’m a sort of sys ad “jack of all trades” everything guy at a large university in the southern US working in a medium sized scientific research department that has an operation most similar to a small business. I’ve only been in the role for about a year after my boss retired and since then I’m the only IT person for the department. My boss was fond of Apple, and I am too. But, upon it being my responsibility to manage upwards of $40 million in research data at 35TB+ in size I was uncomfortable keeping it on what he had setup roughly 8 years ago: a hodgepodge of Mac minis and an Xserve along with about a dozen OWC hardware RAID arrays connected over eSATA/USB/FireWire. Well… at least it was in a 3-2-1 backup structure!

Funding is tight and I have to argue for every IT expense I need. Purchases from places like eBay are completely out of the question so I purchased and donated approximately $2,500 in level1techs inspired refurbished enterprise servers from eBay and got to work replacing the old infrastructure. The drives were purchased by my department.

My main goal was to get the data on ZFS and OFF the crappy OWC hardware RAID arrays. Those things were AWFUL. As @wendell mentioned in one video, you have to know where the bodies are buried, and with the OWC arrays it was obvious the bodies were buried in hardware RAID. The arrays would disconnect randomly, had no alert system, had no ability to troubleshoot, my boss had many in RAID0, and as I found out later as I cannibalized their drives many drives were in the process of failing with dying sectors and had absolutely no warning signs from the arrays.

I went with FreeNAS for its ZFS ease of use and simple replication abilities. I was already familiar with it from running it in my homelab and I guess I’m just a sucker for web UIs. 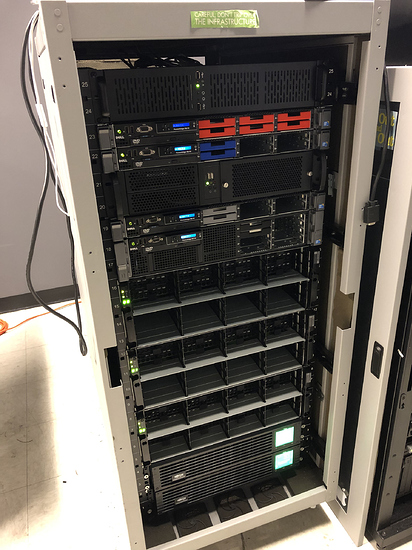 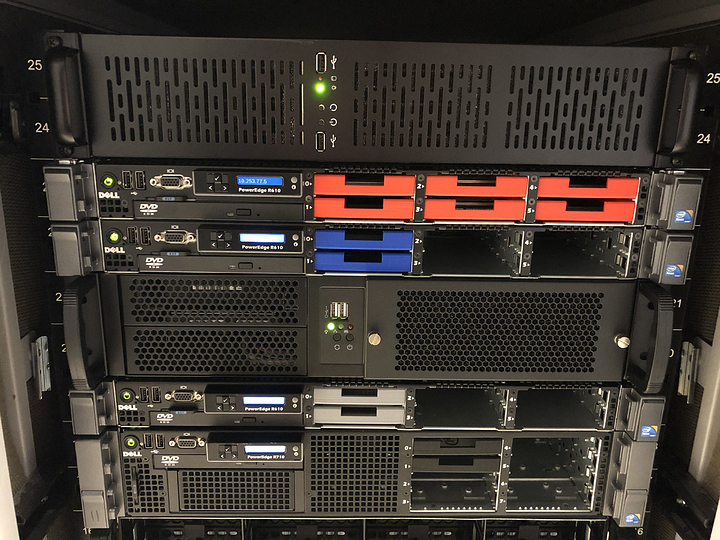 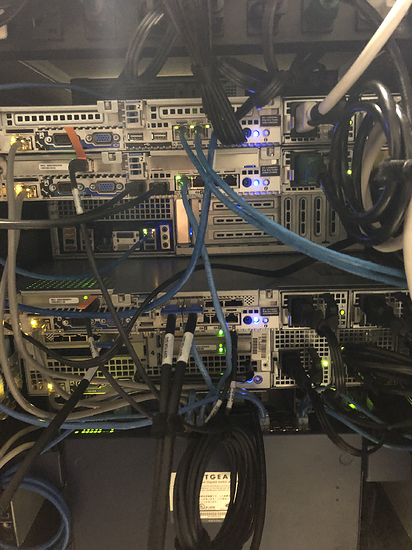 3d printing:
You might get lucky and get DS4243s from eBay for a reasonable price with their disk trays included, but from what I saw $150 tray-less sales were much more reliable. I actually bought a lot of 100 trays for $300 but after realizing I could make use of my 3d printing hobby to design and print trays myself I resold them.

I designed a disk tray compatible with DS4243s using TinkerCAD and printed them using my WanHao i3 Plus. They’re designed to not restrict airflow and use a minimal amount of printing material. You can print two at a time which takes 7 hours and costs $0.48 each. 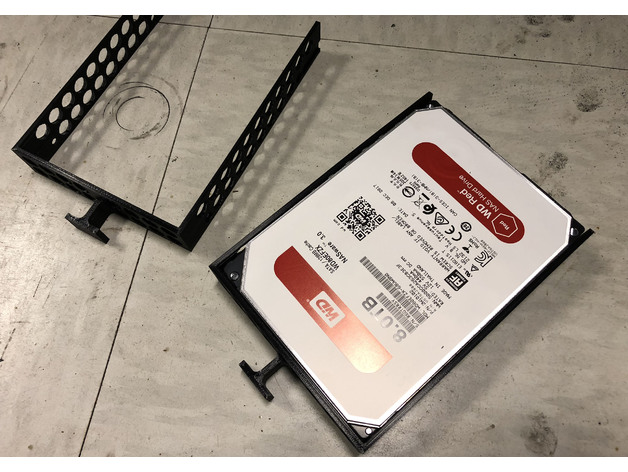 Disk trays designed to work with NetApp DS4243/DS4246 disk shelves. After five versions I'm finally happy with the design. Empty circles are added to decrease the print material and time required while at the same time not impacting rigidity. I've... 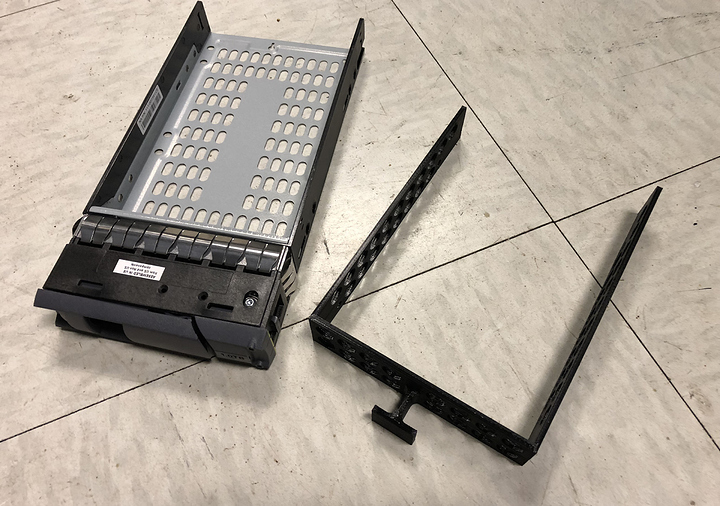 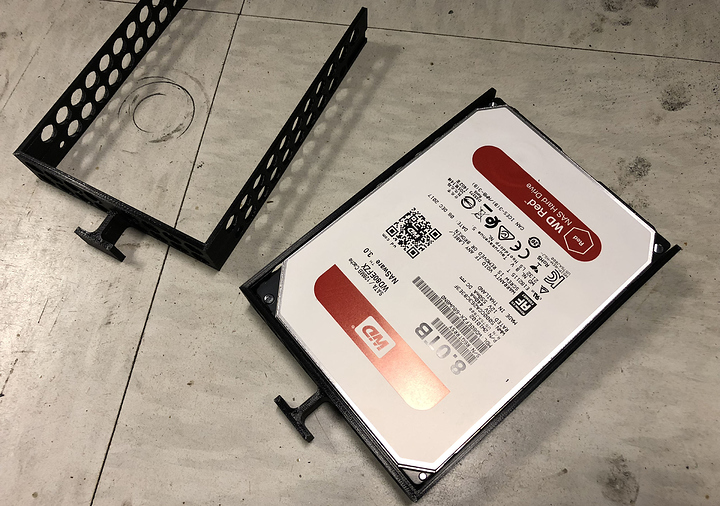 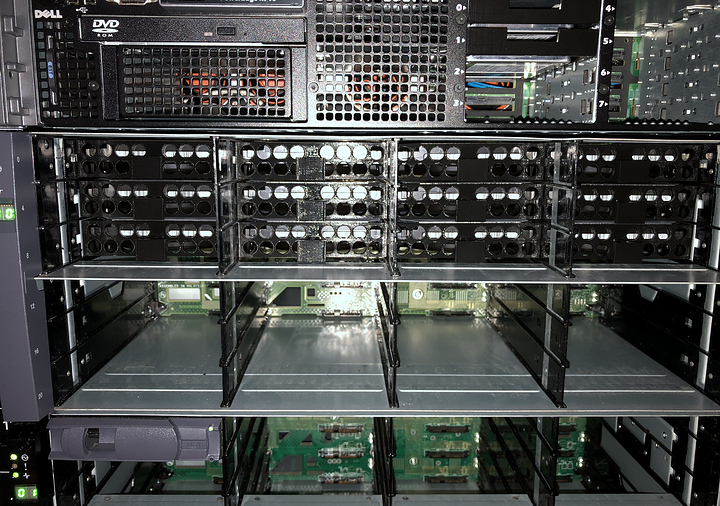 I also modified a design already on Thingiverse for PowerEdge R610/R710 disk trays which cost $0.30 each to print. You can see those, color coded, in the above hardware pictures. 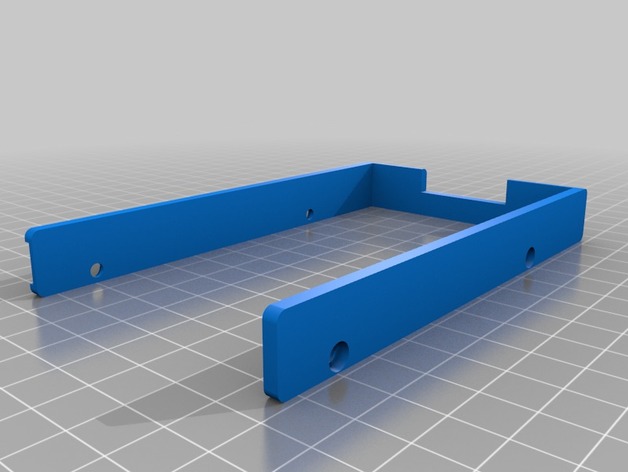 I’ve had zero issues with these 3d printed disk trays.

Backups:
The primary FreeNAS server replicates to the on-site backup AND the off-site backup which is located across campus.

Initially I had problems with this because FreeNAS’ built-in replication is over SSH which regardless of encryption level was capping out around 125 Mb/s. The 35TB of data would’ve taken over a month to do an initial backup. This issue was present even over the 10 Gb connection between primary-backup, but I never figured it out. Instead I used netcat to zfs send recv the first ZFS snapshot to backup over the directly connected primary-backup 10 Gb. This worked wonderfully and I was able to max out at 3 Gb/s which is only the max because the DS4243’s IOM3 modules.

Another problem I ran into was wrongly assuming my disaster recovery server had a gigabit connection. It ended up being a 60 Mb/s connection. One amazing feature of ZFS though is the ability to export and import pools so after doing an initial netcat zfs send recv over direct attached 10 Gb I exported the pool and sneakernetted it across campus where I imported it into the disaster recovery server. 60 Mb/s hasn’t been an issue with continuing replication.

Restores:
In the planning stages less restores and faster restores was one of my major goals (duh!). My FreeNAS storage cluster is a MASSIVE upgrade in this regard. Previously if one of the OWC hardware RAID arrays died restoring from backup took at least 2-3 days if not more. During my boss’ last day an OWC array did die and restoring the ~4TB of data took from Friday afternoon to Monday morning over its eSATA connection. Have I stressed enough how shitty those OWC arrays are? 3 days of downtime was, in my eyes, professionally unacceptable.

With the new setup an array/vdev failure is much much much less likely because the lowest RAID level is RAIDZ2. In addition I have FreeNAS email alerts setup so I can be alerted when a drive is in the process of failing and can be replaced before failure. Even if I had the primary pool fail an entire 35TB restore should take only 1.5 days from backup.

Don’t forget–with ZFS even if the drive is lying about its health you’ll be alerted to checksum issues when the scrub runs. You might think drive schizophrenia isn’t a thing but since I’ve worked here for approx. 5 years I’ve seen at least 3 drives that have all the symptoms of failure but come up completely clean in SMART. Trust in ZFS!

Virtualization:
I went with the new FOSS fork of Xen, XCP-NG because I had issues running Proxmox on this hardware. I use Proxmox at home, but with the R610 and consumer SSDs I was getting extremely high I/O delay. After many weekends troubleshooting I switched to XCP-NG and haven’t had any issues. Some VMs I run:

Other servers:
You might have noticed two black 2U servers in the above pictures. One is my technician FreeNAS 10TB server where I keep images, software, isos, etc. The other is an experimental BlueIris server not in use yet.

40 million $ worth of research data, and ze bean counters can’t see why it might be worth it to invest in some nice new reliable hardware?
But I guess spreadsheet riders are incapable of common sense

Good for the researchers they have you to protect their data

Cool write up my dude.

In my job I am damn thankful that my boss and others I may have to convince to get new network/server kit are very understanding.

As Donk said, the researchers are very lucky to have you around!

capping out around 125 Mb/s

That’s what I would expect writing to a pool consisting of a single vdev.

Maybe 125 MB/s but 125 Mb/s is extremely slow. The single 12x 8TB vdevs pushed 3 Gb/s with netcat so I don’t think it was vdev performance related.

Yes IT is unfortunately seen as an expense around here and my department is already on the poorer side. I suspect that is because the main focus of the department is academics (undergrad and grad teaching). Other departments, especially those that are exclusively research, have much more cash and are wasteful with it.

Still, I think I’m working with one of the best departments on campus. I like the faculty I support and my co-workers are generally good to work with.

Although I will try to always stay in higher ed because I like working with faculty and research, I’m not sure I can stick around here for a decade like I thought I would be originally.

I’m glad I’ve been able to rebuild the department infrastructure from the ground up in my vision though. It has been a great opportunity to learn and has really beefed up my resume. Besides the storage cluster I’ve designed and built an Active Directory environment where there previously was nothing but local logins.

not trying to be a dick but this books might help

Thanks for the suggestion. I already own ZFS Mastery, but I see they went down in price so maybe I should pick up the Advanced one too.

Edit: My mistake I was looking at the Kindle pricing

It really is amazing that for $2500 in refurbished enterprise equipment and $5000 or so in drives you can build a 500TB raw storage cluster that would’ve costed half a mil in 2005. I think it is a solid testament to ZFS and open source. I give massive props to Dell too for still supporting 8 year old hardware with continued updates.